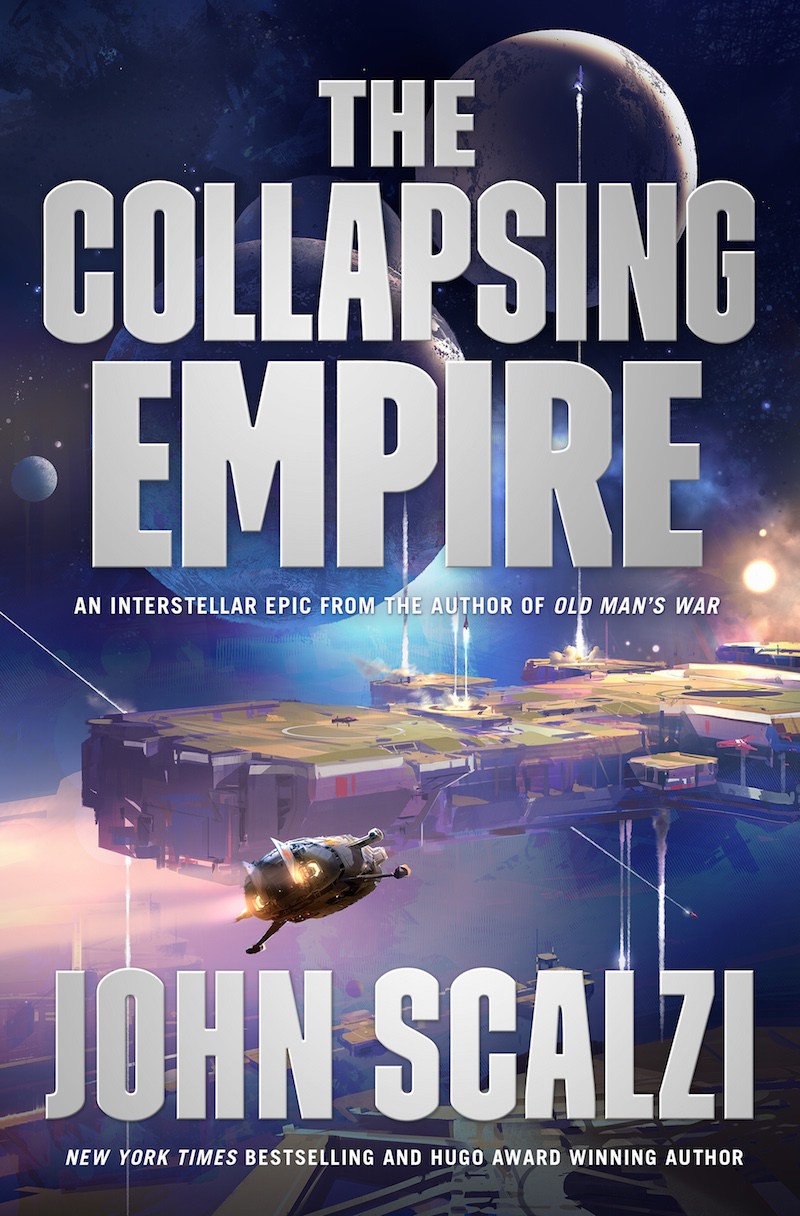 The first novel of a new space-opera sequence set in an all-new universe by the Hugo Award-winning, New York Times-bestselling author of Redshirts and Old Man’s War.

Our universe is ruled by physics and faster than light travel is not possible — until the discovery of The Flow, an extra-dimensional field we can access at certain points in space-time that transport us to other worlds, around other stars.

Humanity flows away from Earth, into space, and in time forgets our home world and creates a new empire, the Interdependency, whose ethos requires that no one human outpost can survive without the others. It’s a hedge against interstellar war — and a system of control for the rulers of the empire.

The Flow is eternal — but it is not static. Just as a river changes course, The Flow changes as well, cutting off worlds from the rest of humanity. When it’s discovered that The Flow is moving, possibly cutting off all human worlds from faster than light travel forever, three individuals — a scientist, a starship captain and the Empress of the Interdependency — are in a race against time to discover what, if anything, can be salvaged from an interstellar empire on the brink of collapse.

Stand alone or series : Book 1 in The Interdependency series

How did we get this book: ARC from the publisher

I recently read – and loved – Zoe’s Tale by John Scalzi and after reading The Collapsing Empire, I can finally say I found a new author to truly love. Whereas his earlier work in the Old Man’s War series reads like old school plot-driven Science Fiction a la Heinlein (and we know how I feel about Heinlein), this new book reads much more like character-driven modern SciFi a la Ann Leckie and I really dig that.

It’s hundred of years in the future and humankind is united in an interstellar civilization. The Interdependency is ruled by an Emperox, maintained by merchant Houses and interconnected by The Flow, an extra-dimensional, wormhole-esque field that gives access to ships to travel from one system to the other. But The Flow, once thought to be eternal and safe, is actually not static – and is in the process of collapsing, and bringing down the whole of the Empire with it.

Cardenia is the new Emperox, the daughter of the previous ruler, brought up far away until the unexpected happened: her older brother and rightful heir dies unexpectedly. Now, the unprepared child is the one to rule them all. Cardenia is quietly reserved, smart and determined to do well. She is also not so sure the Interdependency is a good thing.

Enter the pending collapse, the news brought to her door by Marce, a traveling scientist from End, the farthest colony in the Empire. And it is in End, that a game of Doom Chess is played by competing Houses – one of which ran by Lady Kiva and her family. Each conniving House has different information which makes for fun-tastic stuff and with results that will have repercussions all over. And those repercussions spell T R O U B L E. So much trouble. Is it possible to put ambition to one side and think of the greater good? What is the greater good and who decides it? Most of all, how do we save the entire universe? These and other political, social and economics questions are asked n what is slow-moving, slow-burning talky gem of a novel that keep me glued to its pages. There is drama here – and some heartbreak with a keen sense of loss – and a feeling that the worst is yet to come. Regardless of that feeling though, there is still much in there that is not only coloured with humour but also with optimism. And I really dig that too. As much as I love the fact that the all the power players in the novel are women.

The smartest thing about The Collapsing Empire, is that it starts at a point where most series would lead to: the realisation that an Empire is a corrupt lie and needs to be brought down. In here, this is only but the start of the series and this book is therefore the definition of foundational: introducing the characters and the world in an appetiser that left me only wanting more. A lot more. I’d like a bazillion more pages featuring Lady Kiva swearing like a sailor and fucking her way around the collapsing Empire of doom, please and thank you.

OK. Real talk. I am a fan of John Scalzi’s, and so far this year Ana and I have thoroughly enjoyed (re)reading the Old Man’s War series. In comparison to that series–which is indeed, as Ana puts it, super golden age plot-driven science fiction–The Collapsing Empire is a different reading experience. I agree that this newer novel feels a lot more character-driven and in-line with what is out on the market and doing well in science fiction today, which is awesome for many reasons.

BUT. There’s a but. The Collapsing Empire takes a phenomenal premise–the imminent collapse of The Flow and the subsequent shift in the balance of intergalactic power as the empire currently knows it–and tips its hand far too soon without any of the necessary payoff. In other words: you know what’s going to happen in The Collapsing Empire by the conclusion of the novel’s first 100 pages… and then the book doesn’t actually deliver on any of that premise and sort of drags along to an inevitable ending. This is purely a setup book. It doesn’t actually show any of the stuff we want to see (e.g. the actual collapse of The Flow), and instead feels very much like the science fictional space opera equivalent of a “Winter is coming” warning that will be protracted over several volumes, episodic cliffhangers, and Scalzi’s trademark wry sense of humor. That’s not necessarily a bad thing… but I wanted much more. One of the things I love so much about Scalzi’s Old Man’s War books is that they each feel like self-contained adventures that link to a much larger picture and overarching story–you could read each book independently, and while you probably wouldn’t have the same level of overall appreciation of character and story arc, you could still be thoroughly sated with the adventure and characterization contained in each single volume. The Collapsing Empire, on the other hand, is a place-setter: we know that The Flow is going to shift, we know that the current Emperox has got to deal with this reality, and we know that a plucky pirate ship captain and a naive backwater physicist will be involved in that mix. The Collapsing Empire is like the pilot episode of a particularly promising series–say, The Expanse–but doesn’t offer much beyond the coolness of an initial premise. (For reference: Scalzi has a 10 year, 13 book deal with publisher Tor: this very much feels like it’s trying to draw out each one of those 10 novels.)

Don’t get me wrong; the premise is super cool. And I like the fact that Scalzi tries to go beyond the superficial in this book by examining the social, economic, and political undercurrents that have been carried by The Flow throughout the interconnected worlds of the Empire. The key concept here is that each world on the shoals of the Flow is part of an interdependency that requires connection to survive. Planets in the Empire have specialties in terms of resources, and only through mercantile-regulated intergalactic trade can each planet sustain its respective population. The entire setup of the Empire is a carefully regulated power play concentrated in the hands of a few merchant family nobles, the church, and the Emperox–those who are at the heart of the Flow’s most prominent channels, and who can control ships that enter and leave the Flow from their ports. Since no one really understands the Flow, and since the Flow is a one way stream of unmutable entry and exit points, those who control the ports control all. This is, as I said before, undeniably cool–I just wish we actually got to see some of it, instead of the buildup of impending doom with no real emotional, action-driven, or even character-driven payoff.

And on that note, the character front reflects a lot of my emotions towards the plot and world: great in theory, but lacking some much-desired depth. There’s the Emperox who never wanted to be leader but who grapples as best she can with her new role (probably my favorite character of the bunch); there’s the aforementioned swearing like the pirate captain she is ship leader, who enjoys employing sex as a method of tension release (which is awesome to read in a female captain figure on the one hand, but quickly also becomes a little repetitive and boring by novel’s end); and there’s the wide-eyed physicist who comes to warn the Empire about its impending doom and gets swept up in the ebb of imperial politics. Each of these characters are interesting in their own right, and each are given an equal amount of screen time as their alternating narratives intertwine; my only hope is that they become more nuanced and interesting beyond their archetypal character sketches in future books. Oh, yeah, and the main villain character–no spoilers–is pretty cool, too.

Overall, The Collapsing Empire is a solid first book in a series and I’ll be back for more… but I hope the next book isn’t quite as formulaic as this first one.