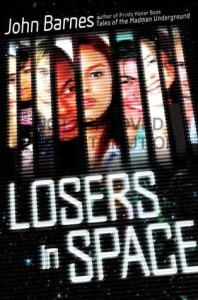 Susan and her friends are celebutantes. Their lives are powered by media awareness, fed by engineered meals, and underscored by cynicism. Everyone has a rating; the more viewers who ID you, the better. So Susan and her almost-boyfriend Derlock cook up a surefire plan: the nine of them will visit a Mars-bound spaceship and stow away. Their survival will be a media sensation, boosting their ratings across the globe. There’s only one problem: Derlock is a sociopath. Breakneck narrative, pointed cultural commentary, warm heart, accurate science, a kickass heroine, and a ticking clock . . . who could ask for more?

Why did I read this book: This book has been on my radar for a while, but I was hesitant to read it because of the admittedly PG-comedy type of title. Then, I read Leila’s awesome review over at Kirkus, and I knew that I had to have it. Immediately. (A hard SF YA novel?! FINALLY!)

Let me preface this review with a warning: I loved this book. Intensely. Fangirlish gushing ahead.

It is the year 2129, and Earth has changed. It is a peaceful place, without war or strife, and everyone lives a comfortable lifestyle of leisure thanks to a largely robotic workforce. While robots handle the bulk of humanity’s needs, there are some very key professions that still require a human touch; namely the arts/entertainment, athletics, certain elements of science (especially manned space exploration), or teaching. As such, society has been rejiggered into three main classes: eenies, mineys, and meanies.

The eenies sit atop the social pyramid – these are the celebrities, the uber-talented, and the super-geniuses. In order to become an eenie, one must pass a few incredibly difficult tests – they must excel in their studies and pass their culminating PotEval tests with flying colors; or they must be talented beyond compare in any entertainment field (sports, acting, singing, etc). Those that don’t measure up become eenies are mineys, who comprise the majority of society as the plugged in middle class that is happy to consumer entertainment on a massive scale, and whose living is subsidized by the government (don’t feel bad for the mineys – their yearly income is the equivalent of $2M in 2010). Those adults that do not fall into those two major classes of society (eenies or mineys) are meanies – convicted sociopaths, thieves, killers, and other assorted dangerous criminals.

Susan and her friends are the teenage children of eenies – and due to the strict laws that govern this new Earth, even the children of the elite have to work for their inheritance. This motley crew call themselves moes, aka losers. They aren’t talented enough or automatically famous enough to become eenies, and the deadline for them to make the jump to eenie status is rapidly approaching (i.e. if they don’t achieve a high enough recognition score, maintained for a full month by the established age deadline, they are screwed and destined to be mineys). Instead of becoming eenie by way of exceptional talent, Susan decides to go along with her almost-boyfriend Derlock’s get-famous-quick scheme – to stowe away aboard the Mars-bound ship Virgo, thereby breaking the law but instantly becoming so famous that she and her friends will be immune from any nasty consequences. Though the plan is dangerous and technically illegal, Susan and the rest of her moe friends know it will work. And everything goes basically according to plan…until Virgo is rocked by an unforeseen explosion, killing the crew and knocking the ship off course and out of orbit. With finite resources and slim chance of rescue in the cold vacuum of space, Susan and her friends struggle to survive aboard their crippled ship, and with each other.

Dudes. DUDES. I freaking adored this book. Let me put it out there first by saying that I am an unabashed dork for exposition done well, and I love me some good hard science fiction. Losers In Space is predicated on the current laws of physics – in the words of author John Barnes as he explains his brand of SF, in our universe when Superman leaps over a building in a single bound, he must drill a hole into the sidewalk when he lands. In Losers In Space, the Virgo cannot be “rescued” by interplanetary rescue boats because there is no way for them to know where the ship is, and it would take months – even years – for a rescue ship to come from Earth or Mars to intercept Virgo in her off-kilter new orbit.

(I hope I’m getting this right. I might love reading this stuff, but a scientist I most assuredly am not.)

Guys, I freaking LOVE it when there are rule systems in place for speculative fiction – not that I don’t love the Roddenberry brand of scifi, but it is infinitely cooler to read about space travel in the context of the actual laws of physics and plausible technologies. THIS is where Losers in Space excels. John Barnes not only creates a world that is plausible in terms of societal structure (albeit with cheesy nomenclature – eenie, meenie, miney, moe, anyone?) and space exploration, but also makes sure to explain the principles behind the technology and the rationale behind our intrepid heroes’ plight.

Don’t let this talk of science and explanation turn you off, though. For those that are not interested in the principles of space travel, you’ll be happy to learn that all of this explanation and exposition is not included in the story proper. Rather, Barnes allows the narrative to proceed with minimal science lecturing – those details and explanations are parsed out into separate sections (“Notes for the Interested”) that are interspersed throughout the story. If you’re interested in the blatantly infodump-y science lecture, you read the note. If not, you can move on and enjoy the overall story without being subjugated to a physics lesson. (I liked reading the notes, even if I had a hard time comprehending all of the principles. Your mileage may vary!) It’s a very clever, elegant solution that should appeal to readers of all ranges of scientific expertise, and I really admire that.

But enough of my babbling on incoherently about the virtues of footnotes and hard SF! What about the story and the characters? In these respects, Losers in Space also totally rocks. I love the concept of the world and the rationale behind these “losers” taking to a drastic scheme to get famous quickly by doing something very stupid – hey, these are celeb-brats trying to get on the “meeds” (think…TMZ/YouTube of the future) as quickly as possible, with the least amount of effort. I love the concept of this utopian – but really, ultimately dystopian in a sort of Eloi-ish way – world, where conflict has been eradicated at a fantastically high cost.

Once the drama in space finally hits and Susan and her friends are struggling to stay alive and figure out their best chance for survival and rescue, I loved the tension that unfolds between the new crew members. This is where character comes in too, because while each of our protagonists starts out the book as decidedly UNlikable, they grow and change so dramatically when they are forced to take their lives into their own hands. Susan, our narrator heroine, in particular has an astonishing character arc, metamorphosing from apathetic hot brat chick to capable, brave, and keenly intelligent leader.

Honestly, there’s very little NOT to love with Losers In Space. There’s a dramatic, action-packed plot, involving some truly great characters with their own flaws and strengths. There’s the satirical quality of the book, explicating our own society’s fascination with fame and infamy (and, though I don’t agree with it, some not-so-subtle commentary regarding Intellectual Property and the current judicial system). Of course, there’s the glorious plausible well-researched and impeccably explained science. Wrap that all together, and you get one hell of a book.

I loved Losers In Space truly, deeply and passionately. Chalk it up to another book on my Top 10 of 2012 list. Absolutely recommended to readers of ALL ages.

I STAGGER TO my feet, bumping into Emerald, almost falling across Glisters, who is on his hands and knees; we’re standing on the tail-end bulkhead of the Pressurized Cargo Section, way down at the crew-bubble end of the pod. We slammed down hard; this sudden new gravity feels like more than the moon’s.

My vision starts to come back through the red and orange blur; I see Fleeta, who is standing in front of me and moving her mouth. Sounds are muted; I’m deaf from that immense boom. After long seconds, her shouting, “What happened?” penetrates through the ringing in my ears. Emerald is shouting, “I don’t know.”

Glisters’s voice starts to penetrate. “Grav is about one-fifth g and I think we’re turning over in less than two minutes, so that makes it, um… um…” I realize he’s talking the problem through, turn and see him punching away at his wristcomp. I join the shout fest: “Everyone shut up and listen to Glisters!”

I’m pretty sure no one has ever even thought that sentence before, let alone shouted it. Maybe that’s why Glisters is standing there with his mouth hanging comically open. I try to reassure him with a smile and a wink, styling Best Bud Chick; the way he looks back at me, I must be styling Crazy Spastic Zombie.

At least I can hear a little now. “Loudly and slowly, Glisters, and start from the beginning.”

Reading Next: The Silver Bowl by Diane Stanley

Book Review: Except the Queen by Jane Yolen & Midori Snyder