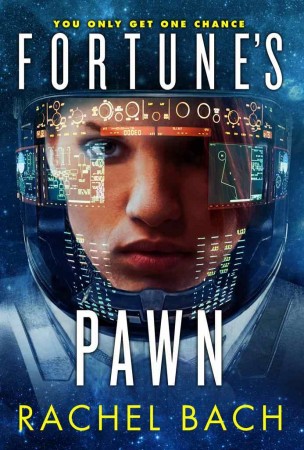 Devi Morris isn’t your average mercenary. She has plans. Big ones. And a ton of ambition. It’s a combination that’s going to get her killed one day – but not just yet.

That is, until she just gets a job on a tiny trade ship with a nasty reputation for surprises. The Glorious Fool isn’t misnamed: it likes to get into trouble, so much so that one year of security work under its captain is equal to five years everywhere else. With odds like that, Devi knows she’s found the perfect way to get the jump on the next part of her Plan. But the Fool doesn’t give up its secrets without a fight, and one year on this ship might be more than even Devi can handle.

If Sigouney Weaver in Alien met Starbuck in Battlestar Galactica, you’d get Deviana Morris — a hot new mercenary earning her stripes to join an elite fighting force. Until one alien bite throws her whole future into jeopardy.

Stand alone or series: Book 1 in the Paradox series

Why did we read this book: Because it sounded and looked awesome. SciFi Romance FTW!

Devi Morris is an ambitions mercenary with big plans to climbing up the ladder of merc success (to infinity and beyond!). The next step is to accept a job on the Glorious Fool, a trade ship with a reputation for danger and for getting its security forces killed. But Devi knows this might well be her one chance to get a job working for the (all hail) God-king later.

And things go exactly as expected: Glorious Fool and its secretive captain end up getting into trouble after trouble. What is unexpected is that beneath the reputation and the danger, the Glorious Fool and its crew have secrets. Secrets that might well change Devi’s life – and not the way she hopes – if she doesn’t keep her head down and do her job.

But Devi is really not very good at doing the things she knows she should.
Oh, but Fortune’s Pawn was super fun and I love the main character, Devi, like whoa.

She is abrasive, cocky, ambitions and glories in her own fighting abilities – she is extremely good at her job and she is proud of it. I love that she has this impossibly awesome suit of armour and guns all of which she has named with girl names. We constantly talk about “powerful female characters” and make a case for how powerful doesn’t – nor shouldn’t – necessarily equal kick-ass and/or physically strong character. But sometimes it is great to read a novel where it does: I relish how Devi is allowed to be physically strong, to love danger and to fight, to be a heavy drinker, to be a card-player as well as sexually empowered. I also loved that she makes mistakes because of her hasty behaviour and that she has to deal of the consequences of it from hangovers to almost dying: being Devi is not easy.

If Fortune’s Pawn to me turned out to be a Devi’s Parade of Love, it doesn’t mean that other parts of the book aren’t equally good: like I said, this is a fun space opera with plenty of action sequences with Secret Conspiracies as different peoples compete for power, where there are friendly aliens as well as dangerous ones (same can be said for human characters). Plus a group of core characters – including several other female characters and a gender-fluid character – that have really great potential.

Speaking of characters: and then there is the ship’s cook, Rupert, whom Devi develops a strong romantic connection with and which is probably the one dissonant note in the story. Rupert is an enigma, he has Secrets and as such it is almost understandable that we know very little about him beyond Hot, Tortured and Unavailable. There isn’t a lot of “on screen” development of their relationship enough for me to buy into Devi’s sudden attachment beyond physical attraction. This is a problem because the emotional payoff of the second half of the book as well as its denouement depends so much on the reader buying into not only the attraction but the love between Devi and Rupert. And unfortunately that emotional pull was simply not there for me.

That said, the way the book ends leaves room for incredible character development in the next instalment and I can’t wait to see how Devi reacts to what happened in the end. I personally hope for plenty of punching and kicking.

I basically have to agree with Ana on almost all fronts. When I started Fortune’s Pawn, I was under the impression that it was a military science fiction book – a space operatic military scifi book, probably light on the physics but strong on the action, and in the vein of Elizabeth Moon or Lois McMaster Bujold (those are the two comparisons made on the ARC jacket, after all). In truth, however, Fortune’s Pawn is much more like an urban fantasy novel with heavy romantic overtones – it’s got action in spades, and a capable, wonderful heroine, but it’s also very centered around a romance with a super hot paranormal dude…just set in outer space, and not urban Chicago or what have you.

I don’t hold that against the book at all! I love Urban Fantasy when it is done well, and Fortune’s Pawn does a very good job at setting the world, creating a competent and layered heroine, and keeping the action going. That said, the romance wasn’t really my favorite – it’s very run of the mill, “I can’t have you because IT’S TOO DANGEROUS,” blah blah blah. To be fair, I actually felt that the romance is actually written well and develops nicely from sexual infatuation to uncontrolled desire for the thing one can’t have – I just personally am not a fan of the Tall, Dark and Brooding Romance trope. Your mileage may vary.

But onto the stuff that did work: namely, Fortune’s Pawn‘s heroine, Devi. I really, really liked Devi. She’s foul mouthed, tough, and completely self-possessed. She asserts her dominance and is driven by her burning ambition to become one of the elite soldiers in all the universe, she sleeps with whom she pleases, and makes no apologies for doing what she wants to do. THAT is incredibly refreshing. And, as Ana says, I appreciate that Devi has to deal with the repercussions of her actions – she’s reckless in battle, which takes a physical toll on her body (the scene after she’s injected herself with a cocktail of drugs to fight her last few minutes on a ship of death immediately comes to mind), she can be careless with other peoples’ emotions, which also comes at a cost. I think the thing I appreciate the most about Devi, however, is her ambition. All too often, ambition to succeed is painted as a Bad Thing (especially in female characters). I love that Devi knows exactly what she wants, that she’s worked her entire life to achieve that goal, and that she’s not going to let anything or anyone get in her way.

While Devi is a fully fleshed out character, there is also a diverse supporting cast that is less well-rounded, but intriguing nonetheless. There’s Rupert, the love interest, who Guards a Secret; the mysterious Captain, who has secrets of his own and whose status in political power Devi can only begin to imagine; the Captain’s quiet, chess-playing daughter (and her own big secret); the brutish security partner, the birdlike navigator, the lizard doctor, the dreamy psychically in-tune roommate, and so on… While all of these characters are superficially explored in this first book, there is PLENTY of potential for further development in the next 2 novels in the series.

The writing is zippy, the universe a little nebulous in terms of definition but generally well-conceived (plus, I know there’s potential for political implications in future books) – in particular, I like the division between Paradoxians like Devi and Terrans. While there isn’t actually an overarching conflict to this story (it’s more a string of skirmishes and discoveries Devi makes along the way on her ongoing security job with the Glorious Fool), things come together nicely as the novel progresses and Devi learns more about her Captain and crew.

In short: I enjoyed this book very much, and I’ll definitely be back for more.

Additional Thoughts: This month’s guest for our ongoing SFF in Conversation was author Rachel Bach. Rachel’s post, on writing Devi’s character, is fascinating and insightful. Check it out here: Upsetting the Default.

Over at Kirkus: The Last Policeman by Ben H. Winters