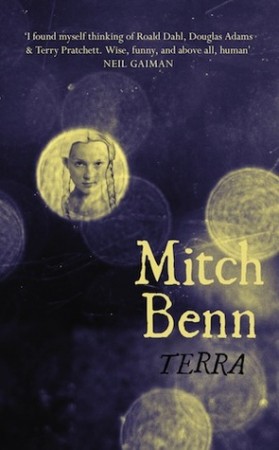 A science fiction fable for the young-at-heart from stand-up comedian and satirical song-writer Mitch Benn.

No-one trusts humanity. No-one can quite understand why we’re intent on destroying the only place we have to live in the Universe. No-one thinks we’re worth a second thought. And certainly no-one is about to let us get off Rrth. That would be a complete disaster.

But one alien thinks Rrth is worth looking at. Not humanity, obviously, we’re appalling, but until we manage to kill every other living thing on the planet there are some truly wonderful places on Rrth and some wonderful creatures living in them. Best take a look while they’re still there.

But on one trip to Rrth our alien biologist causes a horrendous accident. The occupants of a car travelling down a lonely road spot his ship (the sort of massive lemon coloured, lemon shaped starship that really shouldn’t be hanging in the sky over a road). Understandably the Bradbury’s crash (interrupting the latest in a constant procession of bitter rows). And in the wreckage of their car our alien discovers a baby girl. She needs rescuing. From the car. From Rrth. From her humanity.

And now eleven years later a girl called Terra is about to go to school for the first time. It’s a very alien experience…

TERRA is a charming and hilarious satirical fable. A story about how odd and alien we are. And a story about how human odd aliens are. It tells the story of a girl who grows up in a very different world, who gains a unique perspective on our world and a unique perspective on her new home. A girl who can teach us and them a lot. A girl living in an extraordinary world that is spiralling into a terrible war.

How did I get this book: I received an unsolicited copy from the publishers

Why did I read this book: When this showed up at my door last week my eyes immediately zoomed into the Neil Gaiman quote on the front cover. I needed no extra incentive to read the book.

11 years ago the Terrible Bradburys are out and about with their baby girl when in the middle of one of their regular fights, an alien spaceship comes upon them. They flee in utter panic, leaving their baby behind.

Undercover alien biologist Lbbp is researching Earth’s environment when he causes a terrible accident that leaves him with a human baby in his care. Without thinking too much he abducts her – after all, this is the right thing to do, right?

In a galaxy far, far away a young girl named Terra is about to start a new school year. She is the only human in the city of Hrrng on the distant planet Fnrr. As such, she has quite a few hurdles to overcome including the mistrust that most Fnrrians have for humanity. After all, how can anyone trust us? With our tendency for violence and our despicable mistreatment of nature, it is easy to understand why most alien races just stay as far away as possible. But Terra needs to prove that she belongs and that she is not a terrible person because in this world? Terra is the alien one.

I really enjoyed Terra but in my opinion that Gaiman blurb on its cover that compares it to Dahl, Adams AND Pratchett does it a huge disservice. It was the sole reason why I chose to read the book[1. I am aware of the irony as one could argue that the blurb did the book a service by selling it to me] (I did not know that Mitch Benn is a popular radio presenter here in the UK) and inevitably I had huge –and probably completely unfair – expectations. In a way, I understand the comparisons as the story does have a certain flair of Dhal when regarding the Terrible Bradburys, a bit of outlandish shenanigans in space a la Adams with a side of political commentary that reminds of (but is nowhere near as smart as) Pratchett. But even if this is a good enough for a debut author, it could never be as accomplished as the works of such luminaries. There is quite a lot of head hoping, clumsy dialogue and a weird change in tone from one section to another that didn’t quite mesh well overall.

With that off my chest: it is easy to immerse oneself in Terra’s obvious, jovial passion for stories, especially of the Sci Fi variety. It is with a zest for old school narratives that the author approaches his story and deals with issues of identity and of belonging. Terra is a great protagonist that embodies the need of being a part of something (where is home for Terra? Who is her family?) and so is her “father” Lbbp. Their relationship is easily the most emotionally engaging aspect of Terra ( I might have shed a tear or two). I think though that the tale excels the most when the focus moves to Earth at both ends of the novel because it is its satirical look at humanity that spoke deeply to me.

That said, the greatest part of the novel takes place in Fnrr and this is where things get a little wonky for me. On the one hand, there are astute observations about prejudice, self-awareness, education and technological especially when dealing with different races within Fnrr itself. I loved the commentary within the novel about different methods of learning especially when dealing with content being downloaded directly into kid’s brains without them understanding the hows and the whys.

On the other hand, the book certainly navigates dangerous waters by falling into tropes that are problematic. For example: it is through Terra that the super technological Fnrrians – as ubber advanced as they are in everything – first learn about stories, about creativity and about thinking outside the box. Never mind that this falls into the Humans Are Special trope. What bothers me the most about this is how this is under the false dichotomy that Science is intrinsically different to artistic pursuits and that the latter is about creativity that scientists lack – which is plain hogwash of course. Another thing that made me uncomfortable is the Terra’s Specialness as evidenced not only by how she brings something new and different and better to Fnrr, but also by how she Saves The Day while being White (of the blonde with blue eyes variety). I can’t help but to be reminded of the White Savior trope.

Ultimately there was enough heart here to make this an enjoyable read and definitely enough talent and interesting ideas to make me want to see where Mitch Benn goes next. Maybe to a place where no one has gone before?

Notable Quotes/ Parts: This is one of the best trailers ever. UK authors and actors read the brilliant first chapter of Terra:

Reading Next: Gossip From The Forest by Sara Maitland

Book Review: What Came From the Stars by Gary D. Schmidt