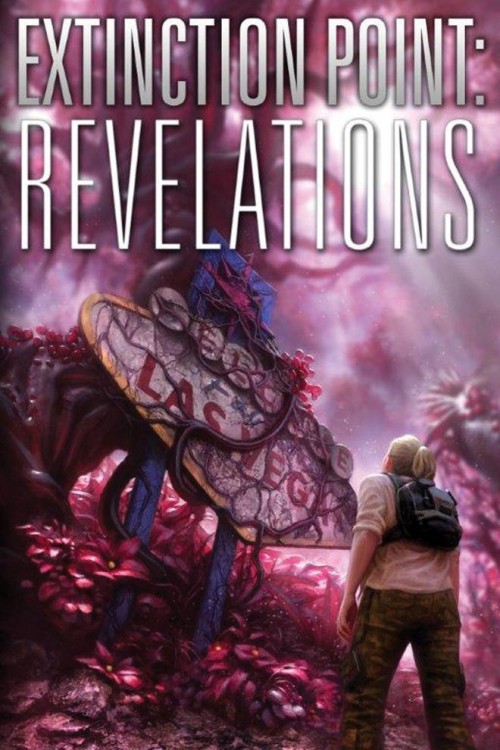 There is nowhere left to run. In the wake of the deadly plague that virtually annihilated the human race, a vast red jungle teeming with alien creatures and lethal plants is devouring Earth, swallowing buildings whole and ruthlessly decimating what life remains. A witness to the terrifying transformation, survivor Emily Baxter thinks the odds against humanity can’t get any worse. She is wrong. The thrilling conclusion to the bestselling Extinction Point series, Revelations takes a humanity on the brink of devastation . . . and throws it over the edge!

Stand alone or series: Book 3 in the Extinction Point trilogy

Why did I read this book: I’ve been a fan of this series since discovering it last year (see Extinction Point and Exodus), and I had to see how it would all end in this third and final book in the trilogy.

WARNING: This review contains mild, unavoidable spoilers for books 1 and 2 in the Extinction Point series. If you haven’t read Extinction Point or Exouds and do not wish to be spoiled, look away!

The world has ended in a torrent of red.

Emily Baxter has survived the red rain. She has biked across states and country borders, desperate to outrun the massive, planet-wide storm that threatens to obliterate all Earth-native life in its path.

With the help of her trusty satellite phone, and friendly voices from a scientist and an Earth-orbiting astronaut aboard the international space station, she has made it to the relative safety of an Arctic research station near the north pole – a place so cold and inhospitable to life that it is a sanctuary from the alien red plague that sweeps the planet. Along the way Emily has made friends, picking up a tween named Rhiannon and a malamute named Thor on her travels north. And, at long last, she is finally united with Jacob, the man behind the voice on the radio and the wheelchair-bound lone scientist survivor at the remote Arctic facility. Emily and her friends receive even more good news at the top of the world: they aren’t the planet’s only survivors. A British nuclear submarine, the HMS Vengeance and its surviving crew of 36 men arrives at the same research station, looking for help to tend to its wounded.

Emily and her newfound friends will weather the red storm, and look for answers as the next phase of this alien masterplan unfolds. Together, they must find a way to survive and carry on, if there’s to be any future for the human race.

Revelations, the third and final book in Paul Antony Jones’ Extinction Point trilogy, is aptly titled, for it is a book about revelations. The real origin of the red rain, the purpose of its arrival and destruction of the planet, and what these revelations mean for humanity – that is the big question that drives the series as a whole, and whose (not-so-shocking) answers are finally revealed in this third novel. And the answers… well, they are slightly unexpected (at least, they were for me). From the arrival of the red rain in Extinction Point and the subsequent changes it wrought on Earth’s life forms and environment pointed to the very obvious answer of “terraforming” (as motivation behind the transformation of Earth’s biosphere to a single utterly alien, ammonia-based ecosystem). Except, terraforming for colonization isn’t really the full answer in Revelations – and that’s a kinda cool twist.

Eponymous revelations aside, this closing volume isn’t merely about a big reveal at the end with an alien overseer (although that does happen). No, the reason why Revelations – and the series as a whole, really – works is because it’s a thorough record of Emily Baxter’s will to survive. In Extinction Point, we watch Emily inexplicably emerge as Manhattan’s sole survivor, and her desperate plans to escape her highrise apartment, gather supplies, and make contact with the only other people she knows to be alive. In Exodus, Emily’s daily journey as she bikes and then drives across the country in her mad scramble north is detailed at length, including the many monsters and hardships the lie in her way.

Revelations continues this same gritty, detailed picture of day-to-day survival, as Emily and her cohorts plan their next steps to find out the true extent of the storm and start (Earth) life anew in an utterly alien landscape. We see everything from the logistics of housing injured soldiers, to travel on submarine and black hawk helicopter, to the rigors of clearing out dangerous alien vegetation and reclaiming, at least in some small part, land free of this new version of life. In other words, like the books before it Revelations glories in the details of survival – which I kinda love, and what sets the Extinction Point books apart, in my mind, from the many other alien invasion and apocalyptic novels in current speculative fiction.

While I love the awesome granularity and forward-moving plot of these books, the downside to this narrow focus means that there’s less attention paid to actual character development, or any larger, more significant themes (about the nature of humanity and life itself, for example). There are no soul-searching questions about human nature, here; nor are there any hidden depths to the straightforward characters presented in this book. Emily is a tough survivor who has seen it all and emerges basically the same person she was going into her long trek – brave, patient, kind. Rhiannon is a charming and sweet kid (who is barely in this book), Jacob had potential to be interesting as the scientist with ulterior motives (but basically is reduced to insular drunk scientist, who is also largely off-screen for much of this book). We get a lot of time with the new sailors from the HMS Vengeance, who are all basically charming soldiers who go along with what their told by command with very little argument.[1. The only really irritating thing to me in this book is how frequently these sailors would refuse to believe or see the truth in front of their faces, e.g. The dog is acting weird, like he’s just sensed an alien? NAH, must be something else! or The space station reported 7 flashes of light, like vessels nearby? NAH, must be the aurora borealis or something!.] And OF COURSE one of those sailors is a charming, attractive guy that catches Emily’s eye. Of course.

It’s all a little… safe, when it comes to characterization, which is fine but I would have appreciated a little more complexity in this novel. Plus, I’m not crazy about the epilogue, which sits as a little too pat in this reader’s opinion.[2. On a spoiler-y side note, I get cranky when a female main character’s journey for survival and answers ends… with a wedding and a baby. FFS.]

That said, the focus of the book is the day-to-day of survival in an impossible, seemingly hopeless apocalypse. And if that’s your jam, Revelations has your name all over it (it certainly had my name all over it).

Emily Baxter stood at the frost-encrusted window and stared out at a distant horizon beyond the Stockton Islands rimed with thick, red clouds. The storm she and Rhiannon had fought so very hard to outrun had seemed, for a short while at least, to be intent on sweeping after the two women, folloing them to the safety they had fought so hard to reach. But the threatening clouds had slowed their steady march across the sky and finally stopped, far enough away from their island sanctuary that Emily felt able to relax, just a little; far enough away to begin to hope.

Check out the first chapter HERE.

Rating: 6 – Good, for this volume (it is the weakest of the three books), but 7 – Very Good for the trilogy overall

Book Review: What Came From the Stars by Gary D. Schmidt