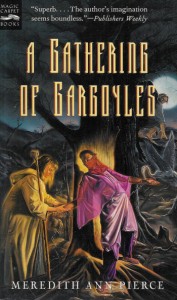 Title: A Gathering of Gargoyles

Aeriel’s love has broken the curse on the darkangel Irrylath, making him human again and freeing him from the control of his mother, the dreaded White Witch. But the Witch is far from defeated. Her wicked plans require all seven of her vampyre sons, and she will not give one up so easily. There is but a single hope for the Witch’s defeat–solving an ancient, mysterious riddle.

So Aeriel sets off to solve the riddle, sailing across a sea of dust and straight into the worst of the Witch’s terrors. But if Aeriel is to save Irrylath and her world, she will have to overcome his bloodthirsty darkangel brothers–and ultimately confront his terrifying mother face-to-face.

Stand alone or series: Book 2 of the Darkangel Trilogy

How did I get this book/Why did I read this book: Megan no h, one of the lovely gals behind Forever Young Adult, was kind enough to send me a copy of this book (AND a copy of the final book in the trilogy) when she saw how much I loved The Darkangel. I have been shamefully lazy in actually getting around to reading and reviewing the book – but here it is, at long last!

**WARNING: This review contains unavoidable spoilers for The Darkangel, book 1 in the series. If you have not read The Darkangel and would like to remain unspoiled, LOOK AWAY! You have been warned.**

After cutting out her own heart and giving it to the darkangel Irrylath, Aeriel has not only found a way to save her world from the clutches of the White Witch and her seven icari, but she has also found a way to save Irrylath’s soul. After breaking the curse on her new bridegroom, Aeriel and Irrylath make their way to Isternes, the childhood home of Irrylath, before he was treacherously traded away to the White Witch by his nursemaid Dirna for life and power. Here, Irrylath finds his true mother, his brothers, and his birthright as the eldest son and heir to the land – but though he and Aeriel are welcomed with open arms by his Esternese kin, their struggles remain.

Irrylath remains plagued by terrible dreams and withdraws from Aeriel’s touch and compassion – and Aeriel learns that her husband, in name if not in truth, still is snared by the hook of the White Witch. If she is to save him – and to truly save her world from the Witch, who even now searches for a new babe to make into a darkangel – Aeriel must embark on a dangerous quest, and solve an ancient, hidden riddle.

A Gathering of Gargoyles continues the story of a brave young woman named Aeriel, who has inexplicably become the one person that can stand against an evil that threatens to consumer her world. And, dear readers, I loved this book so very much. I must start this review properly by thanking the lovely Megan no h for her emphatic recommendation, because A Gathering of Gargoyles is truly and utterly awesome. It is in fact a better novel than The Darkangel; The Empire Strikes Back to the first novel’s Star Wars. I know that science fiction analogy may seem at first blush NOT to make sense with this trilogy, but in actuality it has far more resonance than one might suspect – because A Gathering of Gargoyles makes it abundantly clear that this series is actually one rooted in science fiction. Aeriel’s world, as it becomes known in A Gathering of Gargoyles, is actually our moon; a “daymonth” to Aeriel and her fellow creatures, is the equivalent to a lunar day, with the constant companion of the Earth, or “Oceanus” to Aeriel, shining its pale blue light upon the moon’s surface. Unlike our current moon, though, Aeriel’s world is a place of impossible, fantastical life – in which there are seas of dust hiding moonwhales and serpents, with deserts and forests, gargoyles and lons.

This is the most impressive thing about this trilogy, and A Gathering of Gargoyles in particular – the incredible scope of imagination. To be sure, this is a fantasy novel with magical creatures and gifts, but the story never once feels tired or familiar because of the magic of Ms. Pierce’s prose and the wildly imaginative setting. Reading A Gathering of Gargoyles is almost like being in a dream – things are strange and ever-shifting, but you never really feel confused or lost, because it is your dream, and impossible things are accepted as a matter of course.

From a pure story perspective, the actual plot of the novel is fairly simple – Aeriel leaves Isternes to find the lost lons, so that Irrylath’s brothers can ride them into battle against the White Witch – and her journey takes her to the edges of the world. In truth, the story is about Aeriel as she discovers who she is, what she is truly capable of, and how far she will go to stop the Witch and win Irrylath’s heart. The riddle – actually more of a prophecy – that sparks her journey lies at the heart of the book, and I love that its meaning changes as Aeriel’s self-awareness grows.

For all that she is risking everything for Irrylath, this is truly Aeriel’s story, and I loved every last second of it. I loved following Aeriel from Isternes, across the Sea-of-Dust, to singing for her sup and on the run from bandits, to the desperate land of Pirs and the terrible truth of its ruler, to eventually back in her own home of Terrain. On each leg of her far journey, Aeriel learns a new truth, gathering Irrylath’s former gargoyle guards along the way. My main complaint for The Darkangel was Aeriel’s lack of oomph, and her utter, unflinching goodness. While she is still unerringly moral and good in A Gathering of Gargoyles, this book shows us glimpses of her vulnerability. She falls for the tricks of a false king and a hag; she shows her frustration when all her work seems to have gone to waste. And, most touchingly, we feel her heart breaking as she realizes the truth of Irrylath and that he does not love her.

This volume ends on a sweet note, with the promise of even more fantastic adventure and peril ahead – the trilogy must close with Aeriel and Irrylath’s confrontation of the White Witch, and I cannot wait to find out how it all ends.

If you haven’t read this gem of a series before, I implore you to find a used copy and start. Absolutely, wholeheartedly recommended, and one of my most cherished finds of the year.

Aeriel’s craft sped over the Sea-of-Dust, riding the swells that rolled like water and glowed by starlight with their own internal fire. Beneath the surface, Aeriel saw the silt-fine particles constantly shifting. Wind stole a few from the crests of the waves, whirling them off in dust devils against the dark, starry sky.

So fine were the grains that Aeriel could scarcely see them, hardly felt them when she breathed, aware at first only of their faint, tangy aroma. Before many hours, though, she found her throat growing dry. Her eyes felt grainy, her fingers paper-leathery.

Tying the sail and tiller into place, she drew out from her provisions a loongrass bulb and bit through the white, parchmentlike skin. The meat inside was stiff, the juice astringent but satisfying. She needed only a few bites before the feeling of dryness eased.

The colors of the Sea were changing now. Close in to shore, the dust had been greyish, almost buff-colored. But as she sailed farther, deeper to sea, the dust grew paler, clear yellow green, and later violet. Sometimes the waves rolled mauve.

Stars turned. Night drifted by. Oceanus peered over the rim of the world, and Aeriel’s heart lifted, soared. The air was showered in its ghost-blue light. Gradually, the planet rose.

Reading Next: Seraphina by Rachel Hartman