Lila, Kell and Rhy are back in this second book–and, oh dear readers, IT IS GOOD.

Title: A Gathering of Shadows 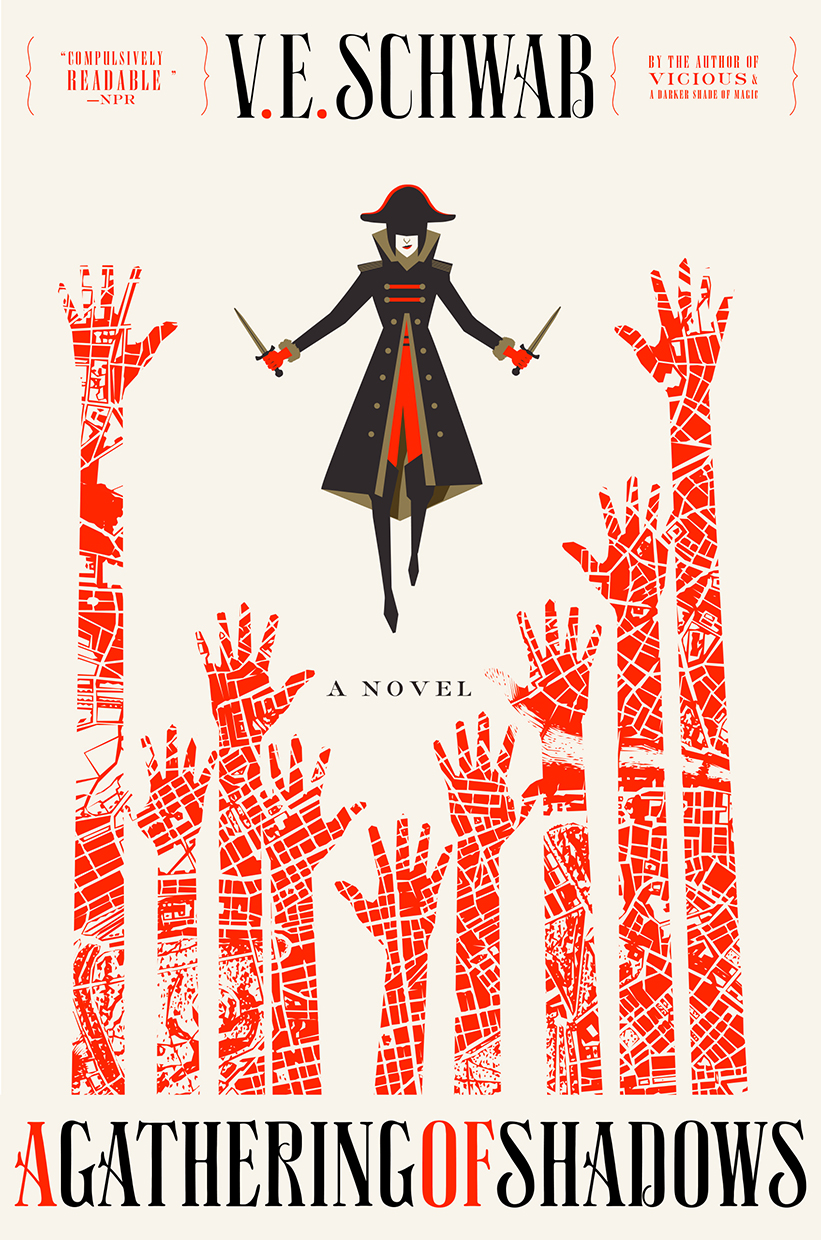 Four months have passed since the shadow stone fell into Kell’s possession. Four months since his path crossed with Delilah Bard. Four months since Rhy was wounded and the Dane twins fell, and the stone was cast with Holland’s dying body through the rift, and into Black London.

In many ways, things have almost returned to normal, though Rhy is more sober, and Kell is now plagued by his guilt. Restless, and having given up smuggling, Kell is visited by dreams of ominous magical events, waking only to think of Lila, who disappeared from the docks like she always meant to do. As Red London finalizes preparations for the Element Games—an extravagant international competition of magic, meant to entertain and keep healthy the ties between neighboring countries—a certain pirate ship draws closer, carrying old friends back into port.

But while Red London is caught up in the pageantry and thrills of the Games, another London is coming back to life, and those who were thought to be forever gone have returned. After all, a shadow that was gone in the night reappears in the morning, and so it seems Black London has risen again—meaning that another London must fall.

Stand alone or series: Book 2 in the Shades of Magic Trilogy

**WARNING: This review contains unavoidable spoilers for A Darker Shade of Magic. If you have not read book 1 and wish to remain unspoiled, LOOK AWAY.**

“Everyone’s immortal until they’re not.”

It has been months since Kell and Rhy have had their fates and life-forces inextricably intertwined. The throne of the magic-shrouded White London has fallen along with the cruel hegemony of the Dane twins; the singular Lila Bard has fled her drab life of thievery in Gray London and traded up for a life of a pirate thief on the high seas of Red London.

With the danger behind them, the monarchs of Red London–with Rhy at the helm–throw themselves into preparations for the Essen Tasch–the Element Games, an elaborate and much-loved competition of the best magicians from all over the world. With the distraction of the Games, Rhy throws himself into extravagant decoration and spectacle just as he tries to make amends with his brother. For Kell, the Games mean a possible outlet from the constant stress of his magical bond with Rhy. For Lila, the Games mean she gets to watch the extraordinary unfold before her eyes; they also mean the chance to see Kell once again.

But all is not well in all the realms–something has changed.

Kell witnesses it, when he visits Gray London for the first time in months to deliver a letter to the new King, and sees the impossibility of magic in the deadened world of steam and gears.

Lila feels it, when she whispers her own spells and makes her own magic conjured of thin air.

Rhy feels it with every stolen breath he takes, with every shared emotion, nightmare, and pain with Kell.

Black London is awakening. And everything will change.

Last year, Ana and I read and reviewed A Darker Shade of Magic–and we both unabashedly loved it. (In fact, it made my list of top 10 books of 2015.) I loved this book for many reasons, but mostly because of the characters (LILA FOREVER XXXX), the worldbuilding, the intricate distribution of power and rules of magic, and–lest we not forget–the bloody, vicious action.

As such, A Gathering of Shadows was one of my most highly-anticipated books of 2016.

That kind of expectation is always hard to live up to, and I was slightly worried that this second book would not be able to live up to the… well, magic of the first.

Oh, but it DID, dear readers. It really, truly did.

In other words: I loved A Gathering of Shadows very, very much. (In a word: ALUCARD!)

Starting with the most obvious place, I loved the characters who comprise this impressive, awesome middle novel. Just as in the first book, we meet and are intricately connected with our three main characters–the super emo Kell (who is even more tortured this time around on account of being tied to his brother’s emotions, pains, and pleasures), the razor-sharp wit and hunger of Delilah Bard, and the surprisingly older and calmer Rhy. I loved the growth and development of each character here, particularly how certain pairs of characters play off against each other. The dynamic between Kell and Rhy, now that they are intimately aware of exactly what the other is thinking and feeling at all times, is incredibly intense and fraught.

Worse, more than just emotion, Rhy and Kell share a lifeforce–“Rhy held Kell’s pain in his hands, while Kell held Rhy’s life in his”–which makes things ever-more tricky. The relationship between these brothers, which was already so moving in book 1 is even more nuanced and powerful in this second book. It’s always harder to work it out with someone you love, isn’t it? Kell and Rhy love each other very much, even if they’re not the best at discussing those emotions–but the care they show each other, the frustration they feel, it’s really truly poignant.

This, of course, brings me to my favorite part of this book: Lila and Alucard.

“She bent most of the rules. She broke the rest.”

Delilah Bard is one of my favorite characters right now, period. She sharp-witted and voracious for adventure; she cannot be tamed or controlled or held; she years for power and for answers and for everything the world–all the worlds–have to offer. She is, in a word, hungry.

A Gathering of Shadows opens with Lila and pirates and explores what she has been doing over the past few months–it is unexpected and exhilirating and PERFECT in every way. As Lila grows in her skill and knowledge, as she figures out her new place in the world and at sea, she crosses paths with one Captain Alucard Emery.

And, people, it is electric. Both Alucard and Lila carry their secrets, and when their ship pulls into Red London’s docks for the captain to participate in the Games, their path collides with Kell and Rhy’s.

“No,” he muttered, running a hand through his copper hair. “No. No. There are dozens.”

“Kell?” she asked, moving to touch his arm.

He shook her off. “Dozens of ships, Lila! And you had to climb aboard his.”

“I’m sorry,” she shot back, bristling, “I was under the impression that I was free to do as I pleased.”

“To be fair,” added Alucard, “I think she was planning to steal it and slit my throat.”

“Then why didn’t you?” snarled Kell, spinning on her. “You’re always so eager to slash and stab, why couldn’t you have stabbed him?”

Ok, maybe that’s a little spoil-y. BUT MY HEART. Just get ready for it, friends.

Beyond the characters, whom I dearly love, the real reason why A Gathering of Shadows sings is because of its intricate plotting, and the overall progression of the series. This second novel focuses on the centerpiece of the Essen Tasch–a kind of Triwizard-Tournament-meets-Gladiator-meets-The-Empress-Game–which is every bit as fun as it sounds. More than just fun, the focal point of the Essen means that we are itnroduced to a whole new scope of magic in this book as Red London begins to take form.

And then there are the other worlds, which must inevitably also come into play. Gray London, Red London, White London, and the subversive Black London–which isn’t quite as closed and dead as everyone would hope. The rules are changing, and watching the evolution of those rules over the course of this book and series is absolutely fascinating. (I am loathe to spoil you, so I won’t say anything else.)

What else can I say about the wonder that is A Gathering of Shadows? I loved it, very, very much. I cannot believe I have to wait a whole year for the next book–I don’t quite know how I’ll manage.

One thing I do know for sure, is that this book is fantastic and in the running for one of my favorite books of 2016. V.E. Schwab has done it again.

I’ll leave you with one last quote, one of my favorites, because this book is so incredibly quoteable:

“To the Essen Tasch.”

“Wouldn’t it be amazing,” murmured Rhy later, when the bottle was empty, “if we got away with it?”

Delilah Bard had a way of finding trouble.

She’d always thought it was better than letting trouble find her, but floating in the ocean in a two-person skiff with no oars, no view of land, and no real resources save the ropes binding her wrists, she was beginning to reconsider.

The night was moonless overhead, the sea and sky mirroring the starry darkness to every side; only the ripple of water beneath the rocking boat marked the difference between up and down. That infinite reflection usually made Lila feel like she was perched at the center of the universe.

Tonight, adrift, it made her want to scream.

Instead, she squinted at the twinkle of lights in the distance, the reddish hue alone setting the craft’s lanterns apart from the starlight. And she watched as the ship—her ship—moved slowly but decidedly away.

Panic crawled its way up her throat, but she held her ground.

I am Delilah Bard, she thought, as the ropes cut into her skin. I am a thief and a pirate and a traveler. I have set foot in three different worlds, and lived. I have shed the blood of royals and held magic in my hands. And a ship full of men cannot do what I can. I don’t need any of you.

I am one of a damned kind.