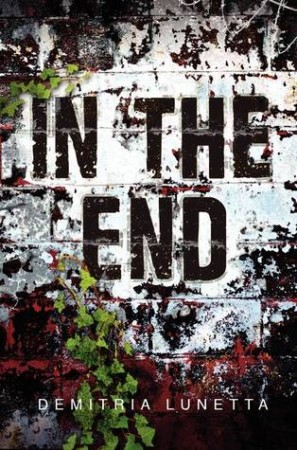 Title: In the End

The thrilling conclusion to In the After, the survival story of Amy and Baby, set in a near future where Earth has been overrun by vicious, predatory creatures.

It’s been three months since Amy escaped New Hope, and she’s been surviving on her own, like she did in the After. Until one day, her former fellow Guardian’s voice rings out in her earpiece. And in a desperate tone, Kay utters the four words Amy had hoped she would never hear: Dr. Reynolds has Baby.

Now it’s a race against time, for Baby is in imminent danger, her life threatened by the malevolent doctor who had helped start the end of the world. In order to save Baby, Amy must make her way to Fort Black, a prison-turned-survivor-colony, where she will need to find Ken, Kay’s brother. He alone holds the key to Baby’s survival.

One small slip-up on this quest could spark a downward spiral that would not only cost Baby and Amy their lives, but threaten the very survival of the people in the After.

Stand alone or series: Book 2 in the “In the After” duology

Why did I read this book: I thoroughly enjoyed and was pleasantly surprised by In the After, book 1 in this duology. Naturally, I was extremely excited for book 2 and bought it as soon as it came out last month!

**WARNING: This review contains unavoidable spoilers for In the After. If you have not read book 1 and want to remain unspoiled, look away!**

The world has ended in a flurry of teeth and blood. After an experimental virus escapes from a governmental test facility, humankind has changed and civilization has ended. Seventeen-year-old Amy has adapted and survived the onslaught of the ravenous florae, learning how to be completely soundless and to scavenge the ruins of civilization with the help of her surrogate younger sister, Baby. All of that changes, though, when Amy and Baby discover that there are other survivors out there and are whisked away to the protected colony of New Hope. All isn’t as pleasant as the doctors and scientists of New Hope make it out to seem, though – especially when the leaders of the colony learn that Baby is an original test subject, and the only known person immune to the florae infection.

Soon, the girls are separated, and a desperate Amy makes a last ditch effort to save her sister by leaving New Hope for the only other human encampment: Fort Black. Here, Amy hopes to find help from another doctor, who can save Baby from experimentation and death – and quite possibly save the human race at the same time. But Fort Black, a prison turned human colony, isn’t a safe or easy place – it will take all of Amy’s bravery and wit to save her sister and survive.

Well. Last week, I talked about breaking my rough streak with closing volumes in ongoing series’ – unfortunately, In the End numbers among the bad ones. The second and final book in the In the After duology, In the End had a lot of potential. I loved Demitria Lunetta’s first novel, chronicling civilization’s rapid decline to insatiable, hyperviolent, speedy creatures called florae – and the big reveal that the florae aren’t actually invading aliens, but transformed and infected humans. The bond between Amy and her surrogate sister Baby was at the heart of that book, and clearly drove not only the character arcs, but the plot for that novel. I’m sad to say that in comparison, In the End drops these most compelling angles of the preceeding novel and instead sticks to rote, paint-by-numbers bad YA dystopian fare. There’s the introduction of a love triangle, no focus on the sisterhood between Amy and Baby, compounded by an excessively uneven story and a basic plot that is predictable at best and nonsensical at worst. Suffice it to say, I wasn’t much impressed with In the End.

The biggest gripe I have with this particular novel is how manufactured it reads and feels. At face level, the introduction of a new human colony set in a prison, versus a different (but equally terrible) colony set in an idyllic neighborhood setup feels entirely derivative of The Walking Dead‘s Prison v. Woodbury setting circa season 3. Not that this is an inherently bad thing, but In the End basically hits every stereotypical trope one could imagine in a post-apocalyptic landscape. In the prison colony of Fort Black (portentous name, amiright?), women are property that belong to their protector men, there are publicized mortal combat death matches (for morale), rape, violence, and other appalling living conditions abound. Compounding this rather unimaginative setup is the problem that Amy, our heroine, does very little to challenge the status quo. Instead, other than a solitary tepid outburst (that doesn’t actually challenge or change anything), Amy kind of rolls with being someone’s property because she very luckily runs into a hot, tortured, sensitive artist type who NEEDS TO PROTECT HER. Because he’s failed protecting the innocent females before. And he’s super tortured and deep because of it. Of course, Amy finds her emotions torn between this new guy, Jacks, and her former flame back at New Hope, Rice.

To be fair, In the End and particularly its treatment of female characters isn’t ALL bad. I did love the introduction of new (lesbian) character Brenna, and that she provides a counterpoint to all of the other women of Fort Black who willingly go along with their dude protectors (including but not limited to the former attorney who falls in love with one of her former guilty clients and literally refuses to live without him).

Unfortunately, the issues with In the End are not limited to disenfranchisement of female characters or love triangles; there’s also an irritating lack of follow-through/common sense to Amy’s motivations, and a strangely uneven plot. The first part of the book – detailing Amy’s arrival at Fort Black and her half-hearted attempts to find Ken, who can then make his way back to New Hope and hopefully save Baby for his own testing purposes (for real, this is the logical thought process) – drags on unnecessarily. In contrast, Part 2 and especially Part 3 are incredibly rushed – by the time we get to the climactic showdown, it’s actually comical. (Spoiler: there is BRAINWASHING, too.)

It reads, in all honesty, like a first draft that needs some drastic tightening up. In short: I was not a big fan. Ultimately, In the End was yet another disappointing end to a formerly promising series. I still highly recommend In the After, but would steer clear of this second book.

Notable Quotes/Parts: You can read an excerpt by using the widget below: