This Thanksgiving weekend, we gear up for Star Wars: The Force Awakens–Thea starts off her long weekend with a review of this fun trade that starts just after the events of The Return of the Jedi… 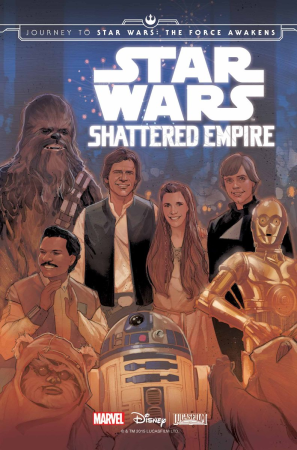 For the first time in the new Star Wars canon, journey with us into the time after the end of Star Wars Episode VI Return of the Jedi!

Writer Greg Rucka (PUNISHER, WOLVERINE, Gotham Central) and artist Marco Checchetto (AVENGERS WORLD, PUNISHER) take us past the destruction of the second Death Star — and into the chaos of a Shattered Empire. It’s the explosive lead-in to this winter’s blockbuster big-screen Star Wars revival, and everything you need to know is right here!

Stand alone or series: Standalone miniseries (although it is meant to bridge the gap between Episodes VI and VII)

The Emperor is dead. Darth Vader is redeemed. The Death Star is just about to blow, and the Rebellion is poised on the edge of its greatest, definitive victory.

Enter Lieutent Shara Bey, Rebel fighter pilot, wife, and mother. As X-Wings attack the new Death Star’s main generators, Shara and her team focus on distracting the firefight–so she’s in the perfect place at the perfect time to give Commander Luke Skywalker some cover as he makes his escape from the about-to-explode Death Star. With the Empire defeated, Shara thinks, everything should be simple. She has time to find her husband, Sergeant Kes Dameron–a soldier in General Han Solo’s Pathfinders special forces team (charged with destroying the Death Star’s deflector shield generator)–and to get some much needed R&R.

Of course, no one told the Empire that they lost. And things aren’t so easy or as happy as they seem.

Shattered Empire follows Lt. Shara Bey on four missions–the destruction of Death Star II and celebration on Endor, a mission with the Pathfinders (including Han and Chewie), a calamitous trip to Naboo with Leia, and one last covert ops run with Luke.

The Empire might be shattered, but it’s certainly not done–this miniseries from Greg Rucka makes that abundantly clear.

Purporting to bridge the gap between Return of the Jedi and setting the stage for certain elements leading up to The Force Awakens, Shattered Empire is an entertaining–if somewhat mediocre overall–addition to the Star Wars universe. 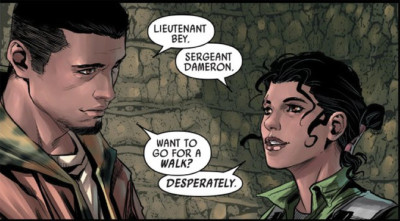 So let’s focus on the good stuff, shall we? The miniseries focuses tightly on a new character to the Star Wars Universe, one Lieutenant Shara Bey, and the internal struggle she has as she grapples with her desire to do her duty for the Rebel Cause, and the values for which she’s fighting (namely, peace, happiness, and family). As a new character, Shara is an awesome choice for protagonist–her struggle and the larger issues she faces are emblematic of the larger questions of war within this far, far away galaxy. We never actually see Poe Dameron in this book, but we do know that Shara and Kes are his parents–and that should provide us with some framework for the new fighter pilot. 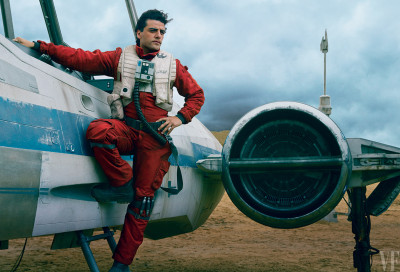 That’s not really the draw, though. My favorite parts of the book follow Shara and her interactions with Leia and with Luke, respectively (sorry, Han and Chewie). In particular, issue #3 is awesome–where Shara is playing pilot to Leia on a diplomatic mission to Naboo. On said mission, we see that Emperor Palpatine might be dead, but his legacy and secret missions live on. We also see the elected Queen of Naboo, Leia, and Shara involved in some serious business as they band together to save Naboo from the Emperor’s posthumous gambit to destroy his home planet. (It involves these ladies getting into the last three fighters–those aquiline yellow-and-chrome beauties, you’ll remember from the prequel era–and trying to blow up some satellites before the planet is annihilated by atmosphere-scrambling imperial tech. PLUS, bonus scene with Lando.) This is particularly cool, because we see the devotion to the republic on the part of both Leia and the Naboo Queen, we also see the toll that Alderaan’s annihilation (and the many continued losses of life) take on Leia as a leader.

In issue #4, we see Shara enlisted by R2D2 and Luke on a mission to save an important relic that the Emperor hid–and the legacy of the Jedi continue with Shara and her family. Both of these issues build on the characters we know and love from the original trilogy, have nice visual and stylistic queues from the prequel era–including an awesome Leia force moment, when she senses the legacy of Darth Maul (!!!)–and really nicely plant the seeds (pun intended) for what I hope will be fruitful branches of story in The Force Awakens. 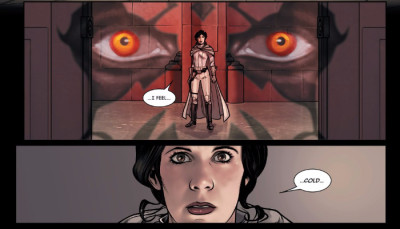 However. On the negative side, Shattered Empire is, essentially, a kind of mediocre post-Jedi storyline that serves as an extended commercial/hype up spot for Episode VII. The new characters Shara and Kes aren’t exceptionally well-developed; Shara in particular could have used a little more solo-time for depth and reflection to really bring those intriguing internal themes of family and duty to full-force. (Kes is barely in the comic at all.)

Still… as someone who is fully drinking all the Star Wars kool-aid and eagerly awaiting The Force Awakens, Shattered Empire does what it needs to do. The little tantalizing glimpses we see of Luke, Leia and company are awesome and worth the sticker price (at least they are to this reader).

Middle Grade Review Bonanza: The Wolves of Willoughby Chase by Joan Aiken, Permanent Rose by Hilary McKay, and From the Mixed-Up Files of Mrs. Basil E. Frankweiler by E.L. Konigsburg