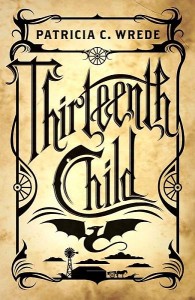 Eff was born a thirteenth child. Her twin brother, Lan, is the seventh son of a seventh son. This means he’s supposed to possess amazing talent — and she’s supposed to bring only bad things to her family and her town. Undeterred, her family moves to the frontier, where her father will be a professor of magic at a school perilously close to the magical divide that separates settlers from the beasts of the wild.

With wit and wonder, Patricia Wrede creates an alternate history of westward expansion that will delight fans of both J. K. Rowling and Laura Ingalls Wilder.

Standalone or series: Book 1 in a planned series (duology?)

Why did I read this book: Patricia C. Wrede is one of my childhood favorite authors – I ADORE her Enchanted Forest/Dragons series, and didn’t realize until recently that she was still writing books (shame on me, I know)! When I saw Thirteenth Child at The Strand, and learned that its sequel would be published later this year, I couldn’t resist.

Francine, more commonly known as Eff, is the twin of Lan, a double seven – the seventh son of a seventh son, and therefore an immensely powerful magician, of whom many great deeds and undertakings are expected. While Eff is the twin of a powerful brother, she also happens to be a thirteenth child, and therefore a curse and magical blight on all those around her, or so superstition says. Ever since her birth, Eff has had to deal with a large, extended family that reviles her and sees her as evil, while in the next breath, those same aunts, uncles and cousins praise Lan to the high heavens. Not that Eff is jealous of her twin, but it does make her a serious, introverted, and terrified little girl. When her Uncle tries to have Eff arrested – at the ripe age of four – her parents finally have had enough, and decide to move Eff, Lan, and the rest of their children away from the poisonous attitude of their relatives.

Eff and her family soon discover that life out west is different than life in the city. There’s the threat of dangerous creatures, like steam dragons and carnivorous grubs, that could break through magical wards. There’s also a different sort of people attracted to the wild frontier, from magicians of other schools of thought, to rationalists that shun magic altogether. As Eff grows up, she struggles with the knowledge and deep-seated fear of her (supposedly) inevitable evil as a thirteenth child, as she does with her relationship with her family. Though Eff tries to suppress her magical abilities, it is clear that she is not without her own magical strength, and when the time comes for her to use her power, she must find a way to let go of her fear, and become the magician she is capable of becoming.

Patricia C. Wrede is an author that is close to my heart. I fell in love with Princess Cimorene when I was in fourth grade, and it has been with great joy and relish that I have discovered her other titles this year. Thus, when I saw Thirteenth Child in my local bookstore, I was ecstatic – and this smuggler is happy to report that once again, Ms. Wrede delivers. Thirteenth Child is a lovely coming-of-age tale, full of magic and wonderful characters against an intriguing western frontier-type backdrop.

Easily, the biggest draw of this book lies with its heroine, Eff. The trauma of being a thirteenth child – especially when juxtaposed with her luck-blessed double seven twin brother – is so firmly ingrained in Eff’s psyche, that it shapes her perception of herself and the world. This means that Eff is an incredibly unreliable narrator, always second guessing herself, always terrified of any magical ability that manifests because she thinks it’s a sign that she is turning evil. Despite these fears (or maybe because of them), Eff is an endearing character – unlike her gifted twin, Eff takes everything seriously and assumes responsibility for anything that might go wrong. Also, I must admit, it’s kinda cool to see a story narrated by a character that isn’t all-powerful, but willfully hated because of her birth order. At the same time, I also appreciated Eff’s siblings and parents for their own textures and flaws – from Eff’s selfish elder sister Rennie, to the precocious (but underneath the cockiness, good-hearted) Lan.

Of course, the setting and worldbuilding is fascinating, too. I loved the types of magic in Thirteenth Child, which blends western European (“Avrupan”) magic, with African (“Aphrikan”), with a blend of Hispanic/Asian magic (“Hijero-Cathayan”) – each of the different magics adhere to different rules, and different interpretations. And the coolest thing? None of these systems are any better or more true than the others – they all work in different ways, with different advantages and drawbacks. I did like this reimagining of America (or “Columbia”) – but I do have one quibble that I can’t quite shake. In this reimagining of the colonies, there are no Native Americans…and I have to wonder why that is? I can’t help but think that this is an easy way around the moral dilemma of colonization (just as the legacy of slavery has been erased). I wonder if this will be addressed at all in the next book. I certainly hope so.

The only other factor that bothered me with Thirteenth Child was how quickly Eff and her friends and siblings grew up – the book starts with Eff as a very young girl, and ends with her at age eighteen (many of the years in between glossed over, narratively). I kind of wish that her story was broken out across more books, as opposed to skipping so many of her teenage years all at once.

These concerns aside, I truly enjoyed Thirteenth Child, for its characters and its fantastical, revisionist take on history, and I eagerly await the release of Across the Great Barrier later this year.

Everybody knows that a seventh son is lucky. Things come a little easier to him, all his life long: love and money and fine weather and the unexpected turn that brings good fortune from bad circumstances. A lot of seventh sons go for magicians, because if there’s one sort of work where luck is more useful than any other, it’s making magic.

And everybody knows that the seventh son of a seventh son is a natural-born magician. A double-seven doesn’t even need schooling to start working spells, though the magic comes on faster and safer if he gets some. When he’s grown and come into his power for true and all, he can even do the Major Spells on his own, the ones that can call up a storm or quiet one, move the earth or still it, anger the ocean or calm it to glassy smoothness. People are real nice to a double-seventh son.

Nobody seems to think much about all the other sons, or the daughters. There’s nearly always daughters, because hardly anybody has seven sons right in a row, boom, like that. Sometimes there are so many daughters that people give up trying for seven sons. After all, there’s plenty enough work in raising eleven or twelve childings, and a thirteenth child — son or daughter — is unlucky. So everybody says.

Papa and Mama didn’t pay much attention to what everybody says, I guess, because there are fourteen of us. Lan is the youngest, a double-seven, and he’s half the reason we moved away from Helvan Shores when I was five. The other half of the reason was me.

Additional Thoughts: Here’s the synopsis and cover for book 2 – very different looking, no? 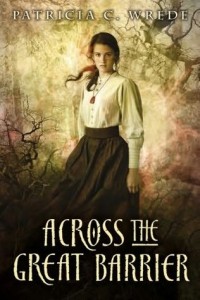 From New York Times #1 bestselling author Patricia C. Wrede, the second in the series of magic on the western frontier.

Eff is an unlucky thirteenth child – her twin brother, Lan, is a powerful seventh son of a seventh son. And yet, Eff is the one who saved the day for the settlements west of the Great Barrier. Her unique ways of doing magic and seeing the world, and her fascination with the magical creatures and land in the Great Plains push Eff to work toward joining an expedition heading west. But things are changing on the frontier.

There are new professors of magic for Eff and Lan to learn to work with. There’s tension between William and his father. And there are new threats on the frontier and at home. To help, Eff must travel beyond the Barrier, and come to terms with her magical abilities–and those of her brother, to stop the newest threat encroaching on the settlers.

With wit, magic, and a touch of good pioneer sense, Patricia C. Wrede weaves a fantastic tale of the very wild west.

Rating: 7 – Very Good, with potential for so much more awesomeness in the next book

Reading Next: The Desert of Souls by Howard Andrew Jones