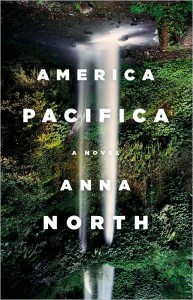 Eighteen-year-old Darcy lives on the island of America Pacifica—one of the last places on earth that is still habitable, after North America has succumbed to a second ice age. Education, food, and basic means of survival are the province of a chosen few, while the majority of the island residents must struggle to stay alive. The rich live in “Manhattanville” mansions made from the last pieces of wood and stone, while the poor cower in the shantytown slums of “Hell City” and “Little Los Angeles,” places built out of heaped up trash that is slowly crumbling into the sea. The island is ruled by a mysterious dictator named Tyson, whose regime is plagued by charges of corruption and conspiracy.

But to Darcy, America Pacifica is simply home—the only one she’s ever known. In spite of their poverty she lives contentedly with her mother, who works as a pearl diver. It’s only when her mother doesn’t come home one night that Darcy begins to learn about her past as a former “Mainlander,” and her mother’s role in the flight from frozen California to America Pacifica. Darcy embarks on a quest to find her mother, navigating the dark underbelly of the island, learning along the way the disturbing truth of Pacifica’s early history, the far-reaching influence of its egomaniacal leader, and the possible plot to murder some of the island’s first inhabitants—including her mother.

Why did I read this book: If you haven’t noticed, I’ve got a thing for dark and deeply depressing futures. When I saw America Pacifica floating around in review land, I immediately developed The Greed. Shortly after The Greed took over, the publisher contacted us with a review copy and I was ecstatic (and The Greed subsided…for now).

In a world that has succumbed to extreme climate change, North America has been rendered a frostbitten wasteland, locked in a second ice age. In the midst of this frozen disaster, however, a few thousand refugees have left the mainland in a mass-boat exodus to a volcanic island, christened America Pacifica in memoriam for the world left behind. Building it out with landfills, using technology to convert salt water to solvent, and feasting on artificially flavored jellyfish, America Pacifica is one of the world’s last outposts. Eighteen year-old Darcy has lived on the island her whole life with her mother, in the shanties that make up Little Los Angeles. One day Darcy’s insulated world is cast asunder when a strange woman approaches her mother, and the next day Sarah disappears from work, never to return home again. For Darcy, Sarah was her entire world and she will stop at nothing to discover the truth of her mother’s disappearance. As Darcy prowls America Pacifica’s dark underbelly and delves deeper into her mother’s secrets, however, she learns more about Sarah’s role in the founding of America Pacifica, and the island’s ugly past, and future.

The first thing I should preface my review with, and put up in blazing boldface capital letters, is: THIS IS NOT A YOUNG ADULT NOVEL. Seriously. It’s not. it’s also not your typical YA “dystopian” romantically inclined drivel. Don’t go into this book thinking that it is, because you’re not gonna be a happy camper. I’m going to go off on a little bit of a digression here, so bear with me. I think one of the *key* differences is said best by one of the characters in the book:

Sometimes someone would try to unite us, get us to share our food or sleep in shifts so we’d have enough blankets. Those people would always fail – once, twenty kids beat a woman to death for suggesting we cut our vitamins in half. They failed because they tried to appeal to the goodness in us, and that goodness was all frozen out. But Tyson knew how to find the bad in people and use it for good.

Last year at Book Expo America, Ana and I had the mixed pleasure of listening to some authors (mostly YA) talk about their take on “dystopias” – which sparked some interesting dissension. According to one (now-famous) dystopian YA author, dystopias are essentially bad situations but there has to be some light at the end of the tunnel. On the other end of the spectrum, the adult-audience author (interestingly, also the only male author) on the panel disagreed, saying that there need not be any such hope. The bleaker the better, and dammit all to hell with the rest.

Having been an apocalyptic and dystopian fiction fan for many years and having reviewed quite a number of these subgenre titles on this blog, I don’t think either one of these authors was right or wrong – there are countless combinations and flavors of the dystopic. But, having read quite a few so-called dystopian YA titles in the past year or so since the genre has exploded in one big Hunger Games-fueled world of homogeneous blandness, I will say that the thing that seems to separate the big boys from the drivel is that the truly awesome dystopian novels tend to be the ones that are bleaker, grittier, and realer. Have you ever noticed when you’re reading a YA title like, say, Matched or Across the Universe or Delirium that there is never any real worry that your beautiful, intelligent, fair-minded protagonists will fail? That there’s never any question of whether or not their rebellions against the EEEEVIL OVERLORDS (because of course The Powers That Be are ALWAYS single-mindedly EEEEVIL) will ever go awry? That their ridiculously idealistic hopes for peace and freedom and emotion will ever be thwarted by pragmatism?[1. Note, these protagonists all manage to save the world AND get the boy of their dreams – AT THE SAME TIME! That’s some fan-freaking-tastic multitasking, right there, ain’t it?]

No. Because these so-called dystopias are nice and pretty and sanitized; they are happily, blissfully formulaic and lack teeth. I’m not saying all YA dystopias are like this – certainly, many of my personal favorites in the dystopian/apocalyptic canon are YA titles (see the exultant adoration I have for Patrick Ness, Michael Grant, Susan Beth Pfeffer, etc). But what these novels share with books like America Pacifica, with Orwell or even McCarthy, is the fact that there is no guarantee with these novels. You don’t know that a character will prevail, or live happily ever after with their man/lady-love, or even survive. I loved that tension in this book, and it is one of the things that salvaged some of the unevenness with regards to writing and storytelling.

Mini-rant said, allow me to elaborate on America Pacifica itself as a novel. As I said above, I love that the book is unforgivingly harsh, reveling in the shit and stink of America Pacifica, the sizzle of entirely jellyfish based foods and synthetic nutrients, the addiction of solvent and inequity of its citizens.[2. On the jellyfish note – it’s really cool to see an author that does a little research. Did you know that jellyfish are one of the few species that thrive from overfishing and climate change? With global warming, jellyfish can expand their tentacled reach into parts of the ocean that were formerly uninhabitable for them, and the lower number of fish means that there is so much less competition. Hence, those huge Finding Nemo-esque Jellyfish Blooms. In fact, if things continue the way they are at this rate, we could very easily live in a world where the only real seafood left for humans to eat will be jellyfish.] America Pacifica is an ugly, hard place to live, a bit reminiscent of Paolo Bacigalupi’s vision of the Gulf Coast in Ship Breaker, with the more adult content and edge of The Wind-up Girl. To find her mother, Darcy will do anything (and it’s really not pretty, folks – but it’s believable, gritty, and real, and that’s what matters). The concept of America Pacifica as an island refuge in a planet destroyed by global warming is brilliantly realized in all its brutality and horror, from the inequity of its overpopulated banks, to the solvent clogged sea beyond. If nothing else, Ms. North does a beautiful job of world-building and setting, and also plays with important themes nicely (absolute power corrupting and all that jazz). In characters, things are similarly well-written, as Darcy’s thoughts are almost impressionistic, recalling memories of her mother juxtaposed against her interpretation of the things that happen around her. In many ways, America Pacifica is Darcy’s reluctant coming-of-age story; neither beautiful nor particularly smart, Darcy is a normal, passively accepting woman that would have been content to live the rest of her days with her much-loved mother in their small, sweat-stinking apartment. In her determination to find her mother and the stilted thought-process that defines this narrative, however, Darcy comes to life as a memorable, sympathetic character.

These praises said, America Pacifica is very clearly a debut novel, and suffers from a number of first-novel types of issues. Namely, a lot of conversations that explain the history of America Pacifica (info-dumpy telling, as opposed to showing), a lack of intensity as the book approaches its climax, and some uneven storytelling. While the novel itself is based on a brilliant concept and the plot sounds great on paper, the execution of that story was cumbersome and ill-paced, spending far too much time on exposition and a disproportionately short amount of time on the actual meat and potatoes of the plot (especially in the book’s final act, with the revelation of America Pacifica’s past and future, and the fate of Sarah) – although I should say that I felt the direction of the book is spot on, and the ending is perfect (I could not have seen this book end any other way). Anna North, a seasoned online and short fiction writer, certainly has a story to tell and a unique, memorable style that is visually evocative and impressionistic – so despite the missteps in the storytelling, I have no doubts in the storyteller.

Overall, I finished America Pacifica with my thirst slaked, and my head full. This is a contemplative novel that, in spite of its flaws, leaves an impression on its readers. I, for one, cannot wait for more from Ms. North in the future.

Darcy knew this was a bad sign. Her mother never talked about the mainland, or about coming to Pacifica, or about what it was like to live on the island before it was overcrowded and overbuilt and falling apart at the edges, when it was still an exciting new escape from the frozen, used-up hulk of North America. Darcy knew Sarah had lived in a co-op in Seattle, that she’d come to the island on the first boat when she was just ten years old, that she’d done odd jobs until she got pregnant, when she became a pearl diver, that Darcy’s father’s name was Alejandro, and that he was dead. Everything else that happened to Sarah before Darcy’s birth was off-limits, and Sarah didn’t even get satisfyingly angry when Darcy asked about it. She just put on her faraway face, her face that said, even though I know everything there is to know about you, there are things about me that you will never know, and gave Darcy the only piece of advice she ever gave: “Don’t get stuck in the past.”

Reading Next: The Dark City by Catherine Fisher

Ebook available for kindle and nook