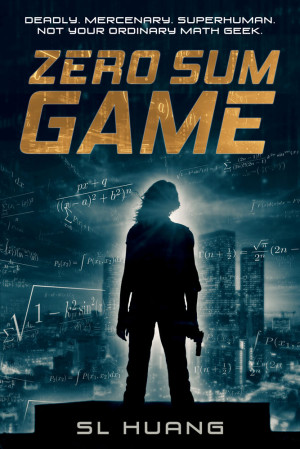 The vector calculus blazing through her head lets her smash through armed men twice her size and dodge every bullet in a gunfight. She can take any job for the right price and shoot anyone who gets in her way.

As far as she knows, she’s the only person around with a superpower . . . but then Cas discovers someone with a power even more dangerous than her own. Someone who can reach directly into people’s minds and twist their brains into Moebius strips. Someone intent on becoming the world’s puppet master.

Someone who’s already warped Cas’s thoughts once before, with her none the wiser.

Cas should run. Going up against a psychic with a god complex isn’t exactly a rational move, and saving the world from a power-hungry telepath isn’t her responsibility. But she isn’t about to let anyone get away with violating her brain — and besides, she’s got a small arsenal and some deadly mathematics on her side. There’s only one problem . . .

She doesn’t know which of her thoughts are her own anymore.

Stand alone or series: Book one in a planned series (yay!)

How did I get this book: ARC from author

Why did I read this book: I first heard about the author by reading her incisive bloggery on many of the recent topics surrounding fandom. It’s there I learned that she was writing and planning to self-publish this novel that sounded way too good for me not to want to read it.

I was supposed to start this review with the usual formal summary starting with “Cas Russell is a mercenary, etc, etc” but the awesome bit came out unhindered because this. Book. Is. Awesome.

Maths and guns. Mysterious superpowers. Deadly conspiracies and explosions. Questions of morality. PoC characters. Telepathy, badassery AND an unreliable narrator who knows she might be unreliable.

But going back to…

Cas Russell is a mercenary. Class: extractor. She gets hired to get in, get someone/something out, payment changes hand, the end. But Cas latest retrieval has not gone according to plan. The person Cas has just rescued has not only a shady, surprising past but also seems to be an item of interest to many underground operations. Except…maybe not? Maybe who “they” want is really Cas? But then again…maybe not? Maybe Cas is nothing but a tool so that “they” can get to her best friend Rio? And use his…expertise…to take over the world for nefarious reasons. But then again…maybe not.

It’s difficult to tell the truth when you are dealing with 1) two mysterious organisations with branches all over the world and 2) a telepath whose power is the ability to mess with your brain and memories.

So that’s the basic set up for Zero Sum Game and the plot progresses with twists and revelations and lots of thrilling shenanigans.

All of it underscored by Cas’ engaging voice and narrative: she is an anti-heroine, with a no-frills attitude who is stoic and smart and kind of an asshole. She is very confident too because of her near invincibility – because she has math skills which allow her to calculate all the vectors, angles, probabilities of all the situations she is in.

Can I say “awesome” one more time or are you already tired of hearing it?

Part of the mystery of the story – and this is barely touched on this first book in this series – is the fact that Cas obviously doesn’t remember much of her past or how she has this “power”. She doesn’t share this with anyone but her friend Rio (who seems to know far more about their shared past than Cas does). To anyone who has a basic familiarity with superheroes tropes it’s easy to guess what the mystery surrounding Cas’ origins might be and I love how the novel drops subtle clues that are picked up here and there like Cas’ frequent use of British words, for example.

The unreliable narrative is another great aspect of the story for me. The fact that we know that Cas has had an encounter with a telepath early on and that this telepath might have done something to alter Cas’ behaviour and memory is enough to keep us and Cas on our toes. Later on, more characters encounter said telepath and all of a sudden no one can be trusted. It’s fun, is what I am saying.

That said, I will admit that I was a little worried to start with for two main reasons: 1) I love maths but I don’t know maths, so I couldn’t tell if I was reading was all gibberish and 2) I was wary of the fact that Cas and her best friend Rio are a bit unhinged and always ready to shoot and kill – unquestioned violence is not fun. With regards to the former, I am reassured when a quick Google search tells me the author has majored in mathematics at MTI. The latter takes a bit more work as the plot progresses and is exactly what moved the book from “fun” firmly into “freaking good” territory.

Because questioning Cas (and Rio’s) ethics (or lack of) is the story’s main drive. On one hand, Cas is perfectly happy to not question anything. To shoot and kill. To be friends with Rio, a psychopath capable of horrible acts. Even if, like Dexter, Rio is moved by a “code” to only kill those deserving, the fact that he is the one to decide what that code is, is already enough to raise problems. But it’s only when Cas reluctantly sides with Arthur, a private detective with a strong moral code who is always challenging her decisions that she realises just how violent her life is. When I say this, I am not talking about a black and white situation: the book does allow for a grey area to stand – this is all the more true because the central mystery focus on those moral questions about making harsh decisions, about the “greater good” and about ends that justify means. But the thing with Cas at the beginning is that she is often far too quick to kill just about anybody to get what she needs and Arthur merely shows her that those actions have consequences. It’s interesting and I love that the book shows Cas’ progression toward self-awareness without actually defanging her or her (awesome) skills.

Zero Sum Game is a bit of everything, tipping its toes in many genres (and doing it well, too): Science Fiction, Urban Fantasy, and Superheroes Comics.

To sum up (haha), read this book and then everybody wins, nobody loses.

“It’s okay. I can lose them.” I juked the steering wheel to the side and slammed on the gas, shooting through the next intersection just as the light changed. Arthur yelled. In the rearview mirror, an SUV crashed spectacularly into the passenger side of the white sedan, and brakes screeched as three other cars skidded on the wet streets, spinning to a stop and completely blocking the intersection behind us.

“What the hell!” cried Arthur.

“You could’ve gotten us killed!”

“Please. That was child’s play.”

“You might’ve gotten other people killed!”

“At those velocities it would have been their faults for buying death traps.” It was true, though I hadn’t thought it through in so many words beforehand. I decided against telling Arthur that.