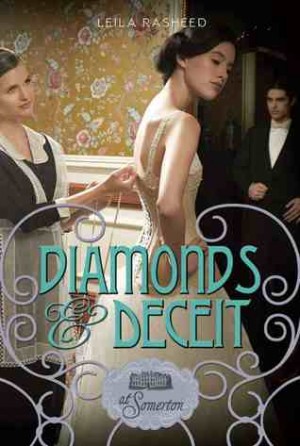 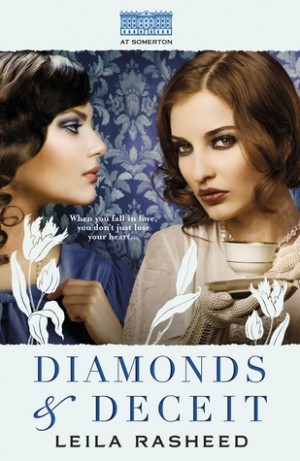 One house, two worlds…book two in our sumptuous and enticing YA series about the servants and gentry at Somerton Court.

London is a whirl of balls and teas, alliances and rivalries. Rose has never felt more out of place. With the Season in full swing, she can’t help but still feel a servant dressed up in diamonds and silk. Then Rose meets Alexander Ross, a young Scottish duke. Rose has heard the rumors about Ross’s sordid past just like everyone else has. Yet he alone treats her as a friend. Rose knows better than to give her heart to an aristocrat with such a reputation, but it may be too late.

Ada should be happy. She is engaged to a handsome man who shares her political passions and has promised to support her education. So why does she feel hollow inside? Even if she hated Lord Fintan, she would have no choice but to go through with the marriage. Every day a new credit collector knocks on the door of their London flat, demanding payment for her cousin William’s expenditures. Her father’s heir seems determined to bring her family to ruin, and only a brilliant marriage can save Somerton Court and the Averleys’ reputation.

Meanwhile, at Somerton, Sebastian is out of his mind with worry for his former valet Oliver, who refuses to plead innocent to the murder charges against him–for a death caused by Sebastian himself. Sebastian will do whatever he can to help the boy he loves, but his indiscretion is dangerous fodder for a reporter with sharp eyes and dishonorable intentions.

The colorful cast of the At Somerton series returns in this enthralling sequel about class and fortune, trust and betrayal, love and revenge.

Why did I read this book: Last year I had the pleasure of reading Leila Rasheed’s first Somerton novel, Cinders and Sapphires. This unapologetic flagrant riff on Downton Abbey was delightfully melodramatic, and I loved it very much. Needless to say, I was eager to return to Somerton in book 2.

The London Season, 1913. Following the dramatic revelation that she is actually the illegitimate daughter of Lord Averly, Earl of Westlake, plain housemaid Rose Cliffe has been elevated to Lady Rose Averly – and is now in the throes of her first London Season. Though Rose has been wholeheartedly accepted by her father and half-sisters Ada and Georgiana, she isn’t at all comfortable in high society. Everyone, it seems, knows of her humble origins and mocks her mercilessly at every event – the worst offenders are her own stepmother and stepsister Charlotte. At least Rose has no high hopes for future advancement; she isn’t particularly interested in finding a husband, and has the sole desire to finish the season so she can return to Somerton in peace.

Rose’s sister Ada also spends the season in a daze, trying to forget the yearnings of her heart and the forbidden love she still feels for Ravi, the young Indian man who has returned to his home country from Oxford. Ada has a proper engagement now to the handsome (and station appropriate) Lord Fintan, and vows to devote herself to a stable and responsible future with a man she might not love, but regards as a friend.

Fate, however, has a different plan in mind for Rose and Ada – the season brings with it passion and art, deception and secrets, hidden affairs and scandalous proposals. Once again, the lives of everyone from Somerton will be upended – for better or for worse.

Let me start this review by addressing the elephant in the room: Diamonds and Deceit is without a doubt the literary equivalent of a delightfully cheesy soap opera. Furthermore, it blatantly and shamelessly attempts to cash in on the widespread popularity of Downton Abbey – this is self-evident in the progression of the plot (down to the valet in prison and a tragic childbirth related death). These rather obvious things said, I should also begin this review with the candid assertion that I do not hold any of the above against the Somerton books. At all. Heck, these days I enjoy Somerton far more than I do Downton Abbey! Your mileage may vary of course, but this is my opinion, and I’m sticking to it.

So, with all these things under consideration, how does Diamonds and Deceit stack up, you ask? Not too bad. The delight in the Somerton books lies with the over-the-top melodrama and excessive plot twists, and Diamonds and Deceit easily outshines Cinders and Sapphires in that regard. This second novel is more of a traditional romance – there’s a Sexy, Misunderstood (and all-too eligible) Duke who enters the picture, who is almost immediately taken with young Rose. The two bond over their passion for art in all its forms – well, suffice it to say, it gets passionate. Meanwhile, Lady Ada has her own proposal and is headed down the path of responsibility – and a lifetime of unhappiness if she goes through with it. Of course, her appropriate fiancée is not as innocent and sweet as he seems as he harbors a love affair of his own with Ada’s stepsister Charlotte – thus spicing up the plot with Charlotte’s schemes to unveil Ada’s secret former relationship with Ravi in order to win Fintan for her own. Add to this Sebastian’s drama, as he is in love with his valet, Oliver (who also is Not Who He Says He Is), who has been imprisoned for MURDER – but damned what the papers say, Sebastian wants love and isn’t afraid who knows it. And, finally, there’s young Lord Michael, who is desperately in love with the nanny – a beautiful and kindhearted young Indian woman named Priya – but their secret love will be cruelly, violently tested by a true villain. OH, and lest I forget, there are also more shenanigans happening below stairs with drama between ladies’ maids – and Rose’s former friends.

That’s just a taste of what Diamonds and Deceit has in store. See what I mean? Delightfully cheesy, right?

Beyond the many dramatic twists, there are a few other points to recommend Diamonds and Deceit. I very much like the idea of progress and modernization, juxtaposed against a way of life from an older time as it is tangentially explored here. There is a national serving crisis in Britain, as the young workforce chooses to make their own fortunes in factories and commerce, rather than be beholden to masters of grand estates. Even Rose’s mother, housekeeper Mrs. Cliffe, finds her own path to success and independence. It’s a fascinating time, this early 20th century, with aeroplanes, telephones, and progress – viewing this change against the backdrop of a titled, aristocratic family is a potent mix. (This is also something Downton Abbey purports to explore, but never really does in any meaningful way. Point to Somerton.)

These praises said, Diamonds and Deceit is not without its shortcomings. Most notably, the minimal time spent on storylines with characters of color – Ravi and Priya, who were much more substantial members of the cast in Cinders and Sapphires – was frustrating (especially given a big, tragic development at the end of this novel). I was pleased to read the relationship between Sebastian and Oliver explored a little further in this book, but their love story is largely off-page as well. And, like book 1, there’s a lack of true character development in this second novel – Rose is very sweet and even-tempered and good, Ada is beautiful and similarly sweet, the rakish Duke is sufficiently rakish but not really a cad, and so on and so forth. The most interesting character, to me, was stepsister Charlotte – who, for all her schemes and bitterness has reason for her machinations. (I also very much enjoyed Charlotte’s brittle interactions with her mother – the most genuine relationship in the entire book, in my opinion.)

My only other complaint with the book is that there feels to be a slight disconnect with its predecessor – Diamonds and Deceit jumps forward and glosses over so many of the threads that were central to the makeup of Cinders and Sapphires. (So much so that a new reader could probably jump into the series with this book, should they so desire, without too much confusion.) Still, ultimately, Diamonds and Deceit is a fully entertaining read and the perfect guilty pleasure if you’re in the mood for scandal and romance.

And guess what? War is coming. Let’s see what the next chapter in the Somerton saga has in store.

Notable Quotes/Parts: From the Chapter 2:

Curious, Rose looked up at the terrace and saw a broad-shouldered young man standing on the top step, facing the crowd. He seemed to have just come through the open French windows. His hair was unfashionably long and tousled, the breeze plucked at his red-gold curls as if he stood on the bridge of a ship. Rose understood at once why people were staring and smiling. He wasn’t dressed at all for a garden party. His long sleeves were stained with something gray and blue, and he wore no hat at all. She found herself feeling irritated. Whoever he was, he was clearly so certain he would be well received that he hadn’t even bothered to dress correctly.
“The Duke of Huntleigh,” announced the butler.

“My dear Alexander . . .” Rose’s stepmother swept forward to welcome him, her brightest smile vying with her diamonds to out-dazzle the sun.

“Huntleigh!” exclaimed a lady nearby, and she and her neighbor glanced at each other. “Trust the countess to capture the season’s roariest lion.”

Rustles of excited whispers ran through the crowd like a forest fire. Clearly the Duke of Huntleigh was another desirable prize for the season’s ladies to grapple over. Rose had met a few of these prizes-not for long, no one wanted to waste time on a former housemaid who did not even have a dowry to go with her new title-and had quickly decided that not even a hundred thousand a year could make up for a lifetime of having to make conversation with them over the tea table.

Rose glanced up at the Duke of Huntleigh again. He was just walking down the steps with the countess; his mouth curved into a small smile as he looked at the crowd. It wasn’t a smile of happiness. There was something contemptuous in the way he waved away the footman who stepped forward to offer him a glass of champagne. Rose turned away. But no doubt everyone thinks his fortune makes up for his arrogance, she thought. Oh how I hate this world, where no one’s smile is real.

You can read an excerpt online HERE.

Reading Next: Jaran by Kate Elliott