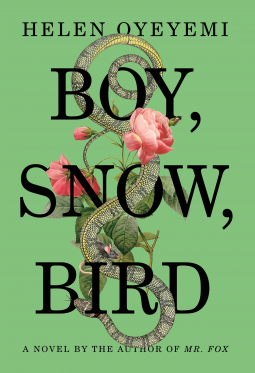 In the winter of 1953, Boy Novak arrives by chance in a small town in Massachusetts, looking, she believes, for beauty—the opposite of the life she’s left behind in New York. She marries a local widower and becomes stepmother to his winsome daughter, Snow Whitman.

A wicked stepmother is a creature Boy never imagined she’d become, but elements of the familiar tale of aesthetic obsession begin to play themselves out when the birth of Boy’s daughter, Bird, who is dark-skinned, exposes the Whitmans as light-skinned African Americans passing for white. Among them, Boy, Snow, and Bird confront the tyranny of the mirror to ask how much power surfaces really hold.

Dazzlingly inventive and powerfully moving, Boy, Snow, Bird is an astonishing and enchanting novel. With breathtaking feats of imagination, Helen Oyeyemi confirms her place as one of the most original and dynamic literary voices of our time.

How did I get this book: bought

Why did I read this book: I’ve been hearing really good things about Helen Oyeyemi’s books. Her previous book Mr Fox was almost universally praised by folks whose opinions I trust and I felt it was about time to give her books a go.

Set in the 50s, Boy, Snow, Bird follows Boy Novak as she escapes her father’s violent and abusive clutches to start a new life in a small town in Massachusetts. There she marries a widower, from the prestigious Whitman family and becomes a stepmother to his impossibly nice and incredibly beautiful, flawless daughter Snow. Everybody adores Snow but it’s not until Boy gives birth to her own daughter Bird that the depths and horror of that adoration become clear to her. For Bird is born a dark-skinned child, exposing the secret that the Whitmans are light-skinned African Americans passing for white.

Utterly in love with her own child and realising what having the light-skinned Snow always around would do to her, Boy steps into the role of wicked stepmother she seems to have been born to play.

Boy, Snow, Bird is an intricate tale that explores issues of identity, gender, motherhood, love and race in a loose retelling of Snow White. This is a beguiling and thought-provoking story, beautifully written and very, very dark. It strikes me how that darkness permeates most of this story but it’s almost like it is hiding behind a seemingly benign façade. This idea actually fits the themes here really well as in many ways this story is about appearances and unsurprisingly, mirrors have a huge role to play here. The story actually opens with :

Nobody ever warned me about mirrors, so for many years I was fond of them, and believed them to be trustworthy.

and continues to bring mirrors into the fold in many ways as all characters have encounters with mirrors: sometimes they can’t seem their reflexion, sometimes they see something else, sometimes they can barely look at themselves.
It’d be all too easy to cast mirrors as the real villains of this story. But of course, mirrors are nothing but objects and even though the story does have a few elements that could be interested as magic realism, the real villain here is the…world and the people who live in it.

The internalised racism, worship of whiteness as real beauty and the self-hatred present in the story are some of the most heart-breaking things I have ever read. I mentioned how Snow grew up adored by everybody but this is especially true when it comes to her grandparents, the first in the family to have been able to pass as white:

Snow’s beauty is all the more precious to Olivia and Agnes because it’s a trick. When whites look at her, they don’t get whatever fleeting, ugly impressions so many of us get when we see a colored girl— we don’t see a colored girl standing there.

Even though this is a story that has true love, and friendship and loving relationships as well as redemption, its core is one of tragedy and sadness. Just like it would be easy to pinpoint villains, it would be equally easy to pass judgment on the characters – all characters – by their failures. One of the most beautiful things about the novel is the way that the author allows compassion to seep through into the narrative by making it impossible for us not to feel a degree of sympathy for the characters, even at their worst, even when calling them out.

With regards to the narrative, Boy’s viewpoint comes first, then Bird and back to Boy’s. Snow gets very little of the focus from her own perspective which is actually an intriguing but valid choice. It is after all, the way that the characters view Snow that informs a lot of the story. That said, I found that the author did find interest ways to include Snow’s own voice in the tale.

Reading this was a pleasure: the structure of the novel, the voice, the characters, the thematic core were all brilliantly woven into this beautiful package of awesome. For at least 95% of the book I was in reading heaven and prepared to call Boy, Snow, Bird the best book of 2014 so far. But then…then the final 5% happened.

There is a jarring, out-of-place, last-minute revelation involving Boy’s parents that came from left field and felt not only tacked-on but also extremely problematic. Those revelations involve rape, trauma, transgender issues. Regardless of how it all somewhat fits the overall theme regarding gender and identity, the fact remains that to me, it feels extremely problematic to introduce a last-minute trans character whose trans identity exists only in a place of insanity, trauma and sociopathy.

Nevertheless, even though the final result is unfortunately, not as perfect as its promising beginnings, Boy, Snow, Bird is still a notable read of 2014.

I may or may not have hated my own face sometimes. I may or may not have spent time thinking of ways to spoil it somehow. (Maybe that answers your question about being “beautiful.”) But I’m slowly coming around to the view that you can’t feel nauseated by the Whitmans and the Millers without feeling nauseated by the kind of world that’s rewarded them for adapting to it like this.

Rating: 8 – Excellent, but with some sizeable reservations regarding the ending