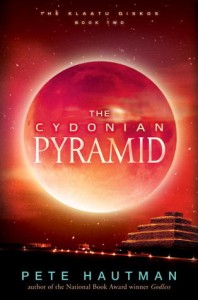 The much-anticipated sequel to The Obsidian Blade transports readers to the terrifying and thrilling world of Lah Lia, the enigmatic girl who changed Tucker Feye’s life.

More than half a millennium in the future, in the shadow of the looming Cydonian Pyramid, a pampered girl named Lah Lia has been raised for one purpose: to be sacrificed through one of the mysterious diskos that hover over the pyramid’s top. But just as she is about to be killed, a strange boy appears from the diskos, providing a cover of chaos that allows her to escape and launching her on a time-spinning journey in which her fate is irreversibly linked to his. In this second volume of the Klaatu Diskos trilogy, Tucker Feye and Lah Lia each hurtle through time, relating their stories in alternating viewpoints that converge at crucial moments. Fans of the first adventure will be intrigued by the chance to see the world through Lah Lia’s eyes — no matter how disturbing the vision might be.

Why did I read this book: This is the sequel to one of my favourite books of 2012, The Obsidian Blade

The Cydonian Pyramid is book two in the Klaatu Diskos trilogy, sequel to The Obsidian Blade, which was one of my Notable Reads of 2012. I thought The Obsidian Blade to be a thought-provoking and fun Science Fiction novel, with a well-conceived Time- Travel element at its centre. In that book, the main character Tucker Feye becomes a time-traveller after stumbling on shimmering disks – the Klaatu Diskos – that have been created by our incorporeal, future descendents who create the disks to observe past events for the fun of it. Tucker’s journey is a very personal one, once propelled by his parents’ disappearance and later evolving into a matter of historical life and death as he travels back and forth in time. One of the main threads of that novel is his constant encounters with a mysterious teenage girl named Lah Lia.

The Cydonian Pyramid starts right after the cliff-hanger at the end of The Obsidian Blade, with Tucker re-emerging from a disk into the past, where he recovers from his injuries under the tutelage of a Cold-War era’s doctor. The time spent with Tucker is very little though – this book is not his. This book is Lah Lia’s: and the narrative soon shifts concomitantly to the future – where a young Lah Lia lives in the shadow of the Cydonian Pyramid – but also to the past because at that point in time, Lah Lia and Tucker have not met yet.

In a nutshell: The Cydonian Pyramid is The Obsidian Blade retold from Lah Lia’s perspective, only what is her present-time perspective is actually Tucker’s past and the dual timelines proceed to converge later in the book. This is not as confusing as I am probably making it up to be although it does help to have the events of The Obsidian Blade fresh in your mind.

The story follows Lah Lia, who just like Tucker in the first book, starts out as a naïve young teen and whose arc is both extremely personal and intrinsically linked to the history of the world. Lah Lia has grown up as a pampered Pure Girl in one of the Lah Sep temples, raised to be sacrificed to the diskos by this theocracy that rules over in the future. As Lah Lia is about to be killed, a strange boy (whom we know to be Tucker) emerges from one of the diskos, creating a diversion that allows her to escape. She jumps in time starting a journey back-and-forth and the more she sees, the more key events she witnesses, the more she realises that nothing is as she has been told.

The more I think about The Cydonian Pyramid, the more I like it. It is very clear that witnessing the same events from Lah Lia’s point of view is less about rehashing what we know and more about adding extra layers to our previous knowledge. This makes the story not only clearer but also more insightful. One of my favourite things about the series is how the author explores times and history, questioning them and writing them as constructs. Everything is questioned, including the active role that humankind has in not only shaping history but also in the way that we interpret and rewrite history with every generation.

My absolutely favourite aspect of the book though is to see the ways that the women of the Lah Sep are written. Lah Lia has been brought up as a Pure Girl and to be sacrificed once she reaches a certain age. It is only girls who go through this in this version of the future and this is questioned in the story beautifully not only in terms of gender oppression but also in the larger context of poverty and politics. I loved how the older women in the temple trained the girls to fight, and prepared them so they could try to survive their ordeal, as much as they prepared themselves for an upcoming revolution.

On the downside and this has unfortunately diminished my enjoyment of the series as a whole, the connection between Lah Lia and Tucker veers very dangerously on fated-lovers territory, born out of an insta-connection that seemed kind of forced. In fairness, the author has yet to let me down in the way he builds his story and since there is one last book to go, I remain optimistic that the final instalment will address this in a convincing way. All that said, this series is good Science Fiction and I can’t wait to see how it all ends.

Notable Quotes/ Parts: No quotes, but you can read a sample here.

Reading Next: Handbook for Dragon Slayers by Merrie Haskell