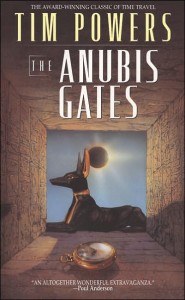 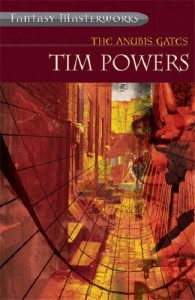 Brendan Doyle is a twentieth-century English professor who travels back to 1810 London to attend a lecture given by English romantic poet Samuel Taylor Coleridge. This is a London filled with deformed clowns, organised beggar societies, insane homunculi and magic. When he is kidnapped by gypsies and consequently misses his return trip to 1983, the mild-mannered Doyle is forced to become a street-smart con man, escape artist, and swordsman in order to survive in the dark and treacherous London underworld. He defies bullets, black magic, murderous beggars, freezing waters, imprisonment in mutant-infested dungeons, poisoning, and even a plunge back to 1684. Coleridge himself and poet Lord Byron make appearances in the novel, which also features a poor tinkerer who creates genetic monsters and a werewolf that inhabits others’ bodies when his latest becomes too hairy.

Why did I read this book: It appears in pretty much ALL Steampunk Essentials list. I had to read when we decided on a second Steampunk week.

Oh, look, there is an elephant in the room. Let’s get this thing out of the way first: what prompted me to read The Anubis Gates is its presence in many lists of Steampunk essentials. After reading it, I am completely baffled as this book is not by any stretch of imagination, a Steampunk novel. For starters, there is not a shred of science (or Steam) in the book nor there is any Punk – although there is a look at poverty and there is plot to remove the King, these are not subversive enough. I have seen some mentioning that what deems it Steampunk is the fact that 1) it is set in Victorian times as most Steampunk and 2) there is time travel. With regards to the former: er, no. NO. The Anubis Gates is not set in Victorian times. The story takes place in 1801, 1810, 1983 and the 1600s. None of those are Victorian. The Victorian period starts in 1837 when Queen Victoria came to the throne. The fact that a book is set in the 19th Century does not automatically make it a Victorian novel. This one in particular is set in Georgian times, pre-Regency and if the date does not give a hint, the fact that the premise of the book is based on a plot to kill KING GEORGE, should be enough. Here ends the History rant.

As for the latter, the time travel is not done by any Scientific means but by magic which to my mind, firmly sets the novel within the Fantasy genre rather than the SciFi-ish Steampunk. And, now that the elephant is out of the way, I can say: and what a glorious Fantasy novel this is.

Back in the early 19th century a group of Gypsy magicians prepares to bring down the British Empire and restore freedom to Egypt by unleashing the power of Ancient Egyptian Gods. Their attempt fails and magic gates end up opened across time and space as a result. In 1983, Brendan Doyle is a literary scholar who is hired by a millionaire J. Cochran Darrow, who discovered a pattern in the gates and means to explore them, to be the guide of a group of well-off clients back in time to attend a lecture by famous poet Coleridge. Doyle is excited about the trip not only for the opportunity to see Coleridge in person but also for the chance to find out more about obscure poet William Ashbless who is to be the subject of his next book.

The tour goes well to start with but Doyle ends up missing the return trip when one of the magicians, a Dr Romany, kidnaps him after witnessing their jump to his time. Doyle flees the guy but ends up stuck in 1810 and that’s when his adventure truly starts. Beggars, creepy clowns, kas, a werewolf who jumps from body to body, a girl dressed as a boy to seek revenge, a trip to the 17th century and back, all of this and more are present in an almost flawless story.

It doesn’t start off smoothly though. Yes, a little suspension of disbelief is required to start with. Weird as it sounds, it is easier for me to buy the time travel based in magic than to buy that for example, a couple of literary types can afford it. Not with Darrow charging upwards to a million dollars for it. It was also difficult to understand how blasé Doyle was about the whole time travelling and his role in it.

And here lies my main problem with the novel : the main character. Doyle is never truly fully realised, in a three dimensional way. For most of the book, he comes across as a non-entity, a boring, passive fellow who doesn’t even have a moment of real fury about being stuck in time. Although some of it is deftly handled as Doyle thinks he will do mighty well because of 20th century “advantage” of knowing what is going to happen or when and then meet people and suggest a few inventions (light bulb, flush toilets, etc). He even muses about the dangers of altering the course of recorded history . He is the time traveller who knows the tropes of time travelling. But ironically, Doyle has a hard time adapting and he discovers things are not that easy.

There are some small moments of genius in Doyle’s character and the (awesome) ending, for example does more for the character than the entire book. Plus I really like some of the absolutely great secondary characters such as Jacky (the girl dressed as boy living as beggar) or the creepy Horrabin, leader of a group of organised beggars – who is a mixture of Fagin and Moreau.

Flawed as it is, in my opinion, when it comes to characterisation, The Anubis Gates is truly and deeply a plot-driven novel and plot reigns supreme here. Anyone who is remotely familiar with time travel stories will know that there is always and forever, a certain degree of predictability. We all know, when we are reading about someone time travelling, that something is going to happen to alter story or history somehow. Here, one of the main twists is even very clearly foreshadowed from the get go. But to those in the know, the cool thing is to see “how” everything ends up happening the way they do. And I can only say that Tim Powers does it brilliantly here – even with all the foreshadowing, any predictability goes out of the window pretty soon and we are surprised with many twists and a-ha moments when everything comes together in a very tightly woven plot.

If you like plot-driven time travel novels, you can’t possibly miss this one.

BUT IS IT STEAMPUNK? Absolutely NOT and I can’t stress this enough. As I said in the intro, the driving force behind the time travel is magic, not science or technology. There is no out-of-time technological advancement, no steam, no punk, no true steampunk element to call this a Steampunk novel. It is a great Fantasy (with a few elements of horror) novel, though.

Notable Quotes/ Parts: there is one a-ha moment in particular that turned the book to me. Until that moment, I was merely enjoying it, then it became “read or die”.

Additional Thoughts: This was my first Tim Powers’ novel and I don’t want it to be the last. Any suggestion as to which I should read next?

Verdict: An absolutely great, fun, time travel story. I could have done with more character development but in the end it didn’t matter too much. It is easy to understand how this is a Fantasy Masterwork (tm Gollancz) .

Reading Next: Steampunk edited by Jeff and Ann Vandermeer.