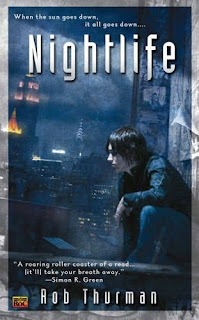 Summary: (from amazon.com)
In New York, there’s a troll under the Brooklyn Bridge, a boggle in Central Park, and a beautiful vampire in a penthouse on the Upper East Side. Of course, most humans are oblivious to this, but Cal Leandros is only half-human. His father’s dark lineage is the stuff of nightmares-and he and his entire otherworldly race are after Cal.

He and his half-brother Niko have managed to stay a step ahead for three years, but now Cal’s dad has found them again. And Cal is about to learn why they want him, why they’ve always wanted him…for he is the key to unleashing their hell on earth. The fate of the human world will be decided in the fight of Cal’s life…

Why did I read this book: I’m always on the lookout for a new urban fantasy series, and this one’s rave reviews on Amazon hooked me. Plus, with male UF heroes a clear minority in the genre, I felt obligated to give this book a try.

Caliban Leandros is a troubled young man. And, like most troubled young people, the reason for all his problems is his parents–however, the scope of Cal’s parental issues dwarf those of the typical sullen adolescent. Caliban is half human and half monster; the direct product of a cold cash business transaction between his broke, swindling mother, and a “Grendel”. Though he looks and feels fully human, his abusive, cold hearted mother never lets him forget what a little monster he really is–choosing even the name Caliban, the demon from Shakespeare’s The Tempest, for her hated son. Though things are hard for young Cal, he also has an older human half-brother named Niko who is fiercely protective of Cal and does everything in his power to take his little brother away from his mother. For Cal’s entire life, he and Niko have seen lurking Grendels around every corner, waiting & watching Caliban. And then, one night when Niko has loaded up his car and is ready to drive off with his little brother–the Grendels pull Caliban into their world, vanishing into thin air and leaving Niko heartbroken and desperate. After two days, Cal reappears–but has aged two years in his absence, and has no memory of any of it. Niko and Cal take off immediately, running from town to town, trying to keep ahead of the monsters that want Cal back for their own. They make it to the Big Apple before things really get out of hand, and the Grendels are back, full force.

This solid debut novel from Rob Thurman impressed me on multiple levels. While there is a LOT of Urban Fantasy out there, Thurman manages to stake a name for herself in the genre with this alternate New York, and the touching relationships her characters have. Caliban, our first person narrator, begins the story as an abrasive, sulky nineteen year old who clearly idolizes his brother Niko, but at the same time feels hurt and guilty for holding Niko back from his own life. My favorite dynamic of this story is the relationship between these two characters, and I appreciated the major themes of brotherhood, family, and love.

So far as the plot is concerned, Nightlife is a sharply written novel, full of action and sufficient revelation–although the actual overall storyline (halfling young boy has unforseen magic powers is the Key to Earth’s Salvation/Destruction) isn’t anything new. What is unique, however, is Thurman’s new spin on the realm of the fey and the different approach to traditional mythology in his world. The “Grendels”, as Cal and Niko name them, are actually Auphe–or Elves. Instead of being the tall, benevolent willowy blondes with pointed ears of the Tolkien persuasion, these Auphe are the stuff of nightmares. They are vicious, hideous monsters, bent on violence, cruelty, and–of course–world domination. The other creatures in Thurman’s universe are for the most part unpleasant–there’s the hulking, nasty troll that lives in the miasma under the Brooklyn Bridge, and the Boggle that filches wallets and feeds on anything–or anyone–it can in Central Park. And finally, most threateningly of all, there is the male banshee Darkling that steals and possesses what he will. While the actual settings are not as well described or even integral to the plot (this easily could have been set in any major city other than NYC), it is Thurman’s vivid descriptions and characterizations that bring Cal Leandros’s universe to life.

In the tradition of most Urban Fantasy, Nightlife is narrated in the first person by protagonist Cal. I very much enjoyed Cal’s narration–his snarky attitude and “who cares” sort of personality give the book a snappy, enjoyable voice. What’s better is that as the story progresses, Cal steps beyond being just the tough-ass narration, giving flashes of his emotions, fears, and most importantly the deep-seated respect and love for his older brother that pervades his thoughts. This lends Cal a vulnerable, very human side, especially as he grapples with what it means to be half-monster. Reading Cal’s thoughts, I felt the character came across as wholly believable as a tough but coping teenage male–not knowing how to express his emotions, giving his brother a hard time, eating a lot of bad food, and sleeping a lot. He tries to insist that everyone call him by his full name Caliban–to bear the burden that he is part monster and as a form a self-inflicted punishment–and yet Niko refuses and will only call him by his nickname, Cal. Caliban’s guilt for bringing his brother down is touching to read–he brags to readers that Nik is the smartest guy he knows, boasting about how he got into university through won scholarships, but in the next breath berates himself for depriving Niko of a “normal” life, yet desperately glad he has his brother with him. At the same time, Niko is fiercely protective of his younger brother, devoting his life to studying and beating the monsters that seek Cal, making sure that both he and his little brother are always prepared for the next Grendel they might see. Quite literally–all Niko and Cal have is each other, and as they struggle with surviving, their relationship as close brothers keeps them moving forward to deal with the nightmares they live together.

The other notable main character introduced in this novel is one Robin Goodfellow, used car salesman and Puck. Yes, that Robin Goodfellow of Shakespeare’s A Midsummer Night’s Dream–mischievous, randy, and yet becomes a dear friend to Niko (who he wants to seduce) and Cal (who he initially dislikes, but comes to care for). Tired of his very long and lonely life, Robin forces his way into the brothers’ lives–and hopefully he will be around in the next novel.

Notable Quotes/Parts: An example of Cal’s wonderful narration, and a family encounter with daddy Grendel–

The Grendel hung outlined in the window by a scrubbed and shining lunar light. One hand was splayed on the glass with long thin fingers and skin as pale as the moon. A narrow, pointed face grinned at me with a thousand needle teeth and the predatory cheer of a fox in a henhouse. Slanted almond-shaped eyes glowed with sullen reds, scarlet as blood. Tapered ears pressed flat to the skull, and long hair as fine as milkweed shimmered in the air like a corona. The finger tapped again, the nail a metallic ticking against the glass, and a voice spoke. It was a serpent’s hiss wrapped around the wet crunch of gargling glass. One word. Just one. It was enough.

The roiling-lava eyes looked down at me with more pride than I’d ever seen in my mother’s. Or maybe it wasn’t pride so much as rabid avarice. I’d seen Grendels before, more times than I could count, but never like this. Never so close I could see the naked greed in the eyes, the poreless texture of the skin, hear the utterly alien whisper.

Jesus Christ, my mom had fucked that?

Additional Thoughts: Fantasy novels historically have been pretty male dominated in terms of main characters/protagonists–so it’s interesting to note that the Urban Fantasy genre is overwhelmingly dominated by female characters using the first person POV. In this world, male protagonists are few and far between–and I have only had the pleasure of reading a few leading men in this arena. Besides Cal Leandros, there’s Harry Dresden, Simon Canderous, and Connor Grey that I have read or have on my radar. Are there any other male-protagonist centered Urban Fantasy novels someone would care to recommend?

Verdict: Nightlife is a wonderful first novel and a strong addition to the growing dark urban genre. I highly enjoyed this well written and surprisingly touching book, and will be returning to Cal’s world very soon.