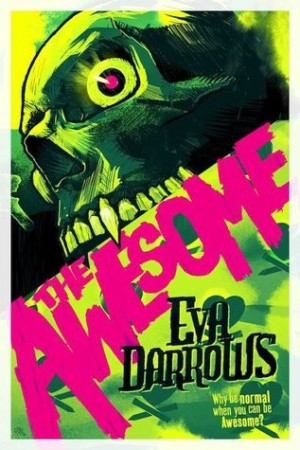 Seventeen-year-old Maggie Cunningham is tough, smart, and sassy. She’s also not like other girls her age, but then, who would be when the family business is monster hunting? Combat boots, ratty hooded sweatshirts, and hair worn short so nothing with claws can get a grip, Maggie’s concerns in life slant more toward survival than fashion or boys.

Which presents a problem when Maggie’s mother informs her that she can’t get her journeyman’s license for hunting until she loses her virginity. Something about virgin blood turning vampires into pointy rage monsters. Insides being on the outside and all that.

Maggie’s battled zombies and goblins and her fair share of house brownies, but finding herself a boy proves a much more daunting task than any monster hunt. Did you know normal girls don’t stuff their bras with holy water balloons? Nor do they carry wooden stakes in their waistbands. And they care about things like “matching” and “footwear.” Of course, they also can’t clean a gun blindfolded, shoot a crossbow, or exorcise ghosts from a house. Which means they’re lame and Maggie’s not. Because Maggie’s awesome. The Awesome, in fact.

Just ask her. She’d be more than happy to tell you.

After she finds herself a date.

Why did I read this book: THE COVER. Seriously, to be completely upfront and also completely superficial for just a sec, the cover is what drew me to this book. It’s all kinds of late ’80s/early ’90s B-movie horrorific, and I am a sucker for B-movie horror. THEN, after falling in lust with the cover, I read the synopsis of the book and was intrigued – YA urban fantasy featuring a mother-daughter team and a magical take on sex? OK. I was in.

Maggie Cunningham isn’t your typical teenager. Daughter of a single parent, Maggie spends her days honing her skills to become a full-fledged hunter like her mom, Janice – that means homeschooling, with major emphasis on supernatural ass-kicking, and a minor in creative and quippy profanities whilst kicking said supernatural ass. There’s just one tiny problem in Maggie’s awesome life – in order to become a journeyman and complete the next step of her Hunter-in-training status, she’s gonna have to have The Sex.

See, there’s something special about virgins that drives vampires batty (bad pun intended). Virgin, untainted blood is a powerful vintage – and wannabe hunters who walk around boasting that virgin blood are liable to get bitten and killed very quickly. If Maggie wants to graduate from level 1 and 2 jobs with her mom, she has to give up the V – the only problem is she doesn’t really know any dudes, let alone how to date them. With her best friend Janice’s help with the hookup, Maggie prepares herself for her most baffling, ridiculous, and terrifying job yet.

The Awesome is Eva Darrows’ first novel under that pseudonym – Darrows is also Hillary Monahan, author of The Summoning (another YA horror/supernatural book I read and enjoyed, and also boasts some similarities to The Awesome which I’ll get to shortly). And The Awesome is both awesomely packaged (the first edition of this book is gorgeous) and awesome in terms of character building and voice. Easily, the best part about this book is its heroine, the (rightly) self-proclaimed eponymous Awesome, Maggie. Quippy, witty, with as many snarky non-sequiturs as a Diablo Cody movie character, Maggie protects herself from monsters, disappointment and other would-be hurts with words and a badass attitude. She knows how to fight, how to stitch or glue up someone’s torn back, she knows to listen and keep her head down and react instead of overthink things when death is on the line. She also, secretly and maybe subconsciously, worries about her mother and their relationship, about being a “regular” teenage girl, and about how to go about getting The Sex to happen. In short: I love Maggie’s voice. While she does have the tendency to overdo it with the nonstop snark (in the tradition of great UF heroines for all ages), I love that she’s actually not jaded or world-weary. Maggie talks a big talk but her insecurities and vulnerability emerge, particularly regarding her relationship with her mother, with her friend Julie, and her relationship with Ian, which rings as incredibly genuine and natural. More than that, I love that for all of Maggie’s insecurities and fears, especially where Ian and Janice are concerned, Maggie always remembers one central truth: she knows that she is awesome.

For every bit as much as I loved Maggie in this book, I also loved the relationship between Maggie and her mother, Janice. This is not a traditional mother as superior relationship; the pair are incredibly close, and while their relationship can be strained because of Janice’s Hunter lifestyle (not to mention her choice to dance around in underwear, her open frankness when it comes to sexuality, and her fashion choices), the mother and daughter are a team. The respect is mutual in this relationship, and it is utterly fantastic to read the support and love between Janice and Maggie in The Awesome (as well as the snark and the many profanities the duo exchange).

Other things that were, well, awesome: Maggie’s depiction of the first time having sex from a teenage female perspective, drunken hookups and the aftermath of a house party, the awkwardness of navigating the ‘are we dating now what is this?’ waters. All of this stuff reads beautifully and Darrows nails it, especially the insecurities and things a lot of girls think of after their first time. I LOVE that sex isn’t something to be ashamed of here, and that Maggie’s mother is supportive, and that Maggie herself takes ownership of her choices with regards to her body and sexuality, and that there isn’t a weird judgement speech equating sex as having no self-respect. This is awesome, positive and powerful as a message.

Also awesome: the magical rules and worldbuilding of The Sex. The idea of magic being linked to sexuality and virginity isn’t a new thing in fiction; I remember reading and enjoying Diana Peterfreund’s Unicorn Hunter books, in which heroines are hunters of killer unicorns until they lose the V card… but being incredibly disappointed with the loopholes in those magical rules in that series, particularly when it comes to same-sex relationships. I’m very happy to say that The Aweseome deals away with some of that weird magical loophole homophobia – the rule for The Sex here is skin on skin penetration and completion. (Janice describes how this process works for lesbian hunters to Maggie when she asks.)

For all the good things in the story, however, there are some not so awesome parts: particularly when it comes to plot holes and overall packing/lack of story development. The AwesomeThe Awesome, and nothing really takes off here until the book’s final act, and the vampire drama is kind of unimportant window dressing. There are also plenty of unresolved plot holes and questions: who the heck is Jeff and why is he such a powerful vampire? What the heck happened to Laura and why is she such an unusual zombie (also what is her purpose in this story)? Why could Maggie smell certain things like Laura’s grave rot initially but can’t anymore (virginity magic)? Plenty of little and not-so-little things are frustratingly open-ended in The Awesome, which makes me think this is book 1 in a planned series.

Ultimately, though, The Awesome isn’t so much about the action as it is about a teenage girl learning how to balance her family expectation, friends, and social life. With monsters.

Fast-paced, fun, and snarkalicious, I enjoyed The Awesome very much. And I absolutely recommend it, especially to anyone looking for a sweet new urban fantasy novel from a kickass teen point of view.