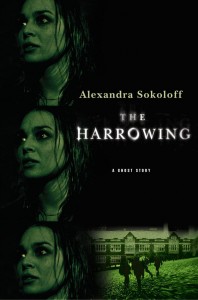 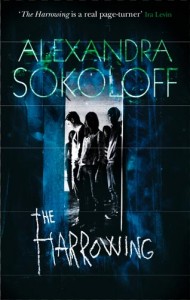 How did I get this book: ARC from the Publisher (UK)

Why did I read this book: I have heard of Alexandra Sokoloff before, and have been meaning to try her work for a while now – ever since I learned of The Harrowing‘s nomination for Stoker Award (Superior Achievement in a First Novel). When we were offered a review copy from the UK publisher, we thought, what better way to get Halloween Week underway than to review this title?

Summary: (from AlexandraSokoloff.com)
Mendenhall echoes with the footsteps of the last home-bound students heading off for Thanksgiving break, and Robin Stone swears she can feel the creepy, hundred-year old residence hall breathe a sigh of relief for its long-awaited solitude. Or perhaps it’s only gathering itself for the coming weekend.

As a massive storm dumps rain on the isolated campus, four other lonely students reveal themselves: Patrick, a handsome jock; Lisa, a manipulative tease; Cain, a brooding musician; and finally Martin, a scholarly eccentric. Each has forsaken a long weekend at home for their own secret reasons.

The five unlikely companions establish a tentative rapport, but they soon become aware of a sixth presence disturbing the ominous silence that pervades the building. Are they victims of a simple college prank taken way too far, or is the unusual energy evidence of something genuine – and intent on using the five students for its own terrifying ends? It’s only Thursday afternoon, and they have three long days and dark nights before the rest of the world returns to find out what’s become of them. But for now it’s just the darkness keeping company with five students nobody wants — and no one will miss.

On the eve of Thanksgiving Break, quiet, self-contained Robin Stone finishes her last classes and prepares herself for a long, lonely weekend in her dorm room. An outsider since birth, Robin is both looking forward to and dreading her reprieve from her bitchy, beautiful roommate and other Mendenhall peers. When the torrential rain starts to fall and Robin makes her way down to her dorm’s common room, she sees that she isn’t as alone as she thought – four other students join her for the weekend, each of them with their own secrets and personal baggage, each of them an outsider, just like Robin. When the electricity goes out, one of them finds an old ouija board – and eager for entertainment, Robin and the sexually suggestive Lisa decide to use the board. Robin doesn’t believe that anything will happen, but when they seem to have made contact with the other side, things start to get weird. The entity moving the pointer knows each of the five’s most intimate secrets – things that Robin and Lisa should not, could not know. The five have made contact with something, and it will not be ignored. As the weekend wears on, strange things begin to happen in the dorm – the common room is destroyed by unseen hands. Strange noises and whispers are heard. Each character has strange visits and encounters with a shadowy menace that grows stronger each day. Robin and her newly united friends must discover what the creature is and what it wants, before it destroys them.

Overall, I was surprised with how much I found myself enjoying The Harrowing – in a totally guilty pleasure, teen horror kind of way. The book reads quickly and is very cinematic; in fact, as the book progressed I could see the screenplay developing in my mind (incidentally, after finishing the book and checking out Ms. Sokoloff’s website, I see that she is in fact a screenwriter as well as a traditional prose author). This isn’t a bad thing – in fact, it gives her otherwise simplistic story a good, fun-cheese boost. Though her prose is basic and straightforward, Ms. Sokoloff manages to capture images that will have B-movie fans giggling with delight (I say “giggling” because these images are rather over the top, in a good way) – a possessed character licking a bloody axe, flickering candlelight in a dusty attic as characters surround an Ouija board, and, of course, quippy, horrible one-liners abound. There’s even a requisite research scene, for crying out loud! (No microfilm/microfiche though, unfortunately.)

Relying so heavily on these teen horror tropes is risky business – this novel easily could have been terribly bland and unreadable – but it all pays off in The Harrowing. It’s the perfect blend of fast paced writing and good, predictable nacho-grade cheese that makes it all inexplicably work. I truly enjoyed myself while reading this book.

While Ms. Sokoloff sticks to the script in terms of form, she does make one important deviation that makes The Harrowing that much more memorable, in this reviewer’s opinion. Instead of using the usual “enraged spirit” or Christian pantheon demon from Hell channeled through the ouija board, Ms. Sokoloff takes an ideological minority – her demonic entity emerges from Jewish lore. And this, dear readers, is really freaking cool. How often are demons or entities of evil portrayed through the lens of Catholicism in modern horror? Almost always. Ms. Sokoloff dares to take a different faith, a different pantheon in her novel, which pays off beautifully. I certainly was impressed.

As for weaknesses, well, besides the ideological shift, Ms. Sokoloff’s book isn’t really anything new or groundbreaking. Her writing, as I’ve said before, is straightforward and simplistic, as are her characters. The writing manages to work because of the aforementioned tongue-in-cheek look at teen horror tropes, but the characters are lacking. Protagonist and third person narrator Robin is a fleshed out character whom readers can relate to because of her loneliness and strength despite her initial fragility. I liked that Ms. Sokoloff took a chance by writing her story through the eyes of a heroine who has serious issues – she’s not the sweet, pretty, quiet virginal brunette that usually is the teen heroine. Though she is pretty, quiet, virginal and brunette, she’s not very sweet and her life is a hot mess – she’s depressed and suicidal at the beginning of the book, but she has a great character arc over the course of the story as she connects with others, finally. Unfortunately, Robin is the sole character who has this depth. The other five characters are enjoyable, but caricaturish – there’s the brainiac, the jock, the jock’s blonde sorority type girlfriend, the slut, and the “bad boy.” Again, the tropes are fun enough to make the story enjoyable, and I did like that each one of these characters are inherent “outsiders” and unite over their shared differences. I just wish I got to know each of them a bit more.

Still, despite the lack of depth in terms of character or subtlety in storytelling, I found myself enjoying The Harrowing immensely, in the best schlocky horror movie kind of way. It’s nothing new or exceptional, but it’s fun enough to pass a rainy, Halloween afternoon. I’ll definitely be on the lookout for more from Ms. Sokoloff.

It had been raining since possibly the beginning of time.

In the top tier of the cavernous psychology hall, Robin Stone had long since given up on the lecture. She sat hunched in her seat, staring out arched windows at the downpour, feeling dreamily disconnected from the elemental violence outside, despite the fact that every few minutes the wind shook the building hard enough to rattle the glass of the windowpanes.

In milder weather, Baird College was the very definition of pastoral. Wooded paths meandered between ivy-swathed stone buildings. Grassy hills rolled into the distance, dotted by trees . . . all unmarred by the slightest sight of civilization.

But now the old oaks lashed in the wind under roiling dark clouds that spilled icy rain on the deserted quad. In the bleak light of the storm, the isolation seemed ominous, the campus hunkered down under the pelting rain like a medieval town waiting for the siege.

The cold of the day had sunk into Robin’s bones. The wind outside was a droning in her ears, like the hollow rush of the sea. Inside, Professor Lister’s soft German accent was soporific, strangely hypnotic, as he quoted Freud from the wood-planked dais far below.

“ ‘The state of sleep involves a turning away from the real, external world, and there we have the necessary condition for the development of a psychosis. The harmless dream psychosis is the result of that withdrawal from the external world which is consciously willed and only temporary. . . .’ ”

Robin’s moody reflection stared back at her from the window: dark-eyed, somewhat untidy, elfin features framed by a tumble of nearly black hair. All in all, a chance of prettiness if she weren’t so withdrawn, guarded.

She pulled herself away from the glassy ghost of herself, blinked around her at a sea of students moored behind tiers of wooden desks.

People were shifting restlessly, looking up at the clock above the blackboard. A little before three, Wednesday. Tomorrow was Thanksgiving, and everyone was impatient, eager to escape for the holiday. Everyone except Robin. The four-day weekend loomed before her like an abyss.

Thanksgiving, right. Thanks for what?

At least there would be no roommate.

She sat with the thought of no Waverly for four days, and felt a spark of something—not pleasure, nothing so life-affirming as that, but a slight relief, a loosening of the concrete band that lately seemed to permanently encircle her chest.

And no one else, either, Robin reminded herself. No one at all. 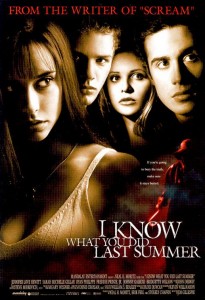 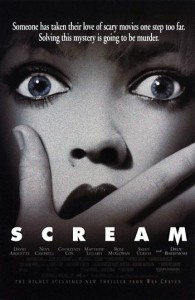 You know which ones I mean, the ones you used to eat up in middle school and high school. Films like I Know What You Did Last Summer, Scream, Urban Legend, Disturbing Behavior, The Faculty, Final Destination, The Craft, etc. *Note, I’m not including the ’70s and ’80s classics, because that’s a different “feel” altogether! These ’90s-onward teen scream flicks are embodied beautifully in The Harrowing.*

Verdict: Good, sexy, teen horror flick fun, The Harrowing is an entertaining read recommended for anyone looking for a lighter horror novel. This is a fantastic debut novel effort, and I’ll certainly be back to read more from Ms. Sokoloff in the future!

Reading Next: Hater by David Moody