This review is brought to you in conjunction with Hodderscape and the Hodderscape Review Project:

Here’s how it works: On the first of every month (or the Friday before, if it falls on a weekend), we’ll announce our Review Project title for the month, and talk a little about why we’ve chosen it. The book may be an undisputed classic. It may be something you’ve never heard of. It may (or may not) be a Hodder publication.

Over the course of the month, we’ll feature reviews of the book from our Review Project participants. Each participant has been chosen because of the honest, thoughtful, critical consideration they bring to the reviews they publish elsewhere. 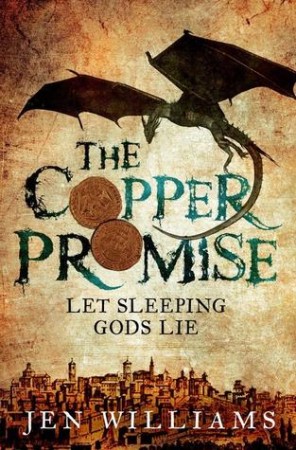 Some say the mages left their most dangerous secrets hidden there; others, that great riches are hidden there; even that gods have been imprisoned in its darkest depths.

For Lord Frith, the caverns hold the key to his vengeance. Against all the odds, he has survived torture and lived to see his home and his family taken from him … and now someone is going to pay. For Wydrin of Crosshaven and her faithful companion, Sir Sebastian Caverson, a quest to the Citadel looks like just another job. There’s the promise of gold and adventure. Who knows, they might even have a decent tale or two once they’re done.

But sometimes there is truth in rumour.

Soon this reckless trio will be the last line of defence against a hungry, restless terror that wants to tear the world apart. And they’re not even getting paid.

Stand alone or series: Stand alone (but could be the start of a new series?)

How did I get this book: Review copy via The Hodder Review Project

Why did I read this book: Because it sounded bloody fantastic.

There is a wondrous Citadel built by long gone mages, nearly impenetrable, always under guard and said to hold secrets, treasures and some even say, Gods. It is to this place that an unlikely group of travellers thrown together by greed and revenge make their way to.
For Lord Frith, the Citadel is his answer to an injured body and a thirst for revenge against those who tortured him, killed his family and stole his home. For Wydrin, the chance for adventure and for money in her hand is enough to make her say yes to escort that self-important princeling, in spite of the danger. For Sir Sebastian, a disgraced yet honourable knight, this sounds just like any other job.

It is not until they are trapped within the Citadel that they realise that they might have bitten more than they can chew. And that’s before they unleash the long forgotten Goddess of Destruction into the world. And they seem to be the only ones who can stop it. Provided they can get their shit together, that is.

I have mixed feels about The Copper Promise. On the one hand: Dragons! Adventure! Sword and Sorcery! A Most Dangerous Lady! A Gay Knight! A Broody Troubled Anti-Hero! On paper, everything about The Copper Promise sounded like it was a book Made For Ana. And in many ways, it is. It’s well written, the characters are for the most part, interesting and their motivation and arcs enough to keep the pages turning. I loved most of all the dynamics between them: the friendship between Wydrin and Seb and the love-hate relationship and budding romance between Wydrin and Frith. Wydrin is also quite the awesome, brash, funny character.

Split into four parts, The Copper Promise opens with a brilliant first act that introduces characters in the thick of action, is adventurous and gripping. On its own, that promising first act was everything I was hoping for.

On the other hand, each subsequent act builds upon the first one without quite measuring up to it not only in terms of character development but also in how each part reads almost like a disjointed piece of a whole that never quite gets together seamlessly. Transitions are abrupt, important events that place off-page and the last act is incredibly fast-paced to the point of hastiness considering the build-up and what was at stake for the world and for the characters. Simply put there was enough in here for a complete series of books and the way everything gets wrapped-up so fast and…so easily, does undermine any emotional payoff that had been alluded to in the build-up to it.

And here is another thing: I can’t help but to feel that The Copper Promise suffers of an identity crisis. There are elements of Sword and Sorcery here but also of Grimdark and I am not sure the two mesh that well? And I think most of it relates to its characters. Allow me to explain my train of thought: a lot of The Copper Promise is a great throwback to Sword and Sorcery-type of epic Fantasy with its bunch of rapscallions thrown together against all odds and who become reluctant heroes. And the narrative to me, does read as though it wants to make them straightforward heroes – we are supposed to root for them, to feel for them and to want them to get together and go away doing what a band of rapscallions do best in the end, after they saved the world.

But those characters’ motivations and personal arcs are very Grimdark to the point where they should really be anti-heroes? They kill, they maim, they torture – they commit despicable acts, they sell their soul do demons. But because the narrative wants them to be heroes there is no real consequence to any of that, at least not in the long-term. It’s like none of the terrible things they do matter at all. The result is defanged “darkness” for the light-hearted narrative makes sure of that.

And I feel that this goes beyond a mere conversation of whether these characters inhabit “shades of grey” rather than “black and white” territories. I am all for shades of grey and morally complex characters but it’s almost as though the narrative presents this complexity only but superficially, making them effectively shallow by disregarding the more profound change the characters’ actions might have brought.

Because then again: Dragons! Adventure! A Most Dangerous Lady! A Gay Knight! A Broody Troubled Anti-Hero! Plus truly diverse characters. In spite of the aforementioned problems, this was actually pretty fun. Here is hoping for a sequel that will address those issues, develop the characters further and also bring on the sexytimes.

“What is that?” he said, his fear briefly lost in curiosity. “Say, can you see something…?”

There was a brief suggestion of movement, followed by a blood-curdling scream from behind him. Gallo turned in time to see Chednit’s legs vanishing upwards, his body pulled up into the darkened ceiling. Like most men who sell their sword for money Gallo was as quick as a cat, and he reached forward to grab hold of his guide’s boot.

“Help me, help me!” squealed Chednit. He was waving the torch wildly, making the shadows jump and stretch confusingly. Gallo couldn’t see what had hold of him, but it was fearsomely strong. He pulled down on Chednit’s boot but the force pulling him up only increased, nearly pulling him up with the hapless guide. He would have to drop the sword to grab on with both hands, but his hand would not obey.

As quick as that the boot was gone, and Chednit flew up into the dark recesses of the ceiling. Gallo held his sword over his head as, unseen, his guide began to scream, over and over. There was a hot patter of what felt like rain against his upturned face, and something small and round dropped down past his nose, to chink against the stone steps and then bounce away into the dark beyond. He saw it only for a second in the guttering light of Chednit’s torch, but he recognised the jade eye with the silver pupil, now lost to the shadows at the bottom of the unending steps.

The whole thing had taken no more than a handful of heartbeats. The torch dropped down on to the steps behind him, smouldering and smoking, so he picked it up and blew it back into careful life. When the light was strong again, he held it up over his head, half-fearing to see Chednit’s grinning corpse flattened to the ceiling, a hole in his face where his eyes should be… but there was nothing there. He saw more of the same grey stones, the same green mould, and no sign of his guide. Gallo swallowed hard and tightened his grip on his sword.

“The place is cursed,” he spat. Now that the terror was over, he was filled with a black fury. How dare it take his guide from him? It was all going so well. To suffer such a loss at the very beginning of the adventure was unthinkable. Sebastian would be insufferable, for a start. “A foul thing, to pick off an unarmed man from above.”

“Would you prefer to meet face to face, young warrior?”

The voice was so close behind him Gallo could feel the tickle of warm breath on the back of his neck. He spun, sword out, but what met him on the steps of the haunted Citadel drained all the strength from his arms with one slow smile.

“I thought not,” said the voice, with a note of longsuffering humour. “They never do.”

Reading Next: Jaran by Kate Elliott

A Dude Reads PNR Double Feature: Scented Dreams & Where the Rain is Made