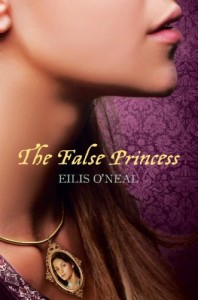 Stand alone or series: A standalone novel to the best of my knowledge, but there’s room for subsequent books

Princess and heir to the throne of Thorvaldor, Nalia’s led a privileged life at court. But everything changes when it’s revealed, just after her sixteenth birthday, that she is a false princess, a stand-in for the real Nalia, who has been hidden away for her protection. Cast out with little more than the clothes on her back, the girl now called Sinda must leave behind the city of Vivaskari, her best friend, Keirnan, and the only life she’s ever known.

Sinda is sent to live with her only surviving relative, an aunt who is a dyer in a distant village. She is a cold, scornful woman with little patience for her newfound niece, and Sinda proves inept at even the simplest tasks. But when Sinda discovers that magic runs through her veins – long-suppressed, dangerous magic that she must learn to control – she realizes that she can never learn to be a simple village girl.

Returning to Vivaskari for answers, Sinda finds her purpose as a wizard scribe, rediscovers the boy who saw her all along, and uncovers a secret that could change the course of Thorvaldor’s history, forever.

A dazzling first novel, The False Princess is an engrossing fantasy full of mystery, action, and romance.

Why did I read this book: I love a good romantic fantasy, and who doesn’t enjoy a good prince and the pauper trope? This is the type of lighthearted – but fully engrossing – work I was in the mood for.

Princess Nalia has always felt a little out of place at the palace, though she’s been a dutiful daughter. A bit clumsy, a bit shy, but altogether a compassionate and dedicated girl, Nalia is surprised when shortly after her sixteenth birthday she is formally summoned at midday by her royal parents – and what Nalia discovers will destroy the world she has always known. After the birth of the princess sixteen years ago, per custom the king and queen visited the Nameless God’s oracle, who predicted a heartbreaking and foreboding future for their only heir. The oracle saw the princess dying in a room of blood before turning sixteen, prompting the royal parents to take drastic, secretive measures. In order to protect their daughter and sole heir to the throne, the king and queen sent her to be raised in a gentile convent away from the palace and replaced her with a decoy. The girl that has always thought of herself as Princess Nalia is in fact a cast-off commoner named Sinda, and having successfully lived past the age of sixteen, Sinda is no longer required by the royal family. With the glamour that gave her the magical appearance of the princess stripped from her (including her three royal birthmarks on her left elbow), Sinda’s world is destroyed in a single day. Escorted from the palace and sent to live with her only living relative, a peasant dyer in the isolated countryside, Sinda struggles to make sense of this new, bitter world – and who exactly she is in it.

Life in the country is hard for a former princess. Though Sinda is quick at book learning and desperately tries to please her stoic aunt, her efforts are wasted as she has no aptitude for dying, and her natural clumsiness prevent her from accomplishing some of the simplest tasks. Losing her noble status, her family, and the comfort of her old lifestyle is hard, but perhaps the hardest thing of all for Sinda to reconcile with in her new existence is the fact that she has been isolated from her best and only true friend, the high-ranking lordling Kiernan. Then, when Sinda begins to manifest dangerous levels of magical ability, she knows she must return the city and learn to control her powers before she seriously hurts herself or others. Although the wizard academy initially wants nothing to do with the deposed fake princess, Sinda manages to find an eccentric teacher – and in the process, manages to reconnect with Kiernan. But while she goes about her studies, Sinda unwittingly uncovers a deep-seated conspiracy. The true princess, the monarchy, and the fate of Thorvaldor hangs in the balance, and only Sinda and Kiernan can set things right.

As one can surmise from the plot summary, The False Princess is a tale that is heavily steeped in fantasy and romantic tropes: the decoy monarch, the budding relationship between two best friends, latent magical abilities, far-reaching power conspiracies, etc. Yet although Eilis O’Neal’s debut novel plays with well-worn tropes, The False Princess is a delightful and engrossing story that executes these familiar elements beautifully. The most impressive thing about The False Princess is how effortless the storytelling feels (which perhaps should not come as a surprise given Ms. O’Neal’s experience as a writer with short fiction). The characterizations, pacing and romance flow gracefully and organically, which is no small feat. When I started this book, I was more than a little wary that the story would be too similar to Dawn Cook (aka Kim Harrison)’s The Decoy Princess, but I need not have worried as Eilis O’Neal manages to put her own unique stamp on this story of years of betrayal and deception (I won’t divulge exactly what The False Princess‘s “twist” is, but suffice to say it is a welcome complication to an otherwise straightforward story). Also, I loved the inclusion of magic in this traditionalist western European-based kingdom as well, and felt that the parameters of magical abilities were well defined and believable within the setting. Sinda’s lack of control, especially given the spell she has been under for sixteen years, makes perfect sense, and her struggles to manage her overflowing abilities add a new dimension of sympathy to an at times irksome character.

Which brings me to my next point, of characterizations. I loved that Sinda is a bit different from the super strong willed independent woman princess type – instead of fighting or defying her fate, she is actually quite passive and shellshocked for the much of the beginning of the book. Although her timidity and boneheaded passive aggressiveness (e.g. her almost pathological need for Kiernan to approach her and then rip him apart) is incredibly frustrating at times, I appreciated her as a flawed and realistic character that could clearly admit when she’d been wrong. I’ll admit that I’ve never had much patience for the clumsy character (clumsiness is not a substitute for character development *ahem, Twilight*), but Sinda has a number of redeeming qualities too. Of all the characters in the book, Sinda is the only one that truly is fleshed out, but the secondary characters, from Kiernan to the princess, are believable enough.

The False Princess put me in the mind of the sort of lighthearted fantasy novels of Sharon Shinn or even Shannon Hale. Although this isn’t a perfect book, The False Princess creates a believable and engrossing story about a girl that struggles to discover herself and find meaning in a world that has been torn asunder – which is, actually, a really cool metaphor for the turbulent uncertainty of adolescence. I truly enjoyed this book, and look forward to much more from the talented Ms. O’Neal.

Notable Quotes/Parts: The key opening scene of the book:

The King seemed to know what I had been going say. “Nalia has been raised in a convent some distance from here. She has believed that she is an orphan, but one with a noble patron. None of the sisters at the convent know any differently. She has been given a noble’s education, taught as well as a princess should be. She was told that one day she would come to court, as her patron wanted. It was safer for her not to know.”

“Have you seen her? Do you visit her?”

The King closed his eyes. “No. We have not seen our daughter since her birth.”

Our daughter, I thought. And then: He called her Nalia.

I felt tired, more tired than I had ever been in my life, so that it was hard to hold my head up and even harder to ask my next question. “Who am I? If I’m not her, then who am I?”

“Your father was a weaver in the city. We summoned him, told him our plan. He gave you to us willingly, and then Neomar altered his memory, making it seem to him that his baby had died.” At my exhalation of shock, he said, a little defensively, “It was safer. The fewer people who knew . . . .”

“And my mother?” The question was small and quiet. “Did she give me up as well?

The King shook his head. “He did not mention his wife.”

I clenched my gown’s skirts in my hands. It was too much, too much to comprehend. “Is he still alive?”

Again, that flash of sadness across the King’s face. “No. He died some years ago.”

The light from the windows pressed against me, as bright and sharp as diamonds. I am alone, I thought as I gazed around the Hall. All of this, all my life, it was a dream. And it is ending.

For the first time, the Queen stirred, raising her head to looked at me. “Sinda,” she said, her voice thin. “He said your name was Sinda.”

“Sinda,” I whispered. I waited for the word to have some meaning, to fill the empty place left when the golden haze had receded.

But the name just faded away, filling nothing, lost in the high-ceilinged Hall of Thorvaldor.

Additional Thoughts: From Alexandre Dumas’s The Man in the Iron Mask to Mark Twain’s The Prince and the Pauper, the switched monarch is a prevalent theme in literature. The title that immediately springs to mind when reading The False Princess, however, is Dawn Cook’s The Decoy Princess (which is a great story and well worth reading!). Here’s the breakdown: 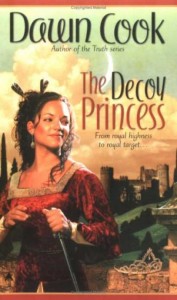 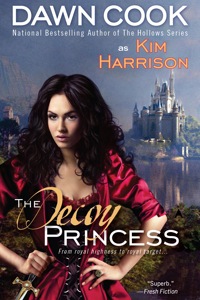 The Princess Contessa of Constenopolie has just learned of her true identity-that of an orphan adopted and raised as a decoy to protect the real princess. That doesn’t make Contessa less of a royal target.

Although I will say, I am NOT feeling these reissued covers for Dawn Cook’s older work.

Reading Next: Skybreaker by Kenneth Oppel