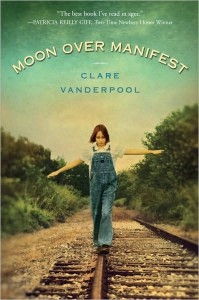 Abilene Tucker feels abandoned. Her father has put her on a train, sending her off to live with an old friend for the summer while he works a railroad job. Armed only with a few possessions and her list of universals, Abilene jumps off the train in Manifest, Kansas, aiming to learn about the boy her father once was.

Having heard stories about Manifest, Abilene is disappointed to find that it’s just a dried-up, worn-out old town. But her disappointment quickly turns to excitement when she discovers a hidden cigar box full of mementos, including some old letters that mention a spy known as the Rattler. These mysterious letters send Abilene and her new friends, Lettie and Ruthanne, on an honest-to-goodness spy hunt, even though they are warned to “Leave Well Enough Alone.”
Abilene throws all caution aside when she heads down the mysterious Path to Perdition to pay a debt to the reclusive Miss Sadie, a diviner who only tells stories from the past. It seems that Manifest’s history is full of colorful and shadowy characters—and long-held secrets. The more Abilene hears, the more determined she is to learn just what role her father played in that history. And as Manifest’s secrets are laid bare one by one, Abilene begins to weave her own story into the fabric of the town.

Powerful in its simplicity and rich in historical detail, Clare Vanderpool’s debut is a gripping story of loss and redemption.

Why did I read this book: This book won the Newbery Award in 2011 and I had been saving it to be read at the right time. The right time finally came after Halloween Week when after reading so much Horror I needed to read something that was definitely NOT-Horror and I felt like a historical novel would be the answer to my Halloween woes.

If there is such a thing as a universal – and I wasn’t ready to throw all of mine out the window – it’s that there is power in a story.

Winner of the 2011 Newbery Award, Moon Over Manifest is a historical novel set in the small town of Manifest, Kansas in 1936. It is an absolutely brilliant coming-of-age story following a young girl trying to connect to (and understand) her father by learning about his past.

12-year-old Abilene Tucker has lived all her life on the road with her father Gideon. But when she has an accident and nearly dies of infection, her father sends her off to Manifest to live with an old friend. Abilene is puzzled at first, not understanding why this small incident (and the fact that she turned 12) should have any impact at all in her life. Missing Gideon terribly and knowing that he has spent some time in Manifest in the past, Abilene sets out to unearth her father’s story, to try and learn about the boy he once was.

In doing so, she unearths the past of Manifest itself and of all of its citizens: Manifest is a mining town built on the blood of immigrants from all over the world, and the town has its share of secrets.

Those secrets are unveiled to Abilene through the local newspapers clippings (by Hattie Mae Harper, “Reporter About Town.”), a set of letters from a soldier shipped away in WWI writing to his best friend and the stories told by the town’s diviner Miss Sadie – who, ironically, knows a lot about the past but nothing about the future.

I just can’t even begin to tell how enamoured I am of this book. It is one of those deceptively simple slow-burning stories: the kind that needs to be savoured little by little so that the reader can truly absorb its subtle themes and its hidden meanings. It features stories within stories and the power that those stories hold in preserving memory as well as changing the future of a place. In many ways, Abilene’s narrative voice and the book’s overall atmosphere reminded of To Kill a Mockingbird as well as the more recent Boneshaker (minus the fantastical side).

There is a strong sense of place here and it is easy to picture Manifest in all is incarnations, its past and its present. But above all, through the letters and stories, it is also easy to really see how the characters affect the story of the town and vice-versa. Manifest is a living, breathing place and it evolves as its citizens do. As such, its inhabitants change it, are changed by it – in political, economical, cultural and social ways. They are not outside history either: Manifest is deeply affected by WWI, the Depression, Immigration, the Spanish Influenza and the Klu Klux Klan. It is really interesting to see how this sense of place plays into Abilene’s own story: as she cannot at first, find evidence of Gideon’s past in Manifest, she wonders what it means when a place doesn’t remember you.

Moon Over Manifest seamlessly incorporates certain aspects into its main thread very naturally and as such this book features a plethora of strong women in a matter-of-fact, diverse way. Their strength, mind you, is not necessarily overt or marked by physical power (which is how “strong women” is unfortunately, usually thought of). It is in the roles they play publicly as well as privately.

That said, although I loved the stories-within-stories, it took me a while to get used to the narrative choice of moving from first person to third person when Miss Sadie was telling Abilene the stories from the past. I also thought it weird that there was no word whatsoever about Abilene’s mother.

Those minor quibbles aside, when I think about all of this book’s qualities, the assuredness present in the storytelling, the strength of its characters and the emotional impact of this story (seriously, I was sobbing – good tears – at the end) I can hardly believe this is Clare Vanderpool’s debut. Worthy of the Newbery it won.

Like Abilene, I too believe that there is power in a story and there is definitely power in Moon Over Manifest.

The movement of the train rocked me like a lullaby. I closed my eyes to the dusty countryside and imagined the sign I knew only from stories. The one just outside of town with big blue letters: manifest: a town with a rich past and a bright future.

I thought about my daddy, Gideon Tucker. He does his best talking in stories, but in recent weeks, those had become few and far between. So on the occasion when he’d say to me, “Abilene, did I ever tell you ’bout the time . . . ?” I’d get all quiet and listen real hard. Mostly he’d tell stories about Manifest, the town where he’d lived once upon a time. His words drew pictures of brightly painted storefronts and bustling townsfolk. Hearing Gideon tell about it was like sucking on butterscotch. Smooth and sweet. And when he’d go back to not saying much, I’d try recalling what it tasted like. Maybe that was how I found comfort just then, even with him being so far away. By remembering the flavor of his words. But mostly, I could taste the sadness in his voice when he told me I couldn’t stay with him for the summer while he worked a railroad job back in Iowa. Something had changed in him. It started the day I got a cut on my knee. It got bad and I got real sick with infection. The doctors said I was lucky to come out of it. But it was like Gideon had gotten a wound in him too. Only he didn’t come out of it. Andit was painful enough to make him send me away. I reached into my satchel for the flour sack that held my few special things. A blue dress, two shiny dimes I’d earned collecting pop bottles, a letter from Gideon telling folks that I would be received by Pastor Howard at the Manifest depot, and my most special something, kept in a box lined with an old 1917 Manifest Herald newspaper: my daddy’s compass.

In a gold case, it wore like a pocket watch, but inside was a compass showing every direction. Only problem was, a working compass always points north. This one, the arrow dangled and jiggled every which way. It wasn’t even that old. It had the compass maker’s name and the date it was made on the inside. St. Dizier, October 8, 1918. Gideon had always planned to get it fixed, but when I was leaving, he said he didn’t need it anyway, what with train tracks to guide him. Still, I liked imagining that the chain of that broken compass was long enough to stretch all the way back into his pocket, with him at one end and me at the other.

So now that I read Moon Over Manifest I am all the more excited to read Clare Vanderpool’s upcoming Navigating Early. I just can’t wait. 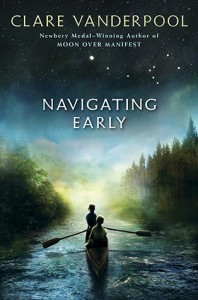 Reading Next: Days of Blood and Starlight by Laini Taylor