An action-packed, wonderfully diverse take on superheroes in the 21st century – and in the Chinese Zodiac pantheon. 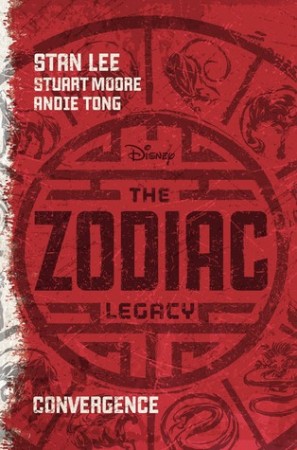 Stan Lee presents a brand new, magical, super-powered adventure! When twelve magical superpowers are unleashed on the world, a Chinese-America teenager named Steven will be thrown into the middle of an epic global chase. He’ll have to master strange powers, outrun super-powered mercenaries, and unlock the mysterious powers of the Zodiac.

Stand alone or series: Book 1 in The Zodiac Legacy trilogy

Why did I read this book: I was intrigued when I saw that Stan Lee was presenting a new prose-based superhero series – especially when I learned that the series in question featured a Chinese American protagonist and the Chinese Zodiac as the basis for this particular superhero pantheon. When we were given the opportunity to review the book and to host an interview with the creators, I was ever-eager to give the book a shot.

For fourteen-year-old Steven Lee, a class trip to China doesn’t quite go according to plan. First, there’s the fact that although he is Chinese-American, Northern California native Steven has always felt slightly in-between and out of place – and on this trip to his grandparents’ homeland, the feeling is even more pronounced. Second, there’s the discovery Steven makes in the New China Heritage Museum – namely, that magical abilities exist in the world, tied to the Chinese Zodiac and a particular shipan that can unlock magical power and latent energy. Oh, yeah, and third: after getting blasted by a ray of convergence energy, Steven is gifted with the powers of the Tiger – and is sucked into a desperate war against a sinister corporation called the Vanguard, whose leader aims to amass the powers of the Zodiac and control the world.

With the help of new friends and allies – Jasmine, resistance leader and Dragon; Carlos, a genius programmer and researcher; Roxanne, Parisian rocker and Rooster; Liam of Ireland, impervious as the Ram; Duane, skilled hacker and Pig; Kim, nimble teleporting Rabbit – Steven Lee is ready to take on Maxwell and the threat of his Vanguard soldiers. The future depends on it, after all.

The first book in a planned trilogy, The Zodiac Legacy: Convergence is chock-full of action, interesting new characters, and the beginnings of a grand rivalry between two ideologically opposed superhero (for lack of a better word) teams. It’s very X-Men Origins in structure, albeit with a welcome (and much-needed) diverse focus on cast and interpretation of superpowers. The very first thing I noticed and thought while reading Convergence is how closely the novel follows a classic superhero team arc – there’s the awakening of power, the reluctant call to action and response, and the race on two diametrically opposed sides to assemble and train a team. Instead of relative contemporaries with Charles Xavier’s Professor X and Eric Lehnsherr’s Magneto, however, the two opposed sides in this universe have very different sets of resources and skillsets. The Vanguard forces are led by the older and far more experienced Dragon power, Maxwell – a ruthless war profiteer with a private army and loads of money at his disposal. In contrast, the team standing against this military-style force is led by the younger, less-experienced Jasmine – who also wields the power of the Dragon, sans the experience, unlimited funding, and manpower. What she does have on her side, however, is a clearly defined sense of righteousness, guts, and a team of rag-tag newbies who are learning to master their newfound abilities. Including, most especially, Steven Lee.

The most compelling thing about this book, in my opinion, lies not with the ample fight scenes (and believe me, there are a lot of fight scenes), but rather with the characterizations. Steven Lee, our main protagonist, is the most well-rounded of the lot – a Chinese-American teen that feels out of place both in the United States, and even moreso in China. This distance, this sense of isolation, shapes Steven’s character and the decisions that he makes.

He thought about how all the locals in Hong Kong had expected him to speak Cantonses. He thought about the weird looks he’d get from his classmates when he ate the lunches his grandfather had prepared for him. He even thought about the Steel Mongoose, and his endless stores of bravery and resourcefulness. The way he seemed to be at ease anywhere.

For the first time, with Jasmine, and Carlos, and the team, he feels like he can make a difference and that he could truly belong – which helps drive and center Steven, helping him find his own way and sense of self.

This journey of self-discovery isn’t limited to just Steven, either; the entire Zodiac team under Jasmine’s lead (including Jasmine herself) grapple with these powers and identity questions. Jasmine puts on a brave front to guide and lead her team into battle, though it’s clear she’s struggling and stretching her own powers thin. More similar to Steven, there’s French musician Roxanne, who experiences fear and rejection from her family when her powers are unleashed, but gradually learns to control her supersonic voice (and fight those who would try to silence her). All the characters on this particular team go through similar arcs – and I thoroughly enjoyed learning about them all.

Along those same lines, another key strength for the Zodiac Legacy is the diversity of the cast, both hero and villain alike. These different cultural backgrounds, appearances, and voices are represented in each character’s specific backstory and in their actions, as well as visually by the illustrations from the talented Andie Tong. And, as learned from the interview we did with creators Stuart Moore, Andie Tong, and Nachie Marsham, diversity was a carefully researched and important point for the Zodiac Legacy series overall – and it shows in Convergence. While I can’t speak to the accuracy of the (initial) Chinese setting, or the power structure and worldbuilding inspired by the Chinese Zodiac, Convergence reads true, as both well-researched and respectful of the cultures it portrays in its pages.

But, while there are many things to love about this book, there are similarly some things that just aren’t quite as fleshed out as I’d have liked. This is, ultimately, a setup book – the lines are drawn and sides are picked, with the fate of the future and the world in the balance. Teams are assembled and much action ensues – but it’s all place-setting for a grander showdown in books 2 and 3.

But so far as place-setting goes, The Zodiac Legacy: Convergence does a beautiful job. I will absolutely be back for the next two volumes – and anyone who is a fan of fast-paced, comic book-style action is welcome to join me.

Notable Quotes/Parts: I would be remiss if I didn’t highlight the awesomeness of Andie Tong’s amazing art and portrayal of the characters in this series. See examples below:

And make sure to check out the interview with Stuart Moore & Andie Tong, plus a sweet giveaway, HERE.