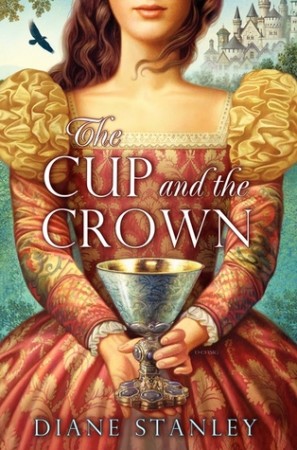 Title: The Cup and the Crown

Night after night, Molly has visions of a beautiful goblet: one of her grandfather’s loving cups, which he filled with magic that bound people together. So it hardly surprises Molly when handsome King Alaric asks her to find a loving cup to help him win the heart of the beautiful Princess of Cortova.

As Molly and her friends Winifred and Tobias journey far beyond the safe borders of Westria, a mysterious raven appears to guide their quest. It leads them through the rugged northlands and through the mountains to the hidden city of Harrowsgode. Molly discovers that although it’s difficult to enter the city, it’s even harder to leave. With the help of Tobias, a rat catcher named Richard, and her clever and devoted raven, Molly gains her own freedom in a most unexpected way and changes the city of Harrowsgode forever.

Master storyteller Diane Stanley returns to the intriguing world of The Silver Bowl to tell Molly’s latest exciting adventure. The Cup and the Crown will be enjoyed by fans of Molly and by readers who are meeting this spirited heroine for the first time.

Stand alone or series: Book 2 in the Silver Bowl series

Why did I read this book: I thoroughly enjoyed The Silver Bowl, and when I realized (only recently!) that this was actually a trilogy, I hurried to pick up and read this book.

Orphan, accused witch, and former scullery maid, Molly has come a long way from the palace kitchens. Now, Molly has become Lady Marguerite, a noble in King Alaric’s court – thanks to her pivotal role in saving the young prince from the curses of a silver bowl crafted by none other than Molly’s grandfather. Though noble life is tedious (and hardly to Molly’s liking, brash, crude and outspoken as she is), she’s more than happy to serve her dear friend and king. When Alaric comes to Molly with a dangerous task – to find a silver loving cup crafted by her grandfather, with the power to bind and bless two souls together for a lifetime – she eagerly offers to help. King Alaric desperately needs the cup to ensure the safety of his kingdom, and to do so must marry the Princess of Cortova to secure Westria’s access to the Southern Sea. Because of the curse on the royal family of Westria, however, Alaric fears his chances of making a match with Princess Elizabetta are slim – so he must rely on his Molly and magic.

Luckily for Alaric, Molly is up to the challenge, and for weeks even before the King’s request she has been dreaming of a young man holding the very cup that Alaric seeks. With her friends Tobias and Winifred, as well as the less-friendly Lord Mayhew in tow, Molly makes her way to Austlind to her ill-fated grandfather’s old workshop to find a loving cup. Her journey takes her far beyond the borders of Austlind, all the way to the hidden city of Harrowsgode – a realm of power, knowledge and magic, where Molly will learn the truth of her family and her singular magical gifts. Trouble waits in the secret city, however, and it will take every bit of Molly’s considerable skill and fire to break free, save her friends, and bring her king the treasure he so desperately desires.

When I read and reviewed The Silver Bowl, two major points made the book such a success (to me): first, the wonderful nostalgic, old-school quality to the story and Diane Stanley’s writing style; second, the refreshing fire and ignorance of heroine Molly. Both awesome high points still hold true in The Cup and the Crown, which is, in my opinion, an even better book than its predecessor.

A veteran writer of novels, biography and history books, as well as picture books, Diane Stanley is an author whose skill and polish is obvious with every word on the page. To me, The Cup and the Crown feels very much like the work of Shannon Hale, particularly the Bayern books – there’s the same sense of tension, power, and self-discovery, transmuted through sweet, fresh prose. In many current YA fantasy novels (current as in published in the last five years or so), there’s a trend of huge page counts, protracted storylines and tortured romances that span three or more books. In contrast, I love that, like The Silver Bowl, The Cup and the Crown is certainly a book in a trilogy but can be read as a self-contained adventure. There’s an economy of words and a confidence in the characters and pacing of this book that is both refreshing and effortless – it can be so frustrating to slog through a door-stopper that is entirely unnecessary to the arc of a series and feels entirely written to fulfill a book deal/make moar moneys – and I wholeheartedly appreciate Stanley’s even hand.

The Cup and the Crown also shares the same wonderful characters of the first book, as we are re-acquainted with the brilliant Molly and steadfast Tobias, just as we meet a new cast of characters and learn more about Molly’s mysterious grandfather and his people. I loved Molly so much in The Silver Bowl because of how genuine she came across as a character. Unlike the trend seen in many heroines in the fantasy realm (even those born to slavery or poverty), Molly is utterly unrefined and uneducated. She can neither read nor write (neither can Tobias, for the record), and she is no lady – but don’t confuse that with stupidity, because Molly is as sharp as they come. While she has no education or training, Molly gets by on her quick wits and gumption, though in this book she is forced (literally forced) to study and learn how to use her gifts. This includes the magical ability she has been so terrified of for her entire life – as Molly tells her newfound cousin, to possess magical ability in Westria is to be reviled and proclaimed a witch; to possess those same gifts in Harrowsgode is to become powerful beyond compare. I loved Tobias in this book, too, as he grapples with his unrequited emotions for Molly, and watches her slip further and further away from him. It’s angsty and heartbreaking, but in a genuinely good way (and I’m not giving up on Molly and Tobias!).

Now, while the writing is superb and the characters heartfelt and real, the real crux of The Cup and the Crown, and the presence behind the conflict of this book, is the city of Harrowsgode itself. We are introduced to an entirely new, hidden land in this second book, that holds its secrets close, and its people even closer. As Molly and her friends soon discover, Molly is no ordinary descendant of Harrowsgode, and those in control of the quiet, closed-off city will do anything to harness her powers. In this book we get answers – answers as to why Molly’s grandfather appeared in Westria so suddenly with his magic-working talents, as well as answers as to Molly’s own blood and power. More importantly, The Cup and the Crown sets vital, frightening acts in motion. Molly does something at the end of this book that has incredible, unforeseen consequences. This, the book’s ending, and the promise that Alaric will use the loving cup all make for an intriguing – if slightly terrifying – setup for the third and final book in this trilogy. Molly’s use of magic in this book, and the promise that the King will use another magical object to basically TRICK and BEWITCH a woman into falling in love with him against her will for the good of a kingdom is a desperate, despicable measure – I’m very, very interested to see how this plays out. Will it be romanticized, or revealed as the horrific, agency-depriving thing that it is? Only time will tell – I cannot wait to see what happens next.

If you haven’t read this series yet, I highly recommend it – especially for fans of old-school ’80s and ’90s YA fantasy. Bring it on, The Princess of Cortova.

Notable Quotes/Parts: You can read the first 70 pages of The Cup and the Crown online HERE.

Reading Next: A Spear of Summer Grass by Deanna Raybourn

At Kirkus: Railsea by China Miéville