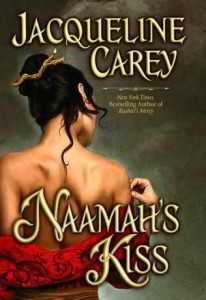 Stand alone or series: Book one of a new series set in the same world as the Kushiel’s Legacy books, though following a completely new heroine. Naamah’s Kiss stands on its own, but fans of the two prior trilogies will feel at home with Ms. Carey’s new series.

How did I get the book: An ARC from Gollancz

Summary: (from amazon.com)
Once there were great magicians born to the Maghuin Dhonn; the folk of the Brown Bear, the oldest tribe in Alba. But generations ago, the greatest of them all broke a sacred oath sworn in the name of all his people. Now, only small gifts remain to them. Through her lineage, Moirin possesses such gifts – the ability to summon the twilight and conceal herself, and the skill to coax plants to grow.

Moirin has a secret, too. From childhood onward, she senses the presence of unfamiliar gods in her life; the bright lady, and the man with a seedling cupped in his palm. Raised in the wilderness by her reclusive mother, it isn’t until she comes of age that Moirin learns how illustrious, if mixed, her heritage is. The great granddaughter of Alais the Wise, child of the Maghuin Donn, and a cousin of the Cruarch of Alba, Moirin learns her father was a D’Angeline priest dedicated to serving Naamah, goddess of desire.

After Moirin undergoes the rites of adulthood, she finds divine acceptance…on the condition that she fulfill an unknown destiny that lies somewhere beyond the ocean. Or perhaps oceans. Beyond Terre d’Ange where she finds her father, in the far reaches of distant Ch’in, Moirin’s skills are a true gift when facing the vengeful plans of an ambitious mage, a noble warrior princess desperate to save her father’s throne, and the spirit of a celestial dragon.

First things first. I guess I should start by explaining why reading this book is a Feat of Strength. A few months ago Thea dared me to read Kushiel’s Dart, a book set in the same world as Naamah’s Kiss and one of Thea’s most favourite books ever. Although I liked the writing and enjoyed the political side of the story, for most part I felt deeply disturbed because the heroine of that book was an anguisette (almost a sort of religious calling), someone who takes pleasure from pain. I just didn’t feel comfortable at all with that aspect of the story which I realised had more to do with me as a reader, than with me, as a reviewer. So, I was scared to face another book set in the same world, in Terre D’ange where people live by the motto “Love as Thou art Wilt”. Another thing that makes this a Feat of Strength is the pressure I feel to like the book, because not only do I want to share this with Thea but also with the rest of the world: the reviews for Naamah’s Kiss have been overwhelmingly positive.

I open Naamah’s Kiss and encounter the heroine and narrator Moirin as she grows up in Alba across the sea from Terre D’ange. She is a child of two worlds: daughter of one of the few remaining Maghuin Dhonn, one of the peoples from Alba and a D’Angeline priest. Moirin is touched by both cultures, having small gifts of magic from her mother and Naamah’s touch (that would be a Goddess of Desire) from her father. She spends her childhood living in the woods with her mother, never knowing her father. When she reaches a certain age, she is tested by the Maghuin Dhonn, and the great bear -goddess shows her that her future lies in Terre D’ange where she needs to find her Destiny.

It is in search of this Destiny that Moirin leaves everything she has ever known behind and embarks on a journey , falling in love and in lust on the way, meeting pivotal people (including her father), always following her diadh-anam, the spark of spirit within. She travels from Alba, to Terre D’ange and then to lands faraway to save a princess under a curse, always and forever listening to her diadh-anam.

This is an extremely difficult review to write. I am never more aware of the separation between being a reader and being a reviewer than when I read a Jacqueline Carey novel. Usually both are intrinsically connected but my reaction to Naamah’s Kiss (as my reaction to Kushiel’s Dart) is as conflicted as it can be.

I don’t think anyone could deny that the writing is lovely, the world building impressive, the overall story interesting, compelling and far-reaching in scope. I absolutely loved the first part of the book, set in Alba and the last part of the book set in Ch’in. Both worlds are imbued with magic and history and stories that were exquisite. It is the middle part, when Moirin is in Terre D’ange that I couldn’t bring myself to like. And I came to the conclusion that I simply can not stand Terre D’ange and the D’Angelines. It seems to be all that they do with their time is to scheme and to have sex. Seeing as how Moirin is sort of out of the loop when it came to scheming, all that was left to her was to have sex. In all fairness, it is not exactly like this, but it sure felt like it. There were endless sex scenes (as hot as they might be and hell, can Jacqueline Carey write sex scenes) between her and her lovers (three whilst in Terre D’ange) and it was plain.boring.

Plus, the “Love as Thou Art Wilt”, is a lovely concept, amazing in theory but when it comes to the practical side, it is when I wonder. Because Moirin suffers losses. Terrible loss, a person she loved when she was a kid, her friend and first lover, for example. But how could I possibly grieve with her when she is already falling in love with the next person? How can I miss a character when Moirin seems not to be missing them at all. She may say she is , but I just don’t see it. How she finds comfort in sex is understandable , if only it didn’t happen continuously. The whole lifestyle of the D’Angelines seems so indiscriminate. It makes me wonder: when everybody is special, then no one is? It is important to note another thing: I am fully aware than I am coming from my own comfort zone of reading Romance with strictly monogamous relationships.

I also can’t help but to compare Naamah’s Kiss to Kushiel’s Dart seeing as it is set in the same world. Even though I wasn’t crazy about the first one, I actually missed the more political aspects of that novel and all the intrigue that made it fascinating to me even tough I was disturbed by the sexual side of the story. Reading Naamah’s Kiss where Moirin does not have the pride and duty of a D’Angeline and the need to make sacrifices in the name of her Country , makes it less of a grand story. In fact, Moirin’s story is a very private one, everything that she does is in the name of her own spark of goddess-life. And I KNOW, that this sounds crazy coming from me, who am always asking for simpler stories based on character development, but I wished that there was more to the story that Moirin’s search for her Destiny and her answers to Naamah’s calls, which seems to be more reactions than actions. This is part of why I am so conflicted as well.

In the end, it is at a more personal level, the emotional connection with the story that may vary from reader to reader, that I seem to be out of the loop. Because to me, as a reader, this connection is missing when I read Carey’s books even though the reviewer in me, says, “hey this is a good book, what the hell are you on about?”.

Notable Quotes/ Parts: I really enjoyed the first chapters of the novel when Moirin was still in Alba.

Verdict: Objectively speaking, Naamah’s Kiss is a wonderful book that I simply did not connect with.

Rating: I am going to go with the same thing said when I read Kushiel’s Dart: 7, because it is well written and the world that the author created was believable and complex. No more than 7 because my level of enjoyment varied from chapter to chapter.