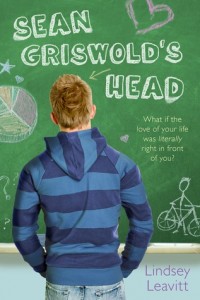 According to her guidance counselor, fifteen-year-old Payton Gritas needs a focus object-an item to concentrate her emotions on. It’s supposed to be something inanimate, but Payton decides to use the thing she stares at during class: Sean Griswold’s head. They’ve been linked since third grade (Griswold-Gritas-it’s an alphabetical order thing), but she’s never really known him.

The focus object is intended to help Payton deal with her father’s newly diagnosed multiple sclerosis. And it’s working. With the help of her boy-crazy best friend Jac, Payton starts stalking-er, focusing on-Sean Griswold . . . all of him! He’s cute, he shares her Seinfeld obsession (nobody else gets it!) and he may have a secret or two of his own.

Why did I read this book: I am crazy in love with Contemporary YA right now and this one looked like an Ana-book. I got it after the positive reviews started piling up.

It seems that I am at a place right now where whenever I find myself in a reading slump all I have to do to get out of it is to read a Contemporary YA novel. I reached a slump last week and then decided to finally read Sean Griswold’s Head and you know what? It worked beautifully as it was exactly what I was looking (and hoping) for: a good, solid read.

Payton Gritas has just found out, by accident, that her father has been diagnosed with Multiple Sclerosis. She is scared, confused and hurt by the fact that she is the last one to know as her entire family has known about this for the past 6 months. Because of her reaction to the news, her parents insist that she sees a counsellor at school who suggests a Focus exercise to help her get through this. In order to keep her mind off her family’s problems, she needs to find something else to focus on, keeping a journal about it. She decides on an unlikely focus subject: Sean Griswold’s head. Sean is the guy who sits in front of her in most of her classes and little by little, she realises that even though she has known Sean for years, she doesn’t really know him at all. As the weeks go by, Payton finds herself growing increasingly attached to Sean (and his head) as the two become friends and that helps her come to terms with the difficult situation at home.

Sean Griswold’s Head is a great book, with just the right balance of funny and sad moments. Starting with the latter, Multiple Sclerosis is a serious disease and the author never shies away from this truth. This is indeed one of the most important aspects of the novel but not its entire focus and thankfully, the story is less about the disease itself (avoiding the danger of cold info-dumping) and more about how it affects everybody around it. Payton’s family life for example, is going to change. There are places they can no longer go, things they can no longer do as a family. There is an undeniable strain on her mother, her brothers and of course above all her father. Her description of her father, how active he is, his passion for basketball (which she shares), his work as a dentist come with this underlying questioning that no one dares to voice: how will he be able to continue being like that when the disease starts to affect him more and more? It comes as no surprise that the most heartbreaking moment in this novel is when Payton observes her father (unbeknownst to him) as he is shooting hoops and then loses control of his bladder. It is absolutely gut-wrenching for him and for her.

And Payton’s reaction to the news is what moves the plot forward. Her reaction is really, really bad: she stops talking to her parents, shuts herself off, has problems with her grades and studying and even quits basketball. She knows she is being cruel and unfair but she can’t help it, at least not to begin with. I found this to be such an understandable and believable reaction – she is one of the most relatable egotistical characters I have ever seen and her entire arc (from anger to acceptance) was really well done.

As for the other characters and storylines, they are what provide the lighter side of the story. Sean, for example is an absolutely delightful character in all of its beta-hero glory, he is just so…nice and understanding. He reminded me of some of my own male friends from high school, all of them good boys. His budding relationship with Payton, the progression from friends to something was so much fun, showing the pain, the awkwardness as well as all the excitement of falling in love for the first time. And I truly enjoyed how their connection came from biking and being really serious and driven about it. And then there was Jac, Payton’s best friend. Their relationship added another level of authenticity to the story. I believed in their friendship, I believed in their friendship as teenagers and I loved Jac and how she had no qualms or shame about her assertiveness when it came to boys.

Perhaps the greatest let down comes from the fact that even with all the authenticity of the characters, the denouement was perhaps too perfect, too tidy as Payton reached a level of understanding about everybody and about herself that seemed far too easy given the circumstances. And even though I can’t really say that Sean Griswold’s Head was particularly original or groundbreaking, that doesn’t really matter when the story is this good. Plus, extra brownie points for a great sport-related storyline and awesome Seinfeld references. Serenity now.

Notable Quotes/ Parts: OK so this scene happens when Payton and Sean are off biking and Payton overdoes and is huffing and puffing and I found the whole scene hilarious:

Sean is beside me now, forcing me to drink some water before he pours more onto my face and hair. He zips off his jacket and balls into a pillow, which I gratefully lie on. Next, he lifts my legs and massages my calves.

Horror- I didn’t shave my legs today. Did I yesterday? It’s winter! I should be safe from male contact. I spend my whole adolescence shaving compulsively and one of the few times I forget is when the action happens. But this isn’t action. Is it?

He doesn’t seem to notice the prickly hair; his attention is on the knotted muscles. Up and down his hands slide. Heat rises in my face and it’s not from biking. This is the closest I’ve been with a boy, but the vomited water next to me nixes any romantic ideas.