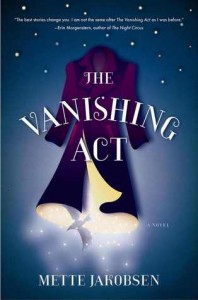 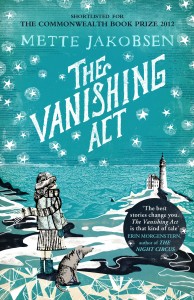 “The best stories change you. I am not the same after The Vanishing Act as I was before.” —Erin Morgenstern, author of The Night Circus

On a small snow-covered island-so tiny that it can’t be found on any map-lives twelve-year-old Minou, her philosopher Papa (a descendent of Descartes), Boxman the magician, and a clever dog called No-Name. A year earlier Minou’s mother left the house wearing her best shoes and carrying a large black umbrella. She never returned.

One morning Minou finds a dead boy washed up on the beach. Her father decides to lay him in the room that once belonged to her mother. Can her mother’s disappearance be explained by the boy? Will Boxman be able to help find her? Minou, unwilling to accept her mother’s death, attempts to find the truth through Descartes’ philosophy. Over the course of her investigation Minou will discover the truth about loss and love, a truth that The Vanishing Act conveys in a voice that is uniquely enchanting.

Why did I read this book: We’ve received a review copy of this one and I was taken with the cover and the premise – simple as that.

“Philosophers step back and look at the big picture.”
“That is not what Mama does.”
“No,” Papa agreed.
“She says the tiniest brush stroke matters.”
“But sometimes, my girl, when you look in such detail, you lose the big picture.”

Minou lives on a tiny isolated (and nameless) island alongside her wannabe philosopher-fisherman Papa, the heartbroken magician Boxman, the pretzel-making Priest and the dog No-Name. Only one person is missing: Minou’s Mama, who disappeared one year earlier after she left the house for a walk wearing her best shoes. Everybody thinks Mama is dead but Minou believes she will be back soon.

One day the body of a young boy washes up the shore and Papa decides to bring the body inside their house where it will wait for the supplies boat, three days away. Her father thinks the boy will help him – finally – to find the Absolute Truth. Minou thinks the dead boy can explain her mother’s absence if only she can put together all the memories and all the clues leading up to that fateful day.

The Vanishing Act is one of those books there are really hard to pin down. Perhaps the best metaphor would be “smoke and mirrors”: the poetic prose and the engaging philosophical core disguising an extremely common-place plot with stereotypical characters.

At first glance, it seems a magical little story about a girl’s coming-of-age as she comes to terms with her mother’s disappearance. The prose is beautiful, clear and often disguises a poignancy surrounding the lives of the adults within the story that the narrator – being a young, green girl – can’t quite grasp but which is painfully clear to the reader. It is quite easy to infer for example, that her father’s nightmares about “hiding in a cellar” through “the war”, hints at him being a WWII survivor. The author also skilfully presents the remoteness and the sense of isolation of its setting.

The story unfolds slowly as Minou relives her memories of her mother and the moments that have shaped her life so far. As such, we see how she has always thought herself to be just like her father whom she often sided with: a logical truth-searcher. But in reality she is also just like her Mama: an imaginative, creative artiste. Perhaps the best aspect about The Vanishing Act is exactly the fact that Minou embodies a combination of traits that dismantle the false dichotomy that you can only be a logical thinker OR a creative soul but not both. As such, Papa is portrayed as quite the sad figure – trying so hard to explain what happened to him during the war by attempting to go at it via an extremely logical route, believing that scholars’ ideas are unquestionable.

The book loses much of its appeal when we look at its small details though. These are very hard to avoid in the very controlled, small environment of the novel. There is a clear attempt to present these characters and their lives as perhaps “universal” truths in themselves or at least that’s how one could interpret the fact that none of the characters apart from Minou have actual names or personalities. As such, the Priest doesn’t do much beyond “Priestly” things and “Boxman” is a mysterious magician whose allure proved to be too much for Mama. This brings me to the biggest problem I had with the novel – which is Mama’s portrayal as a quirky bunch of stereotypes that Lead to Her Death.

Beware: we are about to enter slightly spoilery territory now.

Because of course Mama is a Mysteriously Exuberant Woman with her Bright Red Hair and her Creativity Soul. Even the story of how she arrived on the island reinforces this with her surprising arrival carrying a live peacock, wearing flowers on her hair and being object of Papa’s love at first sight. And of course, she is also the only soul that cannot bear the confinement of the island, who ends up having a run-of-the-mill affair with the man-next-door and who ends up obviously Tragically Dying because of her Anguished Sadness (her death either suicide or Dramatic Fall off a Cliff).

One could easily argue though that these aspects are portrayed as such because of Minou’s limited narrative as a young girl. But I did not feel that the text itself questioned this portrayal in any way. I also can’t help but to feel that we are perhaps to feel more sympathetic toward the father and his sadly pathetic life rather than the cheating Mama who dared going for a walk and never came back.

All of that said, The Vanishing Act is a charming fast read. I enjoyed reading it to a certain extent but do not, in any way, shape or form feel that my life has been altered for doing so (points at Dramatic Front Page Blurb).

I wondered if I could trust Descartes’ way of finding the truth if he had been an awful man. But then I reminded myself that logic could be held up against bad weather, and years without apples on the apple tree, and had nothing to do with either kindness or love.

Reading Next: Summer and Bird by Katherine Catmull