Decoding the Newbery is a monthly column in which Newbery Medal winners are examined and deconstructed by regular contributor and author Catherine Faris King. This month, Catherine reads The Hero and the Crown, the Newbery winner for 1985.

“The Hero’s Crown hold much of what Damar is; or at least much of what her king needs to hold his people together and free of mischief.” – The Hero and the Crown, pg. 73

I love fantasy. I love what magic brings to a story, to let the unreal illustrate what is most human. But not all fantasy is created equal. I come to The Hero and the Crown having not read any of the other books set in Damar, but having a healthy background in fantasy otherwise. 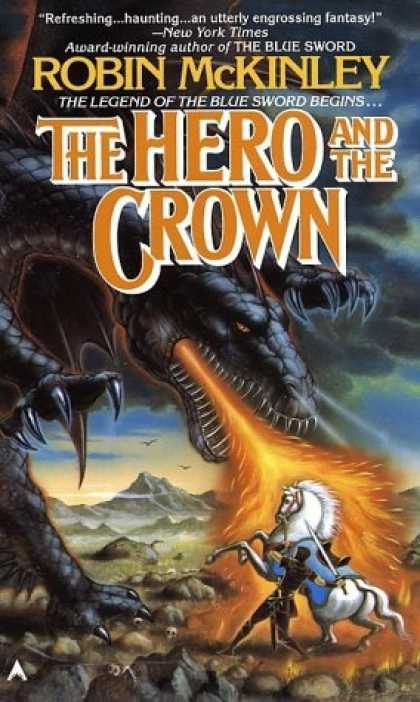 I’ve got a lot to say, but let’s do the Newbery Formula Breakdown before I start griping.

The Hero and the Crown is fairly unconventional according to the Newbery Formula. Our heroine, Aerin-sol, is at sixteen not exactly a kid hero, although she is sheltered and doesn’t think much of herself. People don’t treat her like a child; more like a nuisance. But they give her the requisite freedom she needs to wander into heroism. The Damar court is not exactly a small town, although the way McKinley describes it, it’s a closed-in community that feeds on its own gossip. So it provides a similar feeling, that is, a place where Aerin-sol does not really belong. (“Sol,” by the way, is Robin McKinley’s term for “the word ‘princess’ isn’t cool enough for me so I’m going to invent my own and it’s going to be a suffix for no good reason.”)

I don’t know why, but I could not really connect to the people as anything beyond stock characters, neither through action nor dialogue. Maybe that’s why I didn’t buy either of Aerin’s relationships with her Romantic Interests – one relationship is mostly pining and long glances from across a room, another is snippy banter that at some point resolves itself into acknowledged passionate love. Those are two very seaworthy kinds of “ship” (to borrow a fandom phase), but neither one sails without that moment of connection, of understanding why these two work for one another as romantic partners. And I did not get that connection. I’m tempted to blame the prose – more on that later.

The book’s real catalysts are the magical incursions from the North. The workings of an evil sorcerer are inviting war, and ancient, malevolent dragons awaken from slumber. The Magical Mentor is a straight example, and a fairly literal one, at that – his name is Luthe, he is an immortal sorcerer, and is a latecomer to the plot.

An important character dies quite late in the book – a casualty of war, treated quite matter-of-factly. Still, it qualifies as a Death By Newbery Medal because it cements Aerin’s transition to adulthood.

Aerin is desperate to prove herself a worthy daughter of the royal line, and her young efforts strike her down, catastrophically. She poisons herself unintentionally with surat-leaf, and nearly dies of burns after fighting the terrible dragon Maur. Both instances require a long convalescence and a slow recovery – in the fine tradition of Tolkien. I liked that. I liked McKinley’s refusal to brush off the lingering effects of battles with dragons – and battles with despair.

I also liked the plotline dealing with Aerin’s Animal Friend. In her great pain, Aerin reaches out to someone who is also suffering, and helps them. This someone is her father’s retired and injured warhorse, Talat. He becomes Aerin’s clever and loyal steed through the battles ahead. Aerin’s work taking care of him becomes the book’s Hands-On Activity (there’s also something about rediscovering an ointment to resist fire, but the horse is more interesting).

McKinley lavishes details upon Talat, and Aerin’s care of him. This is one of the strongest choices she made as a writer. In less careful fantasy, horses are plot-expedient machines who need no maintenance except maybe now and then a little food. If your “standard” princess must be sweet and good to animals in order to be likable, Aerin’s thorough and unglamorous recuperation of Talat is worth a thousand duets with cute woodland creatures.

There’s a good story here, and plenty of strong, archetypal images – the sorcerer waiting unchanging in his hall while the seasons turn; the valiant knight who brings springtime to a winter-blasted land; the serene lake of magic. I just didn’t connect to the characters… and I didn’t like the writing.

I’ve never finished a Robin McKinley novel before, although I have tried. The Hero and the Crown suffers from an overabundance of exposition – and not even very good exposition.

The novel begins on the verge of a great battle, and then, without ceremony or designation, dives into a flashback for the first half, to show how we got here. We spend years in flashback.

The sentences pile on top of one another with no grace at all – like this clunker: “Galanna and Perlith’s wedding was the first great state event since the celebration of Tor’s coming to manhood, and thus his taking his full place at his uncle’s right hand, less than two years after his own father died” (McKinley 40).

Maybe it’s not that bad by itself. But imagine paragraphs of sentences all like that, packed together one after another. It’s a terrible reading experience. And the worst of it is, it’s boring. What do I care about the Damar court? There are dragons! And demons! I’ve read other fantasy that dabbled in court politics while ignoring the far more interesting magical threat at the border, and it can be pulled off, but most of the time I feel like I’m being cheated out of something.

And if there’s going to be magic – you need to set up the magic. Even if the writer is just dabbling in magical realism, they need to set up whatever it is that sets their world apart. They ought to set it up early and clearly in proportion to how important it is to the story.

But here? McKinley has no setup. What magic is there is, aside from the vague magical Gift enjoyed by the royal family, is either introduced very late, or never explained clearly enough. For instance, the idea that there is a demon army beyond the Northern border. Are those really “demons,” as in, malign and inhuman spirits? Because in context, that could just as easily be an army of human soldiers who have some propaganda paving the way before them. But, no, the magic is there, apparently, although we never actually learn that much about what the demons are and why they’re working for our Evil Overlord du Jour. And the Lake of Dreams annoyed me particularly. There had been no indication of geographic magic anywhere in the book up to that point. What does the Lake of Dreams do? It does what the story needs. How magical!

No, I did not like The Hero and the Crown. I appreciate the book’s good qualities, and I know Robin McKinley has many fans, but I am not one of them. Give me the wholesome nobility of Alexander’s Prydain, cheesy though it may be, or the grounded humanism of Pierce’s Emelan or Tortall. The Eighties were a weird decade, and I’m happy to leave them behind and go onto the Nineties.

You may well ask What’s Next, because the Nineties’ roster of Newbery winners has many beloved favorites, from Holes to Number the Stars, to the well-remembered honorees The True Confessions of Charlotte Doyle and The Ear, the Eye, and the Arm. However, when it came to picking one work to stand for that decade and its anxieties, the choice was obvious. 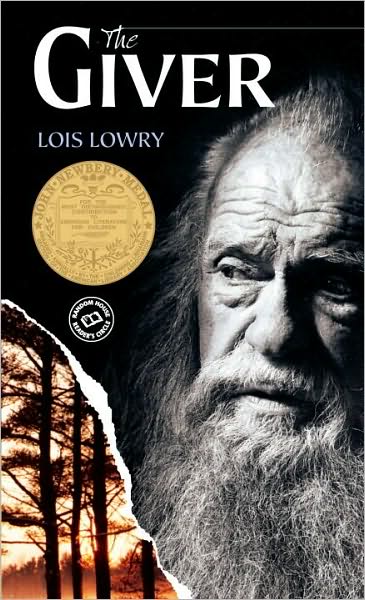 I’ve foreshadowed it here time and again. It crosses genre expectations, it uses fantastical devices to speak to the heart of human experience, and it has aged marvelously well. Tune in this December when I take a new look at Lois Lowry’s Newbery winner for 1994, The Giver.