This month’s daree is Abigail from the blog All Things Urban Fantasy . A few weeks ago she wrote a post about her favourite feature from other bloggers (well worth checking, by the way) and wouldn’t you know…our very own Guest Dare was one of them. It was too good an opportunity to pass, and dare her we did. Upon learning about her Sci-Fi phobia, we dared her to read the Sci Fi novel Stardoc. 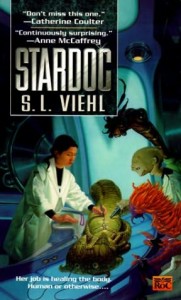 Dr. Cherijo Grey Veil leaves Earth and accepts a position as a physician at Kevarzanga-2’s FreeClinic. Her surgical skills are desperately needed on a hostile frontier world with over 200 sentient species–and her understanding of alien physiology is nothing short of miraculous. But the truth behind her expertise is a secret which, if discovered, could have disastrous consequences between human and alien relations…

Why did we RECOMMEND this book: Thea read and really enjoyed Stardoc. It is in fact, one of our first reviews ever (#11, back when we counted our reviews)

I think I’ve read two—count them two—science fiction novels in my entire life: Ender’s Game by Orson Scott Card which my older brother relentlessly bullied me into trying (yes, it was good) and The Host by Stephenie Meyer because it was touted as science fiction for people who don’t like science fiction (again, it was good). But despite actually liking those two and really liking Sci-Fi TV and movies, I’ve avoided this genre in books like I avoid taking showers with my hairdryer. Enter the nefarious duo known as Ana and Thea aka The Book Smugglers.

They pounced on my Sci-Fi phobia and gave me a list of Sci-Fi books to choose from for this Guest Dare including Stardoc by S. L. Viehl. I’d read all of Viehl’s romances written under the name Gena Hale (think classic Linda Howard) and was told there was some romance in Stardoc so I thought it would be the least painful. Sadly I think this will be my first and last Viehl book.

Nearly the first half of Stardoc was everything I was dreading about reading science fiction: unpronounceable names, complicated technical jargon, endless pages describing alien life forms and other world topography. My eyes started crossing by the third chapter and I knew I was in for a long, and painful read. I may have been overly pessimistic at that point, because the second half was significantly better.

The story follows young Dr. Cherijo Grey Veil as she seizes an opportunity to escape her controlling father by fleeing to the planet Kevarzanga Two (K-2) where humans are the minority and hundreds of different alien species have migrated. Despite having no experience treating nonhumaniods, she accepts a position at the FreeClinic and quickly makes enemies with several of her new neighbors and colleagues. Yet, through determination and a big plot development, she becomes instrumental in battling a threat that could potentially end all life on K-2.

Because science fiction is often so bizarre and complicated, emotional depth and character connections often take a backseat to world building. his is definitely true in Stardoc. There was so much attention given to describing, for example, nurse T’Nliqinara, a massive preying mantis type alien, or the extensive Colonial Charter rules. And of course all the little annoying substitutions like ‘rotation’ instead of ‘day’. The only character I really empathized with, at least initially, was Alunthri, a Chakara (a giant, talking alien kitty cat) who is kept as a slave/pet by one of Cherijo’s neighbors.

Despite my admitted prejudice for this genre, and those shortcoming particular to Stardoc, it was an almost completely Sci-Fi free scene that bothered me the most. I’ll try to be as spoiler free as possible here and just say that a character is essentially abducted by another character and raped. The victim is very clear throughout the assault that this in not consensual by pleading and begging the attacker to “Stop it!” and “You can’t, [name]. Don’t do this.” And yet, the author writes the betrayal of the victim’s own body halfway through the assault and shows the victim actually taking pleasure from it: “Small sounds of shock and involuntary pleasure spilled from my lips.” The rape scene is fairly graphic and goes on for several pages. I just can’t stomach the notion that somehow the victim really wanted to be raped and ultimately enjoyed it on a primal level. The victim called it rape during and after and I wish the author hadn’t tried to muddy the issue.

The halfway point, after the majority of the would building had been established, the main plot kicked in (think alien Outbreak) and the promised romance developed for Cherijo. The story moved along quickly and finally created some curiosity on my part as to how it would all end (not exactly a cliffhanger, but abruptly enough that I downloaded a sample of the next Stardoc novel to my Kindle). If your Sci-Fi phobic like me, Stardoc probably isn’t going to win you over to the genre. The best parts are like Grey’s Anatomy meets Star Trek, but there is a lot of heavy lifting to be done to get to those parts. I’ll probably venture out into this genre again in the future because I can see the appeal of the total otherness of these stories, but it won’t be with this series.

Thank you Abigail, and we are sorry the book didn’t work for you!

Next on the Guest Dare: We take a break from daring others and go back to daring EACH OTHER! Ana dares Thea to read a contemporary YA novel (probably a Jaclyn Moriarty one) and Thea dares Ana to read a Scifi novel (probably Ender’s Game) .

IT IS THE CLASH OF THE SMUGGLERS FOLKS! Stay tuned.