“It’s still our world down there, Dr. Nelson,” she said, “but that’s like saying that the ice ten thousand feet beneath the arctic icepack is, too. Yeah, it is, but not anything we know. Our government has spent thirty trillion dollars on space exploration, and less than 1 percent of that to explore the world underneath us right now. But it’s just as unknown. You’ll be entering another world, really and truly.” 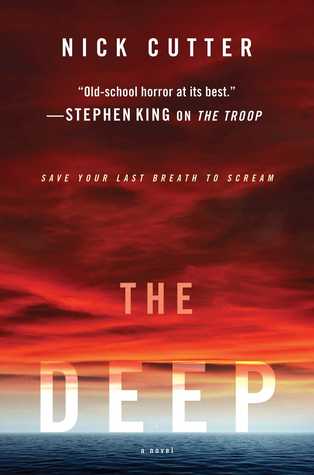 From the acclaimed author of The Troop—which Stephen King raved “scared the hell out of me and I couldn’t put it down.…old-school horror at its best”—comes this utterly terrifying novel where The Abyss meets The Shining.

A strange plague called the ’Gets is decimating humanity on a global scale. It causes people to forget—small things at first, like where they left their keys…then the not-so-small things like how to drive, or the letters of the alphabet. Then their bodies forget how to function involuntarily…and there is no cure. But now, far below the surface of the Pacific Ocean, deep in the Marianas Trench, an heretofore unknown substance hailed as “ambrosia” has been discovered—a universal healer, from initial reports. It may just be the key to a universal cure. In order to study this phenomenon, a special research lab, the Trieste, has been built eight miles under the sea’s surface. But now the station is incommunicado, and it’s up to a brave few to descend through the lightless fathoms in hopes of unraveling the mysteries lurking at those crushing depths…and perhaps to encounter an evil blacker than anything one could possibly imagine.

Why did I read this book: I enjoyed The Troop, Nick Cutter’s first book. So, when a copy of this new horror novel arrived in my mailbox, I was intrigued.

The ocean can be a cruel and unforgiving place.

Miles beneath the surface, compounded by thousands of pounds of pressure threatening to instantly turn one into human pate, The Deep begins its saga. It is the future, and the world is ravaged by a pandemic simply called “the ‘Gets.” It starts with little things: a woman forgets her pin number, or an appointment, or some innocuous thing. Then it becomes more dramatic: that same woman forgets her address, or how to drive. And then it becomes fatal: in the last few days and hours of the ‘Gets, an infected person simply forgets how all involuntary actions work. She forgets how to blink, to breathe, to beat her own heart. And the infected die. No one knows how the ‘Gets started or is spread, but it is decimating the human population and no cure is in sight.

That is, there’s no cure in sight until one of the world’s most brilliant scientists, Clayton Nelson, makes an impossible discovery from the ocean’s depths. A mysterious substance called Ambrosia is found – a miracle substance of unknown origin that protects its host from death itself. In a multimillion dollar Hail Mary play for the future of the species, the US government builds an underwater habitat, the Trieste, at the bottom of the Mariana Trench’s deepest rift (8 miles underwater) and send three different scientists to find, harvest, and experiment on this Ambrosia.

Except… well, these types of schemes never go according to plan.

One doctor resurfaces dead, his body a bloated, scarred, impossible horror show – with incomprehensible bloody writing on the wall of his high-pressure submarine. The other two scientists are unreachable via radio – but the last message from Clayton Nelson implores the surface world to find and bring his younger brother, Luke, down to the Trieste.

So down Luke, the protagonist of The Deep, goes. Down into the frigidly cold depths of darkest, unexplored sea. Down into a claustrophobic metal spider of a habitat protects its frail human and animal cargo from the immense pressure of the world outside. Down into a nightmare where the truth of Ambrosia, its origins, and its purpose are revealed.

The second novel from Nick Cutter, The Deep – if you’ll forgive a terrible pun – treads familiar water. Like The Troop, this second novel is a tale of horror, also of the Enclosed Space variety. Granted, the setting and atmosphere for The Deep is a million times more frightening and effective than The Troop‘s island. In fact, the most powerful thing about The Deep is its claustrophobic setting. Set miles beneath the surface of the ocean, the descent into the aptly named Trieste (I presume for the Spanish, “sorrow” or “sadness”) is a taxing ordeal that requires incredible skill and patience from a naval expert with nerves of steel. The Trieste itself is alone at the bottom of the ocean, on a flat, eerie surface onto which dead life falls in sea snow; where light itself is alien; where a microfracture results in instantaneous Human Pate. (Hey, at least it will be painless, right?)

The Trieste is the perfect embodiment of The Impossible Place Where Humans Should Never Even Dream of Going – it’s malevolent and frightening and wrong in the way of other great vessels and habitats that have strayed too far from the realms of human life. Think Event Horizon, but instead of the cold vacuum of space, the Trieste is in the deepest, darkest bowels of the earth. The same sort of interdimensional Utimate Evil reigns supreme, though – an insidiousness worse than one could imagine or comprehend lurks in these depths, ancient and cruel and calculating. Cutter does a beautiful job of building up the tension of this entity within the Trieste‘s warped walls – there literally is no escape, and a plethora of dangers await.

The horror here is manipulative and psychological – there are flashbacks aplenty – but also squishy and squicky of the Body Horror persuasion, in the same vein as The Troop. In The Deep, however, the insatiable, transformative substance is called Ambrosia as opposed to teeming heaps of wriggling, slithery worms, though. Still, the horror it inflicts on its victims is beautifully, violently disgusting – tentacle mutation hands, bodies covered with scars from self-inflicted scalpel wounds, decompression bubbles that turn a person into a lumpy pile of jelly, human bodies transformed into killer-honeybee-birthing-pustules, unspeakable things falling out of dog anuses… you know, that sort of thing. Cutter relishes in this type of gory detail, so if you’re not strong of stomach or you don’t like this sort of horror, you probably won’t be a huge fan of The Deep. (Personally, I’m all for it, especially when written well. Cutter does it very, very well.)

So, The Deep gives you the creeps (in a good way). The squishy body horror and atmospheric horror are wielded with gleeful skill by Nick Cutter – that said, there are issues with The Deep and its writing style that prevent it from being truly great horror. First, there’s the overall superfluousness of “the ‘Gets” overall. The pandemic that is supposed to serve as a catalyst for mankind (ok, not really, American-kind, because the rest of the world is relying on the USA according to an offhanded conversation early on) to turn its eyes to the sea is really kind of throwaway. Why introduce a pandemic at all when it actually has no impact on the story and is questionable as a catalyst for exploration and scientific endeavor? I don’t know. It’s not a large point, but it’s a little frustrating from a closure standpoint – especially since such a to-do is made of the ‘Gets in the book description.

Beyond that continuity issue, which could fairly be ignored by a reader, there are three other problems I have with The Deep. First, the novel is written and packaged very much like a traditional Patterson-esque thriller, moreso than it is a horror novel. Composed of short, choppy chapters with very generous leading on each page, The Deep is a book that reads easily and quickly, but the format also makes the book feel somewhat dissatisfying. (How much cooler, for the claustrophobia of this novel to be reflected in tighter, cramped format, for example?) This directly leads to the other two problems with The Deep: its clunky transitions, and its lack of…well, depth. With regard to transitions, The Deep is a novel that relies heavily on flashbacks – a character will be looking at something that reminds him of that time when he was a kid and…

…The next chapter starts with the character reliving that memory! (Usually preceded by ellipses leading into the chapter break.) This isn’t confusing; rather, it’s annoying. The actual meaning of these memories, particularly of Luke’s horrific childhood with his “destroyed” father and monster of a mother, is tied into the novel overall by book’s end nicely. It’s the execution of these memories that grates.

Finally, the most important criticism concerning The Deep is its superficiality. The novel, like The Troop before it, plays within established genre tropes and basic paint-by-numbers characterizations – but it doesn’t challenge those archetypes or aspire to originality or greatness. While Cutter pulls off the suboceanic setting beautifully, he apes Crichton (Sphere) and King (The Shining), but doesn’t have the same blend of technicality and ease as the former, or the brazen, outlandish imagination and raw emotional character resonance as the latter. Luke is a sort of mediocre character – a mild man with a horrific childhood, a frustrated relationship with his brilliant brother, a failed marriage, a lost child, a love for animals, etc. Yet, for all of the facts we learn about Luke, there is an absence of emotional connection with the character. The same can be said for Al (short for Alice), our other protagonist (sort of). Heck, the most tangible and relatable characters of the bunch were LB (the ill-fated Labrador), and Clay (the brilliant, inhuman mad scientist). When the big reveal is made at the end of the book – regarding Ambrosia’s origins and its purpose – it’s fairly predictable and underwhelming. Nothing new here, folks, you know the drill.

That doesn’t mean it’s a bad book, or a bad ending. Overall The Deep is actually quite good; an effective horror yarn, well-versed in atmospheric tension and a good dose of mutation-style gore.

It’s not great, though. But I have hope for Nick Cutter – maybe his next book will do the trick.

Rating: 6 – Good, leaning slightly towards a 7.