It’s time for another Guest Dare – the November edition. For those new to the feature, our Guest Dare is a monthly endeavor in which we invite an unsuspecting victim to read a book totally outside of their comfort zone. You can read all previous Dare posts HERE.

This month’s victim is the fabulous Rhiannon Hart – prolific blogger and aspiring author of Young Adult fantasy. Rhiannon’s reading tastes run towards the Dystopian and Apocalyptic (sound familiar?), especially of the YA persuasion. When we contacted her for a guest dare, she came back with a laundry list of genres she’s uncomfortable towards, we (naturally) found a way to encompass multiple areas of discomfort in one book – a male protagonist, in a science fiction setting (minimal physics involved), with multiple war/thriller storylines. The book is The Warrior’s Apprentice by Lois McMaster Bujold, starring none other than the incomparable, indomitable Miles Vorkosigan.

Ladies and gents, please give it up for Rhiannon! 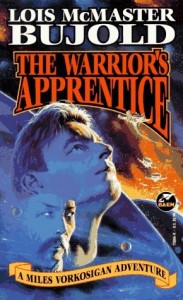 Stand alone or series: The first book to feature Miles Vorkosigan in the ongoing Vor series and the first book published in the series, though technically the fifth story in the series. (Think Star Wars Episodes I-III versus IV-VI – The Warrior’s Apprentice is starting at episode IV)

Why did we recommend this book: After discovering this series last year, Miles Vorkosigan has become one of Thea’s favorite protagonists. And when Rhiannon mentioned her aversion to scifi, male protagonists and war/espionage thrillers, we knew immediately that Miles and his shenanigans would be able to win her over. Thus, we recommended The Warrior’s Apprentice!

Summary: (from amazon.com)
Between the seemingly impossible tasks of living up to his warrior-father’s legend and surmounting his own physical limitations, Miles Vorkosigan faces some truly daunting challenges.

Shortly after his arrival on Beta Colony, Miles unexpectedly finds himself the owner of an obsolete freighter and in more debt than he ever thought possible. Propelled by his manic “forward momentum,” the ever-inventive Miles creates a new identity for himself as the commander of his own mercenary fleet to obtain a lucrative cargo; a shipment of weapons destined for a dangerous warzone.

Miles Vorkosigan has eleven generations of proud warriors preceding him, all weighing heavily on his stunted, fragile frame. His attempt to qualify for the Barrayaran Military Service Academy and follow in his illustrious family’s footsteps fails when he breaks both legs on an obstacle course. At a loss for what to do with himself now he’ll never become an officer, he turns his attention to Elena, the beautiful daughter of his bodyguard, Sergent Bothari, to help her found out the truth about her unknown mother. A chance meeting with a jump pilot about to have his ship scrapped on Beta colony sets in motion a series of events that sees Miles become the leader of a private, imaginary army, and embroiled in a war against the Oserans.

From the very beginning of this novel I was fascinated by Miles. He’s the perfect combination of audacity, wit, ego and fragility. On a planet where defects are barely tolerated, Miles’s physical imperfection makes him even more determined to prove himself, especially to his father. His catchphrase “forward momentum” is an apt one, and combined with an overwhelming desire to help the underdog (who he is prone to identify with) he becomes embroiled in all manner of sticky situations. Outward he is austere and commanding; in private he is fraught with worry and prone to tears. I don’t know whether I want to clasp him motheringly to my breast or tongue pash him.

I was relieved at how character-driven the narrative was. I’m not a sci-fi aficionado despite all the speculative fiction I read. I get a bit lost in deep space. I really like to know how things look and where they sit in relation to one another. The problem with space is it’s mostly empty (funny that) and I can’t get a proper handle on where things are. All the worm-holing and planet-hopping that went on had me a bit baffled, and see now why it may have been a good idea to read the two preceding books in this sequence, if only to learn more about Beta and Barrayar, what they look like and where they sit in relation to Earth. While I had a hard time visualising things, the social aspects and interplanetary relations were well fleshed out. I loved the contrast between the prudish and sheltered Barrayarans and the liberal Betans. Cordelia, Miles’s mother, is from Beta and also the protagonist of the first two novels, and her exasperation with Barrayarans his highly amusing.

Overall, this is a very funny book. I had a huge grin plastered on my face the whole time I was reading it and frequently laughed out loud. Bujold is a true wit. It’s also very touching, exciting and believable. Bujold doesn’t try to tie things up too neatly. Characters with a sordid past are neither demonised nor exonerated. They just are. I will definitely be picking up the other books in this series and picking up more sci-fi in general. I think a lot of teenagers would get pleasure out of books like these, but no one seems to writing them for a mass audience at the moment. Perhaps I should try! I’ve heard whispers that after the wave of dystopian novels that is about to submerge us up to our necks in end-of-the-world scenarios (hurrah!) sci-fi will be the next big thing. I better start researching rocket fuel and air-locks.

Thanks for having me, Smugglers! This was a fantastic dare, and maybe the start of a beautiful friendship between me and deep space sci-fi.

There you have it, folks! Rhiannon is converted to the wonder that is science fiction and the awesomeness that is Miles Vorkosigan! Thanks again to Rhiannon for being a good sport, and for the fabulous review!

Next on the Guest Dare: We are actually letting you off the hook next month, as Smugglivus will be in full swing – but don’t fret! The Guest Dare will be back, with a vengeance, come 2010. If anyone is down for a challenge, feel free to email us or leave a comment here! We are always hungry for a new victim…