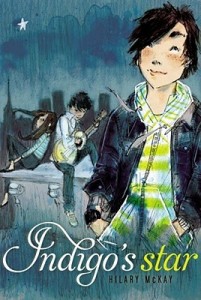 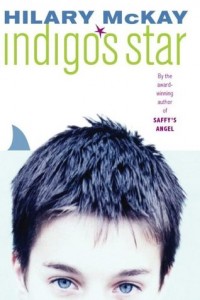 It’s back to school for the start of a new term, and the eccentric Cassons are up to their old tricks!

Indigo, having just recovered from a bout of mononucleosis, must return to school after missing an entire semester. Only his younger sister and loyal sidekick, Rose, knows why he’s dreading it so much. As it turns out, the school bullies are eagerly awaiting Indigo’s return so that they can pick up where they left off—flushing his head in the toilet. But Indigo hasn’t counted on meeting Tom, an American student who is staying with his grandmother in England for the year. With his couldn’t-care-less attitude and rock-and-roll lifestyle, Tom becomes Indigo’s ally, and together they work to take back the school.

Meanwhile, eight-year-old Rose is desperately trying to avoid wearing horrible glasses, nineteen-year-old Caddy is agonizing over her many suitors, Saffy is working overtime with her best friend, Sarah, to protect Indigo from the gang, and with their father, Bill, in London at his art studio, their mother, Eve, is just trying to stay on top of it all!

In this hilarious, heartwarming companion to her award-winning Saffy’s Angel, Hilary McKay shows us a new side of the Cassons and reminds us that nothing is stronger than the bonds of family

Stand alone or series: It’s the second book in the Casson Family series but can be read as a stand alone

How did I get this book: The Other Ana kindly gave me a copy of the book.

Why did I read this book: Because I absolutely adored the first book in the series: my review of Saffy’s Angel HERE.

Indigo’s Star is the second book in the Casson family series and is more of a companion novel than a proper sequel to Saffy’s Angel – although it could be read as stand-alone but to do so would deprive you of the delights of that first book. Believe me: you don’t want that to happen.

This particular entry focuses on Indigo, the sole boy in the family as he is about to go back to school after a long illness. It soon emerges that before getting ill, Indigo was being bullied at school. Only his youngest sister (Permanent) Rose knows what happens and they are both understandably anxious about his returning to school. But there is a new student, Tom-from- America, who gets the unwanted attention away from Indigo. Ultimately, the two become friends with a little help from Rose.

I say that the novel “focus on Indigo” but this is not quite correct as it has become clear to me that this is an ensemble series. As such, as Indigo and Tom become fast friends, the entire Casson family share the stoplight too. Caddy, now in college is still entangled with former driving instructor Michael but keeps coming back home with potential new boyfriends (ore are they?); Saffron and her best friend Sarah organise to take care of both Indigo and Rose; as the latter is desperately trying to get their (increasingly absent) father’s attention.

Back when I reviewed Saffy’s Angel I said how that book had made me think of the way that literature can engage meaningfully and smartly with difficult topics. Here, there is bullying (as well as complicity and silence), absent-minded parenting as well as absent-for-real parenting, divorce and moving on and how these affect children. As an adult it is so easy to forget how seemingly simple things can torment children and this book reminded me of that by portraying this in a very compassionate way.

The book is also interspersed with the most hilarious letters from Rose to Bill. They provide her own version of everything that is happening in their lives but with her choosing to stress or reinforce the elements she feels will scare Bill into coming back home:

So flames went all up the kitchen wall. Saffron called the fire brigade and the police came too to see if it was a trick and the police woman said to Saffron Here You Are Again because of when I got lost having my glasses checked. But I was with Tom whose grandmother is a witch on top of the highest place in town.
Love, Rose.”

In the relationship between Rose and her father is where I think, Indigo’s Star is at the height of its cleverness-meets-heartfelt: because of course, Rose’s letters are an indirect plea for help that are often sadly ignored by Bill. Until he comes through at Rose’s greatest time of need –in that very moment, Rose understands her father completely and sees both the good and the bad in him. It is a very special and powerful moment in the story when she fully sees Bill and understands he quite possibly will never truly understand her. Which is heartbreaking in itself but all the more so when Rose is clearly the more artistic child of the family, something that she could truly share with her artist father but can’t.

Speaking of artistic tendencies, it is awesome to see how art, emotion and family intertwine here. This is true when it comes to Tom and Indigo playing the guitar and how music connects them both; or how Eve becomes more engaged with their community; and especially how Rose paints the picture of her family on the kitchen wall and as the story progresses, so do the painting with new additions like Sarah and Tom and with Bill always on the outskirts.

This idea of a fluid family that embraces new members as they come along is the core of these books with the understanding that blood ties are important but so are the ties of friendship and true understanding and bonding:

“There are all sorts of families,” Tom’s grandmother had remarked, and over the following few weeks Tom became part of the Casson family, as Micheal and Sarah and Derek-from-the-camp had done before him.

He immediately discovered that being a member of the family was very different from being a welcome friend. If you were a Casson family member, for example, and Eve drifted in from the shed asking, “Food? Any ideas? Or shall we not bother?” then you either joined in the search of the kitchen cupboards or counted the money in the housekeeping jam jar and calculated how many pizzas you could afford. Also, if you were a family member you took care of Rose, helped with homework (Saffron and Sarah were very strict about homework), unloaded the washing machine, learned to fold up Sarah’s wheelchair, hunted for car keys, and kept up the hopeful theory that in the event of a crisis Bill Casson would disengage himself from his artistic life in London and rush home to help.”

Finally, I also love how there are no strict gender roles here, how all the members of the family have interests that are not dependent on their gender and how they are all equally protective, emotive and active participants on the Casson comfort machine.

Indigo’s Star is funny, moving and thoughtful featuring amazingly subtle, complex and clever writing. This is becoming one of the best Middle Grade series I have ever read.

Some of my favourites:

“all her anger towards her father had gone. He would never really understand her. He still talked of the possibility of scrubbing her picture off the kitchen wall. He had drifted away from them all into another life, with hardly a backward glance. Still, he had come home when she asked him to and he had brought Tom the black guitar. He was good and he was bad. “

“Rose had the sort of eyes that manage perfectly well with things close by, but entirely blur out things far away. Because of this even the brightest stars had only appeared as silvery smudges in the darkness. In all her life, Rose had never properly seen a star.

Tonight there was a sky full.

Rose looked up, and it was like walking into a dark room and someone switching on the universe.” ”