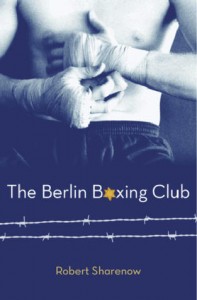 Fourteen-year-old Karl Stern has never thought of himself as a Jew. But to the bullies at his school in Naziera Berlin, it doesn’t matter that Karl has never set foot in a synagogue or that his family doesn’t practice religion. Demoralized by relentless attacks on a heritage he doesn’t accept as his own, Karl longs to prove his worth to everyone around him.

So when Max Schmeling, champion boxer and German national hero, makes a deal with Karl’s father to give Karl boxing lessons, Karl sees it as the perfect chance to reinvent himself. A skilled cartoonist, Karl has never had an interest in boxing, but as Max becomes the mentor Karl never had, Karl soon finds both his boxing skills and his art flourishing.

But when Nazi violence against Jews escalates, Karl must take on a new role: protector of his family. Karl longs to ask his new mentor for help, but with Max’s fame growing, he is forced to associate with Hitler and other Nazi elites, leaving Karl to wonder where his hero’s sympathies truly lie. Can Karl balance his dream of boxing greatness with his obligation to keep his family out of harm’s way?

Why did I read this book: I have been in the mood for a good historical, and as a boxing fan, I couldn’t pass The Berlin Boxing Club up. (Not to mention, this book has been received to broad and emphatic acclaim!)

Karl Stern is an artist, an older brother, a dreamer, and a Jew. In 1935 Berlin, Karl’s Jewishness is a curse, especially since his family is not religious, and he does not feel connection with his heritage in any way. As a blonde, fair-featured teen, he can even pass for Aryan – at least Karl thinks he’s evaded suspicion until he’s cornered by the “Wolf Pack” (a group of Nazi Youth members at Karl’s school) who decide to mete out punishment on the Juden boy. Karl takes a cruel beating, and though bruised and bloodied he rushes to help his father at the family art gallery for a the latest opening, knowing how dire the family’s monetary situation is. At the gala, an extraordinary thing happens, as Karl stands in shock when Max Schmeling, German boxing heavyweight hero, walks into his father’s gallery – and somehow knows Karl’s father. Even more astounding is the fact that Karl catches Max’s eye, and in return for a painting, the legendary boxer offers to give Karl lessons at his training club. What boy – especially a skinny, beat-up boy like Karl – could resist?

As Karl begins his rigorous training routine at the Berlin Boxing Club with his hero, the world seems to deteriorate around him. His school becomes increasingly hostile towards the few Jewish gentiles enrolled. The Nazi Youth gradually begin to take over the school, assimilating even his close friends. And, as Germany comes to a critical point with the passing of the Nuremburg Laws and poised on the precipice of calamitous change, Karl must use his newfound strength and decide who, and what, to believe in.

Based on the devastating days leading up to the brutal devastation of Krystallnact, The Berlin Boxing Club is a beautiful, harrowing beast of a novel. A sports book, a coming of age story, and a historical recounting of the early days leading to one of the greatest atrocities in human history, Mr. Sharenow’s historical fiction novel told through the eyes of young Karl Stern is an incisive, powerful read. Based on the events in Germany from the early to mid 1930s and centered with the figure of Max Schmelling, The Berlin Boxing Club is both historically accurate and manages to be emotionally resonant without being emotionally exploitative – and in a novel dealing with the events leading up to the Holocaust, this is no small feat.

Even more importantly, The Berlin Boxing Club is never preachy nor didactic – its protagonist, Karl, is conflicted and openly admits, repeatedly, how he would have loved to join the Nazi Youth, how he feels rage and exclusion when his friends start to wear the uniform and how much he just wishes he could simply join in the movement. He despairs that his younger sister and father look traditionally Jewish with dark curly hair, hooked noses, and large lips. In this sense, I loved that Mr. Sharenow never takes the easy way out and lets his protagonist off the hook. Instead of Karl turning into a champion for his fellow Jewish classmates and the weak, Karl only gradually comes to the realization that his hero Max might not be perfect. I loved the tension and internal conflict that Karl faces at each turn in the novel – from his own fervent and conflicted desires to distance himself from his Jewish birthright, with his frustrations with his pacifist father and depressed mother, to his gradual disenchantment with his boxing hero. In fact, ALL of the characters in The Berlin Boxing Club are fantastically detailed and conflicted. Among my favorites are Karl’s family (his father, mother, and younger sister), as well as Karl’s stuttering cornerman from the boxing club, with the big heart and the keen eye. Of course, there’s also Max Schmeling himself, and I think Mr. Sharenow does an admirable job of humanizing a larger than life character that never joined the Nazi party – but never stood actively against it, either.

And on top of all the writing accolades in terms of character and plot, The Berlin Boxing Club is also a love letter to the sweet science and the greats that fought in the ring in the 1930s, just as it is an illustrated novel with an Al Jaffe-esque flair. As a boxing fan, I still don’t know too much about the sport in its earlier days and it was fascinating to learn about the great Jewish boxers in America of the late 19th and early 20th centuries. I loved the training sequences that Karl would engage in, the fights he finally gets to fight, his hopes and struggles and dreams. In short, I loved this book.

Powerful without being exploitative, never descending into triteness or slipping into emotional manipulative territory, The Berlin Boxing Club is one hell of a novel. Absolutely recommended, and one of my favorite, notable reads of the year.

Notable Quotes/Parts: Thanks to Harper Teen’s Browse Inside feature, you can read a good preview of the novel HERE or by using the widget below:

Book Review: In A Handful of Dust by Mindy McGinnis