This Wednesday, Thea tackles a Vivian Vande Velde book that just qualifies for the OSW criteria–Deadly Pink, originally published in 2012. 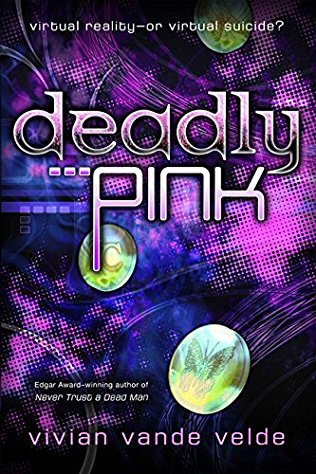 Grace Pizzelli is the average one, nothing like her brilliant older sister, Emily, who works for Rasmussem, creators of the world’s best virtual reality games. The games aren’t real, though—or at least they weren’t. Now Emily has hidden herself inside a pink and sparkly game meant for little girls. No one knows why, or how to convince her to come back out, and the technology can’t keep her safe for much longer. Grace may consider herself average, but she’s the only one who can save Emily. So Grace enters the game, hoping to talk her sister out of virtual suicide before time runs out. Otherwise Emily will die—for real.

For her entire life, Grace Pizzelli has always known that she is second to her sister, Emily. Older, prettier, smarter, popular, Emily. Grace doesn’t hold this against her older sister–she loves Emily, and accepts that Grace will always just be the “sensible” sister (as compared to Emily’s brilliance).

But one afternoon, Grace is yanked out of her high school classroom to learn that something has gone wrong with her brilliant older sister. Emily, now a college freshman and intern at a prestigious VR gaming company, has gone into a game… And won’t leave it. After many have tried and failed to convince her to leave the game, the only person Emily might just listen to is Grace. It is up to this younger sister to enter the game, beat it, and save the day.

I wasn’t sure what I was getting when I picked up Deadly Pink–I had read Vande Velde’s much-beloved Heir Apparent years ago, and assumed this would be more of the same girl-gamer-heroine romp in a VR setting. This is true of Deadly Pink–but it’s also kind of misleading. See, Deadly Pink is–superficially–a story about a sister on a quest in a horrendously pink, frilly, aimed-at-tween-girls game in which butterflies and flowers must be caught for coins, beribboned silk dresses are a way of life, and unicorns and sprites abound. Grace, who (of course) rolls her eyes at this garish display of girlish frivolity, cannot even begin to understand why her sister would have chosen this game to disappear into. (Grace, our heroine, isn’t really my favorite if you couldn’t tell.)

What this fails to demonstrate, however, is that Deadly Pink is actually a story about depression, the pressure of expectation, and attempted suicide. At least, those are the actual substantive issues that occur, even if they aren’t examined at all, by the text.

Over the course of her adventures, Grace tricks and outwits wish-granting sprites, gold-bearing dragons, and the ethnically stereotyped game Master/AI (referred to throughout as a gypsy, who delights in driving a bad bargain with Grace and Emily). She learns truths about her sister and herself, and completed her quest. What Velde doesn’t even attempt to unpack, however, is any deeper meaning to Emily’s suicide attempt and Grace’s intervention. The book treats everything like a level in the game in which the Pizelli sisters are entrapped: superficial and glittery, and not worth looking at too closely. It’s disappointing in its failure to examine these issues at best, disturbing and damaging in its blasé treatment of Emily’s pain and reductive resolution at the end of the book, at worst.

Is Deadly Pink a bad book? No. It’s a quick read, complete with high stakes and adventure and a snarky–if completely clueless–heroine, whose heart is in the right place. Deadly Pink‘s intentions are good, and Velde likes to keep things quick and loose in her writing; I just wish there was a little more nuance and attention to the serious issue at the heart of the conflict.

Rating: 5 – Readable and not bad, but recommended with major reservations