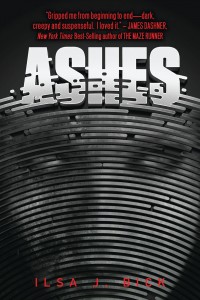 Alex has run away and is hiking through the wilderness with her dead parents’ ashes, about to say goodbye to the life she no longer wants to live. But then the world suddenly changes. An electromagnetic pulse sweeps through the sky zapping every electronic device and killing the vast majority of adults. For those spared, it’s a question of who can be trusted and who has changed… Everyone still alive has turned – some for the better (those who acquired a superhuman sense) while others for the worse (those who acquired a taste for human flesh). Desperate to find out what happened and to avoid the zombies that are on the hunt, Alex meets up with Tom – an Army veteran who escaped one war only to find something worse at home – and Ellie, a young girl whose grandfather was killed by the electromagnetic pulse. This improvised family will have to use every ounce of courage they have just to find food, shelter, while fighting off the ‘Changed’ and those desperate to stay alive. A tense and involving adventure with shocks and sudden plot twists that will keep teen and adult readers gripped.

Why did I read this book: I loved Ms. Bick’s novel Draw the Dark and was very excited to see that she would be taking a stab at the apocalypse, zombie(ish) style. Even with my skepticism concerning the premise of the book, I was very excited to nab a copy at BEA this year.

On a picturesque fall day, the world ends.

Not with a bang or a whimper, but with a high-intensity electromagnetic pulse (EMP). Before civilization disintegrated by detonation, Alex was a girl on her last legs. In the terminal stages of her inoperable brain tumor, Alex decides to leave her Aunt and the slew of ineffectual “treatments” behind, and heads for the Michigan wilderness. With her father’s glock, some survival supplies, and her parents’ ashes, Alex enjoys the quiet peace of the woods – until an inexplicable thing (the EMP) causes her to pass out, writhing in agony. When she awakens, Alex’s sense of smell has returned, stronger than ever – she’s able to sense the sour-milk smell of fear from a young girl, the feral smell of a terrified dog, and the rancid meat smell of those who are changed. While the EMP has killed a number of people (such as those with pacemakers and of frail health), it seems that some people – teens – have been altered by the pulse, turned into ravenous, crazed zombie-like monsters. Running out of food and water and lost in the wilderness, Alex and her unlikely companions, the eight year old Ellie (whose grandfather was killed during the initial burst), Ellie’s protective dog Mina, and twenty-some year old army soldier on leave Tom must make their way to find help and life in a changed world. Faced with the threat of winter and starvation, the vicious horror of those changed by the EMP, and fellow humans who will do anything in order to survive, Alex and her new family fight to stay together and beat the odds.

The first novel in a planned trilogy, Ashes is an action-packed, gritty take on the apocalypse. Ilsa Bick has an exceptional gift for storytelling and plotting as seen in her 2010 novel Draw the Dark, and Ashes expertly builds tension and horror as the pages fly by – no small feat, considering there is a huge shift in plot about halfway through the novel. In effect, Ashes actually feels like two books in one (don’t worry, I won’t spoil the details for you or reveal the particulars as to how the plot breaks…just know it’s there). Both halves (the first a survival story in the woods, battling through the initial chaos and unknown; the second a confrontation between other inevitable survivors) are equally well-written and compelling, however, this type of split focus is bound to leave some readers torn. Personally, I liked the change in direction – what’s an apocalypse novel without a religious cult or two? – encompassing not only the chaos in the immediate afterglow of the apocalypse event, but how humans react and reestablish some semblance of civilization in the aftermath.

Beyond the plot’s structural shift, there are many things to love about Ashes. The general atmosphere of dread and relentless horror, and overall fast novel pacing were wonderfully executed as Ms. Bick takes a world that changes from normal to insane in the blink of an eye. The action sequences are excellent, as are the hardships of living in the woods with encroaching winter threatening to kill our protagonists. Of course, the big draw in apocalypse novels beyond the action lies with the characters. I’m a little torn when it comes to the cast of Ashes. On the one hand, these characters all seem to subscribe to the infuriatingly stupid school of reactions and apocalypse training, which pisses me off to no end. BUT, the very nature of their infuriating decisions and reactions show serious character integrity – it’s understandable, even realistic, that these characters would act in such ways. Ellie, for example, is a huge, selfish, whiny brat with a tendency to do the worst possible things in every scenario (including eating the dwindling food supplies because she’s selfishly hungry, or taking the only gun and dropping it conveniently in the river…little things like that) – but she’s also an eight year old girl that has lost her family and has been left to fend for herself. Her sullenness and anger are understandable and in fact perfectly drawn for her character. In contrast, protagonist Alex is perhaps a bit too understanding of Ellie’s flaws, but overall a genuine character with serious heart and grit. Going from losing both of her parents as a child to developing terminal cancer can do a number on a girl, but Alex never falls into self-pity or victim territory. She’s a young woman that has been through some very terrible things, but has come to terms with everything on her own. Alex’s strength in the face of fear, her dedication to Ellie, Mina, Tom, and other characters later in the book are admirable in the extreme. Tom, a soldier on leave from his tour in Afghanistan, is an interesting character as well, with shades of trauma and darkness, revealed gradually over the novel. As with Ms. Bick’s earlier YA horror novel, Draw the Dark, much of Ashes strength in terms of characters is with how genuine they feel and resonate, psychologically and emotionally, and this is especially true for Tom and Alex.

Praises said, there were some sizable issues with Ashes that prevented me from fully loving the book with complete abandon. First, (and perhaps this is a mild spoiler, so look away if you don’t want to know) one of my biggest pet peeves in mystery/thriller fiction is the Painfully Transparent Mystery (i.e. everyone knows the solution to the mystery/the killer’s identity/the who-done-it traitor, but in order to build “tension” and keep the plot chugging along, the protagonist is ridiculously, mind-numbingly clueless).[1. See Richelle Mead’s Vampire Academy or Succubus books for prime examples of this incredibly irritating plot device.] In this case, the frustration stems from the fact that Alex does not realize that OMG she has electrically charged NANITES in her head that weren’t working to kill her tumor before, but after the EMP all of a sudden she can smell, taste, recall lost memories. One would hope that a heroine would be able to connect the dots between those two events and possibly prescribe some of her miracle recovered brain function to the tiny robots living in her cranium.

Beyond that annoyance, there are also two significant plausibility issues that disrupted my reading experience. There’s the premise of the apocalypse and zombification of young adults blamed on “EMPs” (note the plural), which, frankly, is one of the silliest explanations I have ever seen.[2. Seriously, it’s right up there with “rage infected monkeys.”] That said, a silly premise does not necessarily preclude a good story, and I’m happy to say that such is the case with Ashes. I was able to ignore some of the hand-wavey scientific explanations and copious amounts of applied phlebotinum without too much trouble and continue to immerse myself in the story. The more important credibility gap, in my mind, was Alex’s survival prowess. For a girl that had supposedly lost her memories of her parents, somehow she remembers everything about survival as taught by her father; gun handling, fire starting, rare herbs and edible roots, etc. She repeats many times that she learned all this from her father as a child – but given that we know her father died when she was just a kid, and given her memory loss of all things related to her parents by way of tumor, it’s tough to swallow.[3. Yes, she does recall many of these things after her tumor is “zapped” by “the EMPs” (it is hard to type that with a straight-face), but the fact that she has all of the survival goods with her in the first place – jello mix for raw energy, fancy tinder/flinty stuff for firestarting, a big ol’ glock 9mm – implies that she knew everything before going out into the wilderness on her soul-searchy, John Locke style walkabout. Just sayin’.] Again, I’m willing to overlook these details for the greater story, but it’s still an issue that warrants mention.

These gaps aside – and I know I’m being harsh, but only because the writing and story overall are so strong – I truly enjoyed Ashes. Ending on a high note and a frightening (albeit not too shocking for the discerning audience) revelation, I cannot wait for the next book in this trilogy. Once again, Ms. Bick proves herself as a formidable storyteller with a gift for complex characters, and I am very excited to see where Shadows takes Alex and her friends next.

Notable Quotes/Parts: No excerpt up, but you can check out the cool Ashes dedicated website with some extras HERE.

Reading Next: The Girl of Fire and Thorns by Rae Carson