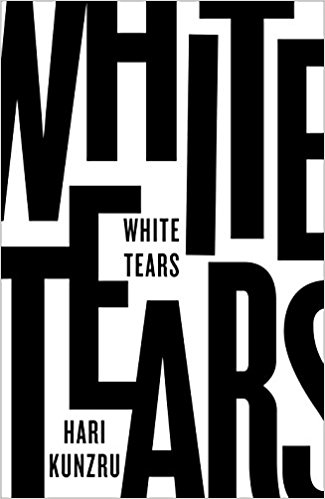 Two twenty-something New Yorkers. Seth is awkward and shy. Carter is the glamorous heir to one of America’s great fortunes. They have one thing in common: an obsession with music. Seth is desperate to reach for the future. Carter is slipping back into the past. When Seth accidentally records an unknown singer in a park, Carter sends it out over the Internet, claiming it’s a long lost 1920s blues recording by a musician called Charlie Shaw. When an old collector contacts them to say that their fake record and their fake bluesman are actually real, the two young white men, accompanied by Carter’s troubled sister Leonie, spiral down into the heart of the nation’s darkness, encountering a suppressed history of greed, envy, revenge, and exploitation.

I’ve been sitting on this review for weeks, mulling over my conflicted feelings about White Tears. It’s a really thought-provoking, engaging book: a terrifying ghost story, a revenge fantasy, that attempts an extremely timely exploration of race in America and a look at the ails of cultural appropriation.

It’s the latter two that I am not so sure about because I am not completely certain the author took the story to the place where it could – should? – have been.

Two young white dudes become best friends in college over their shared love for music. Most specifically, the type of old Blues created by black creators – the type that nowadays exist only in prized, expensive collections. Carter is the Rich One, the one that collects records and has an idealised look of history, music and above all, blackness. Carter is White Privilege impersonated. Seth has a love for tech, for recording sounds – one of his hobbies is to walk around experimenting with his tech creations, capturing sounds made by unsuspecting people (i.e. a creepy stalker). We are primed by the story to loathe Seth and Carter – they are both creeps hiding as regular “cool guys” white dudes.

Seth – by way of his brilliant creations – is somehow able to capture sounds of the past. It is one of those that ends up the catalytic for what happens next. A remarkable song is recorded in passing, its author a black man he happened to overhear singing in the park, a song with lyrics so powerful that Seth and Carter decide to tweak it to appear “authentic” and release online under the name of Charlie Shaw. They are contacted by an old collector who say that their fake record is real, that Charlie Shaw existed and that he had been looking for the B side for years. And years.

And that’s when things start to get out of control: first Carter is beat to a coma and Seth is expelled from their apartment and loses all of his equipment. Aided by Carter’s troubled sister Leonie, Seth feels he needs to “make things right”.

But this story has a B side. Like all B sides, we know it exists from the moment the story starts playing. Seth’s narrative points to recurring paranormal phenomena that more or less prepares the reader for when the B side is played. From that moment onward, the story becomes an utterly terrifying, time-slipping ghost story in which the present seamlessly morphs with the past and Seth experiences in his own skin the memories and life of the real Charlie Shaw. Charlie is a black man and his is a difficult, tragic, unfair life in the Jim Crow South. The story spirals frenetically from here, with Seth losing his footing in reality and it all eventually reach a gory climax – as Charlie finds his revenge on the very people who wronged him.

And here is where my conflicted feelings find harbour: the moment when the story becomes a deeply personal story of experience racism as opposed to a story that truly examines racism on a systemic level. When we learn that the things that happened to Carter and his family are not random, that his family’s has a history of not only cultural appropriation but of exploitation of black labour and of black lives for over a century and are directly responsible for what happened to Charlie, it ended up removing some of the power the story could have had for me. To me it would have been more powerful, more relevant if the terrible things that happened to Seth and Carter were utterly unfair and random, just because of their race. But I guess even in this, white privilege wins (perhaps that’s exactly the point).

On the other hand, history is experienced by people on a personal level. It doesn’t matter that what happens to Charlie is the result of systemic racism because for Charlie what happens to him, happens to him. It is personal and perhaps removing this element would detract from his narrative, his story, his history. I still can’t help but to feel that by doing so, by making the story so attached to a very specific family of Very Evil white people, the book is somehow letting history down?

I said I had complicated feelings.

Also, complicated – and by complicated, I mean terrible – is the lack of women representation in the story. Although the story is from Seth’s limited viewpoint narrative and it has been established that Seth is not a good guy, it still matters that women are non-existent or end up dead (and their death used a catalyst for Seth to slip further into Charlie’s story).

The book goes far into exploring cultural appropriation, white privilege and systemic racism via a terrifying ghost story. I am just not entirely convinced that it went far enough.