First it was Kmont with Summer of Night. Then, Kate with The Sandman: Preludes and Nocturnes. Now, it’s The Happily Ever After’s Christine turn to…read a straight Dark Fantasy novel. We dared her to read…..

Title: Across the Nightingale Floor – The Tales of the Otori book 1 (out of 5) 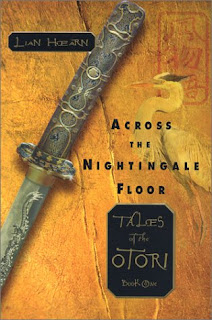 Summary:In his black-walled fortress at Inuyama, the murderous warlord, lida Sadamu, surveys his famous nightingale floor. Constructed with exquisite skill, it sings at the tread of each human foot. No assassin can cross it unheard. Brought up in a remote mountain village among the Hidden, a reclusive and spiritual people, Takeo has learned only the ways of peace. Why, then, does he possess the deadly skills that make him so valuable to the sinister Tribe? These supernatural powers will lead him to his violent destiny within the walls of Inuyama – and to an impossible longing for a girl who can never be his. His journey is one of revenge and treachery, honour and loyalty, beauty and magic, and the passion of first love.

Why did we RECOMMEND this book: This is one of Thea’s favorite series, set in Feudal Japan.

And so, without any further ado, we present you with this month’s Guest Dare, and turn the stage over to CHRISTINE!

Across the Nightingale Floor is book one in the original trilogy of the Tales of the Otori by Lian Hearn. This trilogy is an historical fantasy based in the fictional world of The Three Countries and is reminiscent of feudal Japan. Within The Three Countries, there is severe unrest among the various clans as the aggressive and controlling Tohan Clan is using cruelty and violence to achieve dominance and power over the entire land. Among the people of The Three Countries, there also exists the people The Tribe. The Tribe is a secretive group made up of several clans whose people posses varying degrees of mystical powers that have for the most part been lost to the world. The Tribe are frequently hired as spies and assassins throughout the land. Their mystical powers consist of those such as incredible stealth, speed, power, invisibility and acute hearing. Two of the largest clans within The Tribe are the Kikuta and the Muto; the Kikuta being the fiercest and possibly most powerfully skilled clan.

Across the Nightingale Floor is the story of a young man named Otori Takeo who was born under the name Tomasu and raised by his mother and stepfather in the village of Mino among fellow members of a secret religion called The Hidden. The Hidden are a peaceful and non violent people who are persecuted for their religious beliefs by those who dominate the land in numbers, wealth, and power and worship ‘the Enlightened One.’ While Tomasu is in the forest foraging for mushrooms, the powerful and cruel warlord of the Tohan clan, Iida Sadamu, pillages Tomasu’s village of Mino and burns it to the ground. Tomasu rushes to his village only to discover he is the sole survivor and in his rage insults and attacks Iida Sadamu. Tomasu runs from the soldiers to the forest where he literally bumps into a stranger who saves his life. The stranger is Lord Otori Shigeru, the widely loved and respected member and heir of the Otori Clan who renames and adopts the young boy as Lord Otori Takeo. While under the care of Lord Shigeru, Takeo is trained by Shigeru and his trusted friends Ichiro and Muto Kenji, who is of the Muto Clan of The Tribe. The men train Takeo in art, fighting, and self discipline. As it turns out, Takeo’s biological father was Kikuta Isamu, the talented assassin of the secretive Kikuta Clan of The Tribe and now Takeo finds himself torn between allegiances to The Hidden, The Otori and The Tribe.

Loyal first and foremost to his adoptive father, Lord Otori Shigeru, Takeo becomes instrumental in the unspoken plan to assassin Iida Sadamu for the purposes of personal revenge and in order to establish peace among the waring clans. In order to do this, however, Takeo must hone his innate Kikuta skills in order to cross the nightingale floor–a floor created with floorboards that ‘sing’ as they are stepped upon– to Iida Sadamu’s bedside undetected. As Takeo undergoes training and awaits for the opportunity to carry out the assassination, he struggles with his sense of personal identity, and also falls in love with Shirakawa Kaede, the young girl arranged to be married to Shigeru.

Across the Nightingale Floor is a novel of less than three hundred pages, yet is a story of epic proportions as it encompasses the complications of war, power, loyalty, betrayal, revenge, true love and the duty of marriage as the lives of numerous individuals are intertwined through blood and or obligation. Ms. Lian Hearn has an amazing talent to not only bring her characters to life, but also the culture and landscape. The emotions and visuals are so vivid, that I truly felt swept away and submerged into the world of Across The Nightingale Floor.

Most of the story is told from the first person point of view of Takeo, but some of the story is also told from the third person as we follow the life of Shirakawa Kaede who,unbeknownst to her, is an incredibly instrumental pawn in the conflict of this tale. I’ve never read a novel that switched perspectives like this in the same story, and I must admit that worked beautifully. The Tale of the Otori is clearly the story of Lord Otori Takeo, yet his story would not be complete without truly understanding the life and perspective of his true love, Lady Shirakawa Kaede.

Across The Nightingale Floor is saturated with incredible insights to humanity and spirituality. At times the human insights are disturbing and frustrating, and at other times the insights are hopeful and inspiring. The author has carefully and creatively interwoven spiritualness into the entire tale as the characters, primarily Takeo, question their fate and the weight of their actions on the world. The author is also adept at using metaphors from nature to symbolize Takeo’s take on the world as he struggles to understand his purpose and do what is right. Very beautifully written.

There is very little I can think of that did not work in this novel. At first, I was a bit challenged in keeping straight all of the Japanese-inspired names that were used for characters, clans, and places. I ended up having to flip back to earlier pages a few times, and then all of a sudden I was able to keep all the names straight and the rest of the reading flowed very smoothly. I do think that a reference page of character names, clan names, and places within the novel would have been helpful.

Another element of this novel that did not sit perfectly with me was that Takeo and Kaede fell in love at first sight. While I can easily suspend my disbelief on the magical level, it is much more difficult to do so with human emotion. However, given the seductive and subtle nature of the fantasy or magic in this novel, where the author actually convinced me that the Kikuta are able to make time stand still, I believed in the love that blossomed between Takeo and Kaede when their gazes locked. It was as if time stood still as these two souls connected and nothing could ever change the intention of their hearts to never love another soul as long as they both lived or died. It was very beautiful, but I still hope that more emotional depth between Takeo and Kaede is developed in the other novels, as I want to be further convinced that their love is truly real and can withstand anything.

This was an excellent novel to challenge my typical genre choices. Across the Nightingale Floor is simple in nature and is easy to read, yet at the same time, complex. The premise, the world building, the characters, the dialogue, and the conflict resolution were all wonderfully developed and beautifully written. While the ending is not the classic kind of happily ever after I’ve come to love from romance, the conflict is resolved in a realistic way that has left me content. At the same time, the end of the novel brings tragedy to Takeo that can never be reversed and there is a overlying saddness that I fear will only be magnified in the novels that follow Across The Nightingale Floor. Of course, now I have to read the rest of the Tales of the Otori to find out how it all ends.

Note: Across the Nightingale Floor was published in 2002 and originally written as book one in a trilogy. There are now five novels in the Tales of the Otori series.

Next up for the Guest Dare: CJ from The Thrillionth Page does Sugar Daddy by Lisa Kleypas 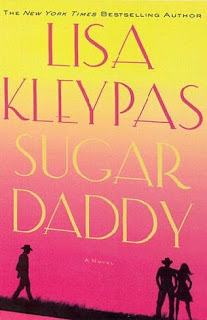 Thanks Christine, for the wonderful review and for being a good sport!