What She Said: The Waste Lands and Devil’s Kiss

Today we bring you the latest installment in our feature, “What She Said…” in which we both review books that the other has already read and reviewed. The idea arose because of the dilemma that if one of us reads and reviews a book, the other can’t really post again about it, right? WRONG! Hence, “What She Said…” was born. For those books that we REALLY want to read after the other has reviewed – and gushed – about it.

For today’s post, we take on The Waste Lands by Stephen King, and Devil’s Kiss by Sarwat Chadda. 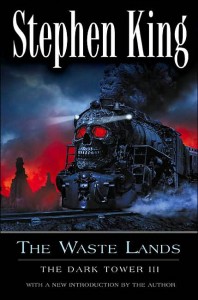 Original Review: Houston, we have a problem, for there is no original review (see below). I am totes cheating.

What Thea Said: Extract from an hyperactive email when she learnt I would be reading this book for the What She Said:

ALL THINGS SERVE THE BEAM! OMG Ana I am so happy you are reading these books! I am SO EXCITED. SERIOUSLY. Doing cartwheels in my room excited. DUDE. Can we do a readalong or something? Is that incredibly lame? Waste Lands is my favorite, though really the next three books (3-5) are made of awesome and are my favorites in a chunk.

So this is not really a What She Said because Thea has never reviewed any of the Dark Tower books, BUT she has talked about them at length in other reviews. Plus, the series is quite possibly her favourite series of all time. I have been reading them slowly (because Stephen King and I do not have a good author-reader relationship) but I am really enjoying it so far although I can’t really say I am head over heels in love with it – at least not yet.

The Waste Lands is the third book in The Dark Tower series which follows main character Roland of Gilead, the last Gunslinger in search of the elusive Dark Tower in a crumbling world “that has moved on.” The Waste Lands opens a few weeks after the AWESOME ending of The Drawing of Three when Roland is joined by two companions, Eddie and Susannah in his search for the Dark Tower. At the beginning of the book, they are attacked by a huge robotbear who turns out to be the guardian of one of the doors to other worlds (this being a multi-verse and all). Once they defeat the RobotBear they find of the Beams that hold the world together and they follow The Path of the Beam towards the Dark Tower.

Meanwhile, Roland is going crazy: his mind has been divided by a time paradox created when he saved the life of Jake Chambers at the end of book 2 thus preventing Jake from even coming to his world whilst also having the memory of meeting him and letting him die (in book 1). Meanwhile, in the parallel world of New York, Jake is also suffering of the same mental divide and is trying to find a way to go back to Roland’s world. Most of the book is a build up to the moment of Jake finally makes it back and becomes a part of the group and they proceed on their Quest.

And, holy crap, is that build up ever full of tension and horror and I can think of many remarkable scenes that had me biting my nails in worry for the safety of the characters. Because that is really what these books are about to me now: Eddie, Susannah, Roland and Jake (and Oy!). I have come to care so much about them and hate what some of them have to go through (an aside: hated the scene with Susannah and the incubus demon and I sure hope that this trauma is addressed at some point) in this search. I do love how Roland’s mission has become a mission they all embrace. And I have to say that Roland as character fascinates me: his dedication to his mission, his kick-ass ability as a Gunslinger as well as his belief that he might have to do anything necessary to get to the Dark Tower. I loved how grudgingly he embraced the others as part of his mission because he is not perfect (oh so far from it) so he is not above petty jealousy either. And even though he must make hard decisions, and has made them as far back as book 1, these are still coming back to haunt him. The extent of his anti-heroism is such that he makes promises he knows he might have to break, and I don’t believe him for a moment AND IF YOU LET JAKE DIE AGAIN, ROLAND, I will lose it.

On the down side, some things frustrated me to no end. If on the whole I felt this was a more cohesive book than the previous one in the series, Stephen King remains his usual verbose self with many more scenes and words than I believe it’s necessary. I find it very telling that out of the books I read so far in the series, the first one, The Gunslinger which has “only” 300 pages, remains my favourite.

Similarly. things are kept from the reader in the most maddening way possible. For example: Roland sits down with the group for a parley only to say “we have talked enough, I can’t say anything else”. I have no idea where this plot is going and sometimes I do wonder if there is a clear direction with this story. In some ways it reminds me of Lost with its many mysteries. Some of those remained unresolved in the end and I have conveyed to Thea that if I read all these 7 books only to have all characters die on me with NO explanation about the Dark Tower, there will be a Smugglicide.

Still, I am super intrigued by the world, wondering about the Dark Tower and I definitely love the characters. I am excited for book 4 too: it appears to be the romance book. Bring it on. 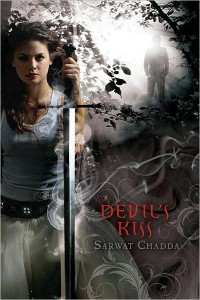 First and foremost, something needs to be said about Billi: what an incredible teen character. It is easy to relate to her and to feel for her, from her difficult relationship with her ruthless, removed father to her constant musings about duty. She is strong and a fighter but also vulnerable especially when having to make choices. I find it incredibly compelling that she has to go through the same conflict as before: when the time comes will she kill someone she loves to save the world?

This is a bloody and dark tale with a dash of romance on the side […] I really enjoyed Dark Goddess and will definitely be following more of Billi Sangreal’s adventures as a teenage Templar Knight.

Technically, I’m cheating since Ana read and reviewed book 2 in Sarwat Chadda’s series, Dark Goddess – but I think what Ana said of book 2 applies to this debut novel. In celebration of the US release of Dark Goddess, I decided to give Billi SanGreal a go…and I liked her a whole lot.

As Ana’s quote says above, Billi (full name Bilqis) is one hell of a character. The daughter of the current leader of the Knights Templar, an ancient order dedicated to fighting supernatural threats to humanity, Billi has grown up with a tremendous weight on her shoulders. Ever since her mother’s violent murder when Billi was just five years old, and then with Billi’s manifestation of ability at ten, her relationship with her father has been…strained. Billi feels like she’s never been given a choice, and that the brutal, blood-and-bruised life of the Templars has been forced on her. Ostracized at school, her only friend and fellow Templar Kay sent away to study and control his unstable psychic abilities, Billi only has her father and the other Knights. But Billi’s father, the great leader Arthur SanGreal, has always been cold, brutal and calculating towards his only child. Attempting to ingrain in her the hard-heartedness essential for their way of life, Arthur has never praised his daughter, and is quick to push her to injury, even choosing to sacrifice her for the greater good. Such is the Templar way.

Understandably, this has caused Billi to grow up a resentful, angry young woman. Even when she finally passes her induction test into the Order, she bitterly resents that she has never been given a choice to live as a normal girl (not that she has anything in common with normal teens), and is hurt that her father again seems not to care about any of her accomplishments. When Kay returns from his training in Jerusalem, Billi is relieved to at least have one friend around – but her enthusiasm is short-lived. Kay inadvertently wakes an ancient Templar artifact, and sends out a rousing cry that unleashes the wrath of Michael – the archangel, God’s killer angel – on the world. And Billi must put aside her fears and anger, truly embracing her abilities and identity as a Templar, if they are to have any chance at stemming Michael’s plague of retribution.

First things first: I loved Sarwat Chadda’s take on the supernatural and biblical/historical lore. The reinterpretation of the foundational elements of Christianity, Judaism and Islam is detailed and imaginatively rendered, on par with some of the best Judeo-Christian myth-based fantasy I have ever read. I loved the new order of the Knights Templar, and how the institution has changed over the centuries, dwindling to a handful of dedicated warriors in present-day England. Of course, the biggest draw to Devil’s Kiss is Billi, as the book rests on the strength of her characterization. And, again as Ana said, what a character Billi turns out to be. Angry, bitter, with an amount and depth of daddy issues that would make any Lost character proud, Billi manages to (mostly) walk the line between annoying whiny heroine, and sympathetic character. Her frustrations are not misplaced and its easy to understand why she is so bitter; yet for all of her toughened emotions and abrasive front, Billi remains a girl that longs for friendship and approval – and love – beneath her tough exterior. She’s forced to make some really, really shitty choices in this book, and she emerges damaged, but stronger for everything she has gone through. Because, let’s get something straight, dear readers: Devil’s Kiss is a DARK book. There is no happy-sweet romance here, and this is not your typical ass-kicking, generally PG-13 Urban Fantasy title. Billi’s story is desperate and painful, and I loved it for that.

From a storytelling standpoint, Devil’s Kiss takes a few missteps, with some repetitive passages and a tendency to occasionally lose sight of the overall direction of the plot. That said, when the book really get going, it picks up in a big way. As this is Sarwat Chadda’s first book, these lapses are understandable, and based on the strength of the characters and vividness of Billi’s world, these issues are easily overlooked. I truly enjoyed Devil’s Kiss and will certainly be back for more with Dark Goddess very, very soon. Absolutely recommended.