Old School Wednesdays Readalong: So You Want to Be A Wizard by Diane Duane

This month’s OSW Readalong pick is So You Want to Be A Wizard by Diane Duane.

For every readalong book, we’ll structure this a little bit differently than our usual Joint Review fare – first, we’ll give our (brief!) opinions regarding the book, then we’ll tackle some discussion questions. Finally, we’ll ask YOU to join in. 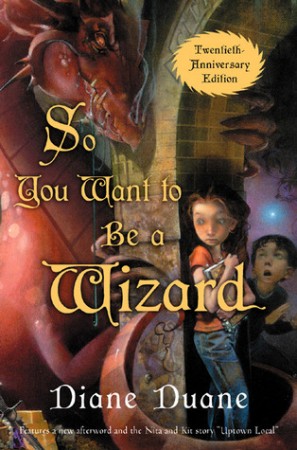 Title: So You Want to Be A Wizard

I don’t belive this, Nina thought. She shut the book and stood there holding it in her hand, confused, amazed, suspicious–and delighted. If it was a joke, it was a great one. If it wasn’t . . . ?

Stand alone or series: Book 1 in the Young Wizards series

Ana’s Take: I’ve always heard such great things about this book and series, I was very happy when it was chosen for the Readalong.

Now that we’ve read it, I have mixed feels about it. On the one hand, I like that the two protagonists are Hispanic kids, I appreciated some of its themes especially those pertaining to choosing between right and wrong and about being merciful; and how there is this zany quality to the story progression that is reminiscent of Diana Wynne Jones’ books. On the other hand, maybe the very same zany quality prevented me from actually feeling completely smitten with the novel? That maybe there is too much happening – everything but the kitchen sink – at the speed of light and not enough time is spent actually developing things? Or maybe that’s just me?

Thea’s Take: The Young Wizards series was vaguely familiar to me (I think I may even have read this book when I was a kid), so I was pleased when I saw that this title had been chosen for the July readalong. But, like Ana, I have mixed feelings towards So You Want to Be A Wizard. I liked the blend of science fiction and fantasy, and I loved the idea behind magic in this book and how one becomes a wizard. Similarly, the characters were fun, and the writing style wonderfully zany. That said, the plot itself was excessive and I found my attention wandering while reading the book. I think I may have appreciated this more, had I come to the series as a child unfamiliar with YA SFF, but… as it stands, I wasn’t overly impressed.

1. Let’s start with plot and context. So You Want to Be A Wizard was initially published in 1983 – since then, there have been a slew of other YA fantasy novels that involve wizards (including one very popular bespectacled Boy Who Lived). How does this novel stack up? Does it stand the test of time?

Ana: Interesting question. Not sure how to answer this – because there is a sense of familiarity about it, right? But it being written prior to the works I’ve read which themselves are responsible for creating that sensation means something. But it’s not like I can be all tabula rasa when reading it. There is no avoiding that sensation from a subjective perspective – and that goes for works that were published before (like A Wrinkle of Time which this book also reminded me of a bit) and after (like the aforementioned Harry Potter and Diana Wynne Jones).

That said, objectively speaking, familiar tropes become familiar tropes for a reason and what matters is what you do with those tropes. I think that this book handles the Quest really well, as it does the topic of bullying (more on that later) and yes, I think it does stand the test of time on its own.

Thea: I’m of two minds. As Old!Thea, reading So You Want to Be A Wizard for the first time as an adult (one who is fairly well-versed in science fiction and fantasy), I wasn’t smitten with the novel. Objectively speaking, I know this isn’t any fault of the book – it predated Harry Potter, and any number of recent YA novels that feature wizards and/or blend interplanetary science fiction with fantasy elements. As Kid!Thea reading this novel for the first time with fresh eyes, I probably would have been much more likely to love the series.

But… like Ana says, you can’t really read books in a vacuum – experience and other external factors contribute to one’s enjoyment and interpretation of any given text. Not to mention, I’ve retrospectively read seminal books that have inspired many tropes and various reimaginings/borrowings over time – and I’ve been enamored with said seminal books. I can’t say that So You Want to Be A Wizard accomplishes that sense of timeless awesomeness, unfortunately.

2. So You Want to Be A Wizard blends elements of science fiction and fantasy, from physics to magic. In your opinion, is this blend successful or unsuccessful?

Ana: This is probably where I am most torn about the novel. I think the blend of Science Fiction and Fantasy and of physics and magic is successful for the most part. Fred – the white hole – adds an interesting scientist side as does the magic background that involves all the living things being connected, etc. I am also a sucker for parallel dimensions and different worlds and surprise!time travel!. Those elements were blended successfully for me.

But I will admit I was a bit blindsided when the Archangel Michael had a cameo because all of sudden, on top of everything else, this world also has Judeo-Christian connections and I was less enthused about that (I also don’t think that aspect of the novel added anything new to it?).

Thea: Conversely, I actually really loved this aspect of the book. In fact, it’s probably my favorite thing about So You Want to Be A Wizard! I wasn’t expecting talk of black holes and white holes, quasars, and neutrinos to enter this fantasy novel, but they did and I thought it was delightful. Clearly, Fred is the standout character as the personification of a white hole that emits (unlike its black hole cousins that prevent any matter from escaping) – but beyond Fred, there’s also discussion of alternate/parallel versions of places, which factors in very nicely to the overall story. I also very much enjoyed certain fantasy angles to the novel, particularly the power of words (and mathematically balanced equations) to magic-working. How cool is that?!

And yet, as Ana points out, there’s a bit much happening, and some of it is not so great. The Good/Evil overtones, in particular, were not my favorite… but more on that next.

3. This novel also focuses on dichotomies in symbolism and theme – bright and dark, right and wrong, positive and negative. Does this work in your opinion? Why or why not?

Ana: Yes, because I feel those were explored without a lot of didacticism and came down more as a matter of choice and of allowing people to choose between those? Like those were not innate, natural, intrinsic qualities but something you have to choose to be? In that sense, I loved the eventual showdown between Nita and the Bad Guys (both the magical enemy and the immediate enemy i.e. her bully). Because it was all about giving second chances and seeing people as people capable of making different choices and changing.

Thea: I don’t know. I agree about the matter of choice, and I appreciate that it does come down to personal choice and agency. That said, the book is incredible didactic, divided between very clear lines of what is GOOD and what is EVIL – which is a little frustrating to read because there’s so much room for MORE. Gradations of good/bad, conflicted motives, ethical quandaries… I want to read about those things. I keep bringing up Harry Potter, but despite being polarizing between good and evil on the surface, there’s so much more going on in that world and with those characters. Here? Not so much.

4. Let’s talk characters – what did you think of the characters and their arcs? Any favorites?

Ana: Although the novel is much more plot-driven than character-driven, there were still interesting character developments in the novel to keep me interested in them. I loved Nita: I loved her struggle and her way of dealing with bullying. With regards to that issue, I found interesting how it seemed to be connected with racism or at least experienced differently in the context of Nita’s mixed-raced family? Her white father is all “why don’t you defend yourself” whereas her Hispanic mother is all “I understand what you are going through”, possibly because she too, was bullied? That dynamic was very understated but definitely there.

Do you know what I truly and really loved about the book? That Nita’s motivation for going down this Quest was to find her missing pen, taken for her when she was beaten by her bullies. Obviously that pen is a placeholder, a metaphor for her wanting to get back what she lost, because it’s probably the most empowering think she can think of at that moment.

Thea: FRED! Fred is the best. I love the way that Diane Duane is able to imbue life into what is essentially an astral body/phenomenon, turning it into a funny, interesting character. Of course, I’m also a big sucker for Nita (short for Juanita), who is incredibly smart and gutsy, and a heroine who finally finds her calling in a strange book.

If I had one complaint about the characters, particularly Kit and Nita, it’s the fact that they basically know all the things – from physics, to equation balancing, to spell-working. And these two characters are brand new wizards, but they’re already fraught with mortal/dimensional peril. Not that there’s anything wrong with that setup, I just had a tough time buying that they would be so adept so quickly to face such huge hurdles. But… that’s just me.

5. Have you read any other Diane Duane books? Will you read more of her work in the future?

Ana: This was my first DD book and I would probably read more of her books although probably not this series. Like I said, I enjoyed a lot of the book but wasn’t completely in love with it.

Thea: Same here! I will likely check out Diane Duane’s other work, but I don’t know if I’ll continue this series.

Now over to you! Please feel free to engage with the questions (and our answers), come up with your own talking points, and/or leave links to your reviews!