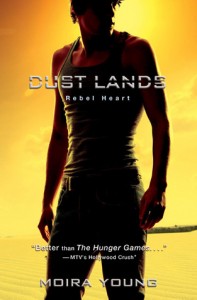 Nothing is certain and no one is safe in the second book in the highly praised Dust Lands trilogy, which MTV’s Hollywood Crush blog called “better than The Hunger Games.”

It seemed so simple: Defeat the Tonton, rescue her kidnapped brother, Lugh, and then order would be restored to Saba’s world. Simplicity, however, has proved to be elusive. Now, Saba and her family travel west, headed for a better life and a longed-for reunion with Jack. But the fight for Lugh’s freedom has unleashed a new power in the dust lands, and a formidable new enemy is on the rise.

What is the truth about Jack? And how far will Saba go to get what she wants? In this much-anticipated follow-up to the riveting Blood Red Road, a fierce heroine finds herself at the crossroads of danger and destiny, betrayal and passion.

Stand alone or series: Book 2 in the Dust Lands

Why did I read this book: I absolutely loved the first book in this series, Blood Red Road (in fact, it was one of my top 10 reads of 2011), so was naturally on pins and needles for this second book to finally come out.

It’s been weeks since Saba has rescued her twin brother Lugh from the clutches of the Tonton, leaving a wake of victorious destruction in her path. She’s fought and brought down the corruption of Plague Town; she’s defeated and killed the mad king. Now she, Lugh, Emmi, and Tommo head out west to the Big Water to start life anew in a land of plenty, free from the pestilence and fearful rule of the Tonton. Jack, whom Saba now realizes she loves (even if she doesn’t like to admit it to herself), has taken a detour back east to break the news of Ike’s death to his unknowing widow, Molly – but he takes Saba’s heartstone with him, and vows to find her out west as soon as he’s done his duty.

As the weeks pass and Saba and her family lose their way in the barren wastes, she begins to despair that she’ll ever see Jack again. Worse, Saba’s grip on reality grows thin and her nerves are frayed – she can’t hunt or shoot, haunted as she is by the memory of all those she’s killed, all the black marks she’s accumulated as the Angel of Death. Things seem even more bleak when Saba and her ailing caravan meet up with Maev, who brings news that the Tonton have found the Free Hawk sanctuary at Darktrees, slaughtering everyone. Only Maev was able to escape, and she brings with her grim, impossible tidings: Jack has joined the Tonton. Saba refuses to believe it, and clings to the truth she holds in her heart, that Jack must’ve helped Maev escape as a message to Saba and a plea for help. Alone, she makes the decision to travel back east – despite the price that the Tonton have on her head – to save Jack and be reunited with her heart’s true desire once more.

Just as its title suggests, Rebel Heart diverts from the action-packed, character-deep focus of Blood Red Road and turns to romantic entanglements of the heart. These entanglements, unfortunately, aren’t nearly as compelling as Saba’s trek across a ruined desert to save her brother. While on the whole, Rebel Heart contains many of the elements that made Blood Red Road such a fantastic read – namely the killer narrative and writing style – this second installment favors an irritating love triangle (quadrilateral, actually) in lieu of the strong characterizations and central driving action of the first book. To put it another way: if Blood Red Road was the start of Saba’s Hero’s Journey, which she embarks upon guns blazing, Rebel Heart mired in denials, challenges and temptations, as Saba questions herself, her goals, and the desires of her heart. While this particular leg of the hero’s journey can be pretty awesome (see The Empire Strikes Back for a middle installment kicking ass), Saba’s challenges and temptations are somewhat less engaging than those of Luke Skywalker. This is probably because all of Saba’s questions and challenges are centered on the not-so-interesting question: which man represents Saba’s heart’s true desire? Is it Jack, the romantic interest from the first book? Is it DeMalo, the powerful man leading the Tonton who desires to craft a New Eden free of weakness and strife? Is it Tommo, the deaf boy that has grown up so much since Blood Red Road, who idolizes – nay, loves – Saba? Or is it the (not romantic) promise of a prosperous, uneventful life with Lugh, Saba’s twin brother, for whom she has risked so much to save?

The fact that the central conflict of Rebel Heart focuses on these questions is also frustrating because it is a sort of “gotcha” – the book actually begins with an entirely different central conflict, with Saba suffering from post-traumatic stress. Unable to shoot her bow, even to hunt game, Saba’s hands shake and her thoughts are tortured as she grapples with the reality of the havoc she has wreaked and the many lives she has taken in her desperate rescue of Lugh. While this is happening, Lugh and Saba’s relationship grows increasingly strained, their former unconditional bond of love frayed and complicated – Lugh refuses to tell Saba about whatever has happened to him during his time with the Tonton (though we know it is something very, very bad), and in turn Saba refuses to tell Lugh about the ghosts that are haunting her every waking and sleeping moment. It is very clear early on in Rebel Heart that things cannot go back to the way they once were, and I absolutely loved that this book seemed to be a novel of consequences – the price that Saba, Lugh and even Jack have to pay for their actions in Blood Red Road. This is the stuff of a fascinating, truthful and brave second book.

Unfortunately, no sooner is this masterful groundwork laid than Rebel Heart veers sharply, magically waving away Saba’s PTSD (cured with a shaman’s intervention, who banishes Saba’s ghosts with a potion and a spirit walk), and refocusing the story on Saba’s tangled desires, and the men (three of them!) that have fallen in love with her on her hero’s journey. On its face, this does not sound like a particularly appealing storyline, does it? It’s a credit to Moira Young’s writing, then, that Rebel Heart still manages to be a solidly entertaining and palatable book. Part of this is because Saba is still a remarkable heroine, even when she’s doubting herself. I love that Saba is prickly and conflicted, and I like that she makes mistakes and has to pay for them (handwavey magic PTSD cure aside). I alos appreciate that by this book’s end she actually does seem to know what she wants and where her heart’s desire lies (although whether or not this is enough to justify the direction of this second book is another matter).

And, to be completely honest, even though the romantic entanglements are ridiculous, at least we can understand why each of these characters have fallen for Saba. In all honestly, the more that I think about Rebel Heart, the more I realize that the bigger issue I had with the book was its shockingly cavalier treatment of Saba’s very real PTSD – using magic as a band aid for her trauma – and its reliance on Fate/Destiny, rather than its romantic shenanigans. I am not a fan of books whose heroes are Preordained By The Stars, whose super specialness is a result of cosmic alignment and fate as opposed to the choices and actions made by said character. I also do not appreciate very real problems being waved away with some halfassed magic – especially as Saba’s world seems to be one that is a future post-apocalyptic iteration of our own, otherwise devoid of magic. Of course, this is one person’s opinion, and probably a question of taste/perception – your mileage may vary.

Rebel Heart is, to say the least, a mixed bag. As with Blood Red Road, I thoroughly appreciate Moira Young’s prose and stylistic writing choices, just as I appreciate the conflicted figure of Saba in this second book. I am not so enthused about the multi-fronted romantic thrust of this second book, nor am I crazy about the magical cure-all posited in the novel’s first act. In other words, while I basically enjoyed Rebel Heart, it doesn’t hold a candle to the awesomeness that was Blood Red Road. Still, I’ll be back for book three in hopes that the trilogy will conclude in a fashion befitting the awesome promise of book one.

It’s late afternoon. Since morning, the trail’s been following a line of light towers. That is, the iron remains of what used to be light towers, way back in Wrecker days, time out of mind. It winds through faded, folded hills, burnt grass and prickle bush.

The flat heat of high summer beats on his head. His hat’s damp with sweat. The dust of long days coats his skin, his clothes, his boots. He tastes it when he licks his dry lips. It’s been a parched, mean road all the way. He crests a ridge, the trail dips down into a little valley and it’s suddenly, freshly green. The air is soft. Sharply sweet with the scent of the scrub pine that scatters the slopes.

Jack pulls up his horse. He breathes in. A long, deep, grateful breath. He drinks in the view. On the cleared valley floor, a small lake glints in the sun. Beside it stands a junkshack with a bark and sod roof, the rest of it cobbled together from Wrecker trash, stones, dried mud and the odd tree trunk. A man, a woman and a girl are working in the well-tended patches of cultivated land.

People. At last. Apart from the white mustang, Atlas, he hasn’t spoken to a soul for days. His aloneness was starting to weigh him down.

An there was I, he says aloud, thinkin I was th’only person on the planet.

Additional Thoughts: Make sure to check out our stop on the official Rule of Three Blog Tour, including a guest post from author Moira Young about Saba’s Heartstone and the role it plays in Blood Red Road and Rebel Heart. Plus, there’s a chance to win a Dust Lands prize pack (including a copy of both books), too.

Rating: 6 – Good, and hopefully book 3 will close out the trilogy with a bang worth of the series’ first act.

Reading Next: Jepp Who Defied the Stars by Katherine Marsh

Joint Review: The Year of Shadows by Claire Legrand