Title: Murder Most Unladylike (UK) / Murder is Bad Manners (US) 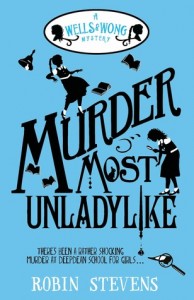 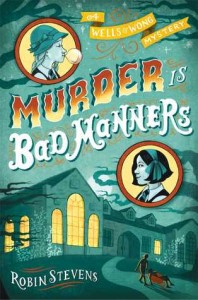 Deepdean School for Girls, 1934. When Daisy Wells and Hazel Wong set up their very own deadly secret detective agency, they struggle to find any truly exciting mysteries to investigate. (Unless you count the case of Lavinia’s missing tie. Which they don’t, really.)

But then Hazel discovers the Science Mistress, Miss Bell, lying dead in the Gym. She thinks it must all have been a terrible accident – but when she and Daisy return five minutes later, the body has disappeared. Now the girls know a murder must have taken place . . . and there’s more than one person at Deepdean with a motive.

Now Hazel and Daisy not only have a murder to solve: they have to prove a murder happened in the first place. Determined to get to the bottom of the crime before the killer strikes again (and before the police can get there first, naturally), Hazel and Daisy must hunt for evidence, spy on their suspects and use all the cunning, scheming and intuition they can muster. But will they succeed? And can their friendship stand the test?

Stand alone or series: The first in the Wells and Wong series

Why did I read this book: Girls! Detectives! and also Aisha’s review

I have a confession to make: I have the hardest time suspending disbelief when it comes to books featuring children investigating murders cases. I often find myself utterly unable to believe that children are better at this than actual detectives and also: what-are-these- children-doing-investigating-murders-don’t-they-know-how-dangerous-that-is? And YET: I equally seem to always find myself navigating toward these books and reading them anyway because Girls! Solving crimes! is too attractive a premise for me to pass. With that in mind, the success of such books will ultimately depend on the execution and the voice.

Cue Murder Most Unladylike which turned out to be so delightful, it was easy to suspend disbelief. It’s a blend of historical novel – set in the early 30s in a boarding school for girls – and old-school detective novels a la Sherlock Holmes. The narrative is doctorwatson-ed (TM Adam Roberts) by Hazel Wong, a Hong Kong expat who, together with best friend Daisy Wells, runs a secret detective agency that up until the beginning of the novel had only come across mundane cases to investigate.

But then one fateful day, Hazel finds the body of their Science Mistress, Miss Bell, in the gym. Hazel runs for help but when she returns with Daisy five minutes later, the body is gone. Official word from school says Miss Bell is simply gone – something to do with a broken heart maybe. But Hazel and Daisy know better and intend to prove that a murder actually happened.

Murder Most Unladylike’s central murder mystery is not only skilfully plotted but also built on incidental threads that when put together provide an interesting picture that encompasses not only the actual mystery but also difficulties surrounding the two main characters’ friendship as well as wider gender, sexuality (two of the female teachers are in a relationship, one of them clearly bi) and race issues.

As a character of colour, Hazel has had to deal with the casual racism and micro-aggressions of her classmates as well as an interesting internalised anglophilia. Similarly, given the historical context of the novel, it’s no surprise that gender roles are foremost when portraying the girls. There are burdens put on the girls that relate to their gender, to the sort of good behaviour that is expected of them (actually part of the murder investigation in more ways than anticipated) and to how intelligent and smart they are allowed to be. This latter point is actually, a strong focus of Daisy and Hazel’s characterisation, both girls having had to play down their smarts; their “secret” detective agency therefore functions as an outlet for their intelligence.

My favourite thing about the book though – beyond Hazel’s voice – is the girls’ own fraught relationship. It’s clear that they like each other but there is a marked power difference in their dynamics that relates to class, race and self-confidence. The evolution of that relationship is something that will be interesting to follow in future instalments. That is to say: I will be back for more. And for an excellent companion/read-alike: you can’t go wrong with last year’s The Wig in the Window by Kristen Kittscher.

Reading Next: Scale-Bright by Benjanun Sriduangkaew