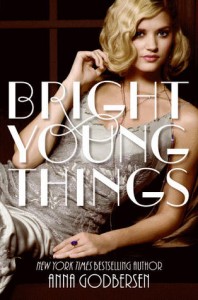 The year is 1929. New York is ruled by the Bright Young Things: flappers and socialites seeking thrills and chasing dreams in the anything-goes era of the Roaring Twenties.

Letty Larkspur and Cordelia Grey escaped their small Midwestern town for New York’s glittering metropolis. All Letty wants is to see her name in lights, but she quickly discovers Manhattan is filled with pretty girls who will do anything to be a star…

Cordelia is searching for the father she’s never known, a man as infamous for his wild parties as he is for his shadowy schemes. Overnight, she enters a world more thrilling and glamorous than she ever could have imagined—and more dangerous. It’s a life anyone would kill for . . . and someone will.

The only person Cordelia can trust is Astrid Donal, a flapper who seems to have it all: money, looks, and the love of Cordelia’s brother, Charlie. But Astrid’s perfect veneer hides a score of family secrets.

Across the vast lawns of Long Island, in the illicit speakeasies of Manhattan, and on the blindingly lit stages of Broadway, the three girls’ fortunes will rise and fall—together and apart. From the New York Times bestselling author of The Luxe comes an epic new series set in the dizzying last summer of the Jazz Age.

Why did I the book: Jazz! Flappers! Prohibition! How could I not want to read it?

I wanted to read Bright Young Things because of its setting: 1929, New York at the height of Prohibition. I don’t think I ever read a book set in this particular period and it seemed interesting. The book follows three girls, alternating point of view between them.

The story opens in Union, Ohio where Cordelia Grey is getting married to her boyfriend after being caught in flagrante delicto. Just before going into the church she tells her best friend Letty that that night, they are taking the train (not the midnight one) and leaving for New York to follow their dreams. Cordelia is secretly searching for a father she never knew and Letty wants to be a Star. Meanwhile, in New York, Astrid spends her time being altogether glamorous and exciting.

The opening chapters are quite entertaining. The author succeeds in describing the setting, the Big City, the atmosphere which is full of exciting opportunity for those trying to change their lives. That goes extremely well with regards to Cordelia and Letty and their arrival in New York. It is also a success in the way that establishes its characters: the strong Cordelia who has this one dream since she is young and will stop at nothing to accomplish it; she is realistic, smart and witty and in direct contrast to her best friend Letty who is naïve and guileless, although equally motivated to make her dream, that of becoming a singing and dancing star, come true. On the other end of the spectrum, Astrid is moneyed and beautiful and uses both to do as she pleases in order to have a good time, with or without her boyfriend Charlie.

But that is only at first glance. Once the story gets moving, things start happening at speed of light, it is hard to keep up when events are thrown at the reader one after the other. As soon as they arrive in NY Cordelia and Letty have a huge fight and separate. As soon as they separate, both get exactly what they want: Cordelia finds her father, who is a known gangster and bootlegger and who accepts her with open arms – publicly and without even blinking. All of a sudden, Cordelia is a heiress, with a loving father and an insta-friend in Astrid, the flapper. Meanwhile Letty, finds her own insta-friend to replace her oldest friend in the world, who helps her get a job, a place to stay and who gives her advice on auditions.

I think that the greatest gripe I have with the book, is that the author takes no time at all with any of the storylines or any of characters. As soon as the characters are established, they start to behave completely differently from what we have been let to believe they would. For example: Cordelia, as soon as she arrives in NY, she falls in insta-love with some dude she meets at a bar. Who turns out to be the son of her father’s number 1 enemy. Cordelia, who up to that point had been presented as smart and extremely dedicated to finding her father since she was a small child decides that it is a good idea to share the GREATEST SECRET that her father has with this boy she only just met. Similarly, the insta-friend who helped Letty so much, decides to change her mind, equally out of a sudden and just sends Letty away. Of course, all of that only add conflict to the story which is always a good thing, but not when it is so blatantly unnatural. It is as though the characters change their behaviour to move the plot along.

And because everything happens so fast, within such a short period of time (two weeks), it is really hard to care or believe in any of that. Plus, even thought to start with, the descriptions of the Era of Jazz are exciting, soon it becomes a lot of the same: was the 20s all about flappers, starlets, speakeasies? Although I can’t say I am an expert, it all seemed only skin deep, relying a lot on description of places and clothes to try and produce the idea of an Era.

There were a few things that I really liked though: the prologue, Cordelia’s first appearance in the story and Astrid. Astrid was definitely my favourite thing about the book although I am uncertain as to how to approach her character. Is she REALLY a flapper? In my mind, flappers are all about independence and a symbol of early feminism but Astrid’s life ended up being restricted by her relationship with Charlie, her boyfriend: her thoughts were nearly 99% Charlie-related. Perhaps that was the real tragedy in the book. In the end, it was just disappointing and I don’t think I will carry on with the series.

Notable Quotes/Parts: My favourite parts were the prologue and the first chapter. You can read both here:

Get this for your site

Additional Thoughts: I would love to read more books set in this time period. Any recommendations?

Reading Next: Play of Passion by Nalini Singh