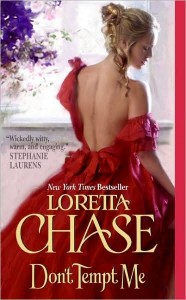 Stand Alone or series: Stand Alone (although part of a “series” of books about Fallen Women)

That’s the headline when Zoe Lexham returns to England. After twelve years in the exotic east, she’s shockingly adept in the sensual arts. She knows everything a young lady shouldn’t and nothing she ought to know. She’s a walking scandal, with no hope of a future . . . unless someone can civilize her.

Lucien de Grey, the Duke of Marchmont, is no knight in shining armor. He’s cynical, easily bored, and dangerous to women. He charms, seduces, and leaves them—with parting gifts of expensive jewelry to dry their tears. But good looks, combined with money and rank, makes him welcome everywhere. The most popular bachelor in the Beau Monde can easily save Zoe’s risquÉ reputation . . .

Why did I read the book: It is a Loretta Chase book. I would read a book about the Working Pieces of Your Dishwasher if it was written by Loretta Chase

It is a truth accepted and confirmed by us, Book Smugglers, that if you are in search of a good romance novel you should look no further than the “C” in your local book store. It is there that you will find Loretta Chase’s books in all their splendid quality that comes from all The Loretachaseness in them: wonderful dialogue, the light and yet deeply emotional plots and wonderful heroes and heroines.

Don’t Tempt Me is yet another one to those books by the author in which every single thing works. And it is with great delight that I report that this is a story with two of my favourite tropes – the Reformed Rake and the Childhood Sweethearts.

Our heroine is Zoe, was twelve years old when visiting Egypt with her family when she is kidnapped and taken as a slave to a Harem. Her disappearance is never understood or explained to her family. But her father never stops hoping for her return – that happens 12 years later with not a small amount of scandal. Zoe is thoroughly changed by her experience. Her thought process is alien to English society and her sexual experience is not one that Ladies should have. She needs to find a place in Society, the place it was always meant to be hers and for that she needs the help of someone who can guide her in her launch and that person is Lucien de Grey, the Duke of Marchmont. Lucien is a rake, a bored Lord who spends his days without purpose and who respects only one person in the world: Lord Lexham , his father’s best friend and the man who guided him when all his family was lost when he was a child. It is because of this respect for Zoe’s father that he accepts to tutor Zoe. That, and the fact that 1) they used to know each other when children 2) the powerful pull he feels towards the woman.

They met when Lucien was ten and Zoe Octavia was five. She, the youngest of 8 siblings- he, the recently orphaned boy who needed help from her father to get over his sorrow. Lexham helped alright – but Zoe, Zoe was the antidote to his unhappiness. The cricket incident in the prologue shows all we need to know about Lucien and Zoe:

“She was eight years old. The boys were organising a cricket game. She stormed up to him.
“I want to play, Lucien. Tell them to let me”
“Girls don’t play cricket,” he said. “Go back to your dolls and your nursemaid, brat”
She snatched up a bat and swung it at him – or tried to. She swung as hard as she could, and kept on going. Round and round she went, like a whirligig, and down she went, on her arse.
And there she sat, her disorderly golden hair standing on end and her vivid blue eyes wide open and her mouth open too, so startled she was.
He laughed so hard, he fell down, too.
She was annoying, sometimes infuriating, generally impossible. And she was a bright, bright spot in his life.”

The girl who was a spitfire and very stubborn, who was always disappearing and the boy who would always find her and reign her in. The dynamics remain the same even after the years they were apart even if the two people have changed. The boy who laughed is somewhere underneath a pile of restrained emotion – unwelcome thoughts, unwanted memories, unused emotions are all stored in his Mental Cupboard. Plus, he can’t believe she is back. He won’t believe she is back. And yet, there she is. Different, but the same.

“I crossed the seas, and it was like crossing years”

He has given his word he will help her (and when Lucien gives his word, he won’t take it back) even if it kills him. It might as well do so. The words Zoe utters as soon as she is back , taunt and haunt him:

“I know all the arts of pleasing a man”

And this is a book filled with the most amazing sexual tension and innuendos. Every sex scene works to develop the plot – from the most unusual to the most funny: like when they can’t help but to fall in each other’s arms even there in the park. Where they laugh and are drunk in each other kisses, and they hardly even notice that they are in public until one of her sisters find them and proceeds to smack Lucien’s head with her parasol. “It is like separating dogs” she says. Then Zoe, this amazing heroine raises herself in her elbows and glares at her sister

“I am going to kill you”, she said. “Are you a crazy woman ,to interrupt at such a time? I do not care how pregnant you are. There is no excuse…”

This freedom that Zoe experiences for the first time in 12 years is all that she cares about , it is all that is important to her coupled to her need to exist in her own world. To be presented to the Queen is the answer to the latter (and when she does so, the scenes that follow with Lucien are wonderfully tender) and to be with Lucien is the answer to the first. Even if it is difficult at first.

Because Loretta Chase’s books may be light in tone but that does not preclude emotional depth. Like for example, the guilt that Zoe feels – it was not her fault that she was taken but because she had a reputation for disappearing acts, it isn’t a surprise that she would wonder if that wasn’t expected . In a way , it reminded me of the Boy Who Cried Wolf fable.

Similarly, her heroes usually go through a lot before the book ends and Don’t Tempt Me is no different. Lucien only holds his position in life because of the horrible losses of people he loved – and yes, that includes Zoe as well. That causes not only emotional detachment but also avoidance of his responsibilities as a Duke. Once he is able to open the emotional side of his heart and he is freed from his own restraints, it is time to confront what his (in)actions have caused . Regular readers of this blog will know that I am not a big fan of secondary suspense plots but in Don’t Tempt Me, the secondary is necessary and important – it is has not only verisimilitude (it was bound to happen given how Lucien lived his life) but it is also important for him to face the result of his way of living. He too, is guilt-ridden. And it is painful.

One last word about a detail I am sure some readers may not like. This is not really a spoiler as it is disclosed in the first pages. I was surprised to learn that even though Zoe lived in the harem as a second wife she was still a virgin. I really wanted her to a True Fallen Woman. But Loretta Chase plays the virgin card with aplomb – because Zoe is well and truly experienced and this virginity is only but a detail that is put aside so very easily – and you will know what I mean when you read the carriage scene. Plus, and this is really good: there is a perfectly reasonable explanation why she is still a virgin that it’s even part of the reason why she was taken in first place.

Basically: anything Loretta Chase throws at me, I will bite, chew and swallow with gusto as everything will inevitably taste as chocolate covered strawberries. This is the case with Don’t Tempt Me and I finished it with the satisfied feeling that I just read a good Romance, a good book, a good story.

Notable Quotes/ Parts: This excerpt shows when Lucien sees Zoe for the first time in years.

Additional Thoughts: We will post a Chat with Loretta Chase tomorrow where we talk about the book, the series, harems and more. We will also be giving away a copy of the book.

Verdict: Loretta Chase has yet to disappoint. Don’t Tempt Me is another fresh, witty, full of the wonderful, typical lorettachaseness that I have come to admire and love. Romance novels don’t get much better than this.

Reading Next: Bound By Your Touch by Meredith Duran