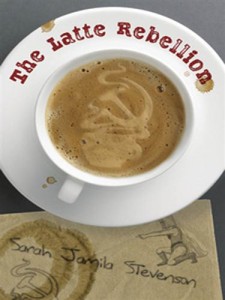 Our philosophy is simple: Promote a latte-colored world! —from the Latte Rebellion Manifesto

When high school senior Asha Jamison gets called a “towel head” at a pool party, the racist insult gives Asha and her best friend Carey a great money-making idea for a post-graduation trip. They’ll sell T-shirts promoting the Latte Rebellion, a club that raises awareness of mixed-race students.

Seemingly overnight, their “cause” goes viral and the T-shirts become a nationwide fad. As new chapters spring up from coast to coast, Asha realizes that her simple marketing plan has taken on a life of its own-and it’s starting to ruin hers. Asha’s once-stellar grades begin to slip, threatening her Ivy League dreams, and her friendship with Carey is hanging by a thread. And when the peaceful underground movement turns militant, Asha’s school launches a disciplinary hearing.Facing expulsion, Asha must decide how much she’s willing to risk for something she truly believes in.

Why did I read this book: It sounded good, I liked the cover, and Ari liked it.

It all starts at a pool party when a classmate throws a racist slur at our protagonist Asha Jamison by calling her a towel-head. Asha, who is part Indian, part Mexican and Irish, is not only offended but also exasperated and rightly so. This experience moves her and her best friend Carey to start The Latte Rebellion venture: a money-making scheme to fund their upcoming summer vacation by selling t-shirts; and if they manage to raise some awareness about racial complexity well, all the better. The first step is to create an anonymous website, a logo for the t-shirts and a Manifesto (“The cause of brown people everywhere”); the second, to start a marketing campaign by spreading posters and flyers. Their aim is at first, to sell a bunch of t-shirts and be done with it. But what starts simply as a money-making scheme, soon grows into a proper revolution when word starts to spread out to other schools and universities.

The Latte Rebellion is a coming of age novel and as such, it skilfully deals with the complex theme of ethnicity both in terms of character arc and in terms of narrative. The latter comes into play as the story alternates between past, with be beginning of the movement; and present, as Asha is attending a school board hearing which will decide whether she will be expelled or not. Clearly, something has gone really wrong and as the story progresses (and alternates) between past and present, it is plain that the Asha who sets out to sell t-shirts is not the same Asha sitting down in front of the school board now. Which brings me to the former: there is character growth and political awareness yes, but also interesting developments with Asha’s personal relationships with her best friend and members of her family which brings up the dichotomy between the “personal” and the “public” arenas of her life and how one can interfere with other – and how do you deal with it?

On the flip side, whereas the narrative format really works and whereas both the premise and main theme of the book are definitely admirable, I thought that some aspects of the novel threaded too near “un-believability” territory. For example, this is the original Latte Rebellion Manifesto, which Carey and Asha came up with, after little to no thought:

If you are reading this, you are clearly sympathetic to the cause!
What cause, you ask?
The cause of brown people everywhere—
whether you have espresso-colored hair,
a perfect latte tan, or you’re as light as a mocha bianca!
The world must acknowledge you!
The world will appreciate you!
Our philosophy is simple:
Promote a latte-colored world!
Forget bananas and coconuts!
Go for the seamless blend! You can’t un-latte the latte!
It doesn’t matter if you are only coffee on the inside.
If you’re a latte at heart, you are welcome.
Iced or hot, raise your cup to the cause!
Lattes of the World, Unite!

I don’t know…although I can see its merits I find it quite simplistic and I find rather difficult to believe that this manifesto would spring such a movement and new chapters throughout many schools and even universities all over America. On the other hand, one can certainly argue that the direct message probably makes it easier for people to be onboard and that many viral campaigns start with a simple idea like this especially when it is a worthy idea. I remain unconvinced though. Let’s put that down to the most cynical part of myself.

Another thing I found hard to believe is how Asha, toward the end of the novel thinks that the Rebellion has taken over her life. Although I can honestly see she did have a change of heart and believes in the ideology (back to the character growth aforementioned), the fact remains that she might tell us that she is completely involved in the movement to the point where she finds little time to study for example, but she is not effectively doing anything other than attend a couple of meetings and check the website as the most important roles within the organisation have been delegated to other people.

As you probably know by now, I really welcome books that delve into complex contemporary themes and I think that The Latte Rebellion raises interesting questions about the racial landscape in America and about multiculturalism and in spite the misgivings above it is a solid debut by Sarah Jamila Stevenson.

The Latte Rebellion wouldn’t have gotten as big as it did if it hadn’t been needed. Sir, do you realise there are people out there who still think that to be proud of being mixed-ethnicity is somehow un-American? Somebody left a comment on our website saying that if we’re not happy with the way things are, we ought to go back were we came from”.

Over at Kirkus: The Anderson Project