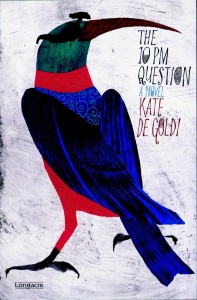 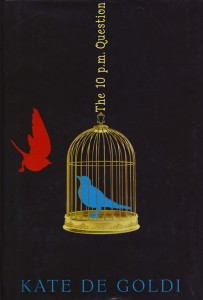 Twelve-year-old Frankie Parsons is a talented kid with a quirky family, a best friend named Gigs, and a voice of anxiety constantly nibbling in his head: Could that kidney-shaped spot on his chest be a galloping cancer? Are the smoke alarm batteries flat? Has his cat, The Fat Controller, given them all worms? Only Ma, who never leaves home, takes Frankie’s worries seriously. But then, it is Ma who is the cause of the most troubling question of all, the one Frankie can never bring himself to ask. When a new girl arrives at school–a daring free spirit with unavoidable questions of her own–Frankie’s carefully guarded world begins to unravel, leading him to a painful confrontation with the ultimate 10 p.m. question. Deftly told with humor, poignancy, and an endearing cast of characters, THE 10 P.M. QUESTION will touch everyone who has ever felt set apart.

Worry-prone Frankie keeps his family secret under control–until a bold, inquisitive girl enters his life–in this warm, witty, and captivating YA novel.

How did I get this book: ARC from the US publisher

Why did I read this book: This book has been out here in the UK for a while now and every time I went to Foyles for the past year or so, I eyed it and considered buying it, only to end up buying something else. But then, we got a review copy….in the US. This is an Ana-book though, so Thea kept it for me and I got it when I went to visit last May. THEN, I read this review and I just couldn’t wait any longer to read it.

Twelve-year-old Frankie Parsons is an extremely gifted artist, with a love for birds and languages. He is also a persistent worrier and a hypochondriac, someone with an internal “rodent voice” which constantly nags and niggles about a variety of problems: from groceries that need to be bought, lack of money for the school bus in the piggy-bank to the smoke-alarm batteries that need to be replaced and the spreading rash on his chest which looks like it could be cancer. It feels like no one in his family understands his anxiety expect for his Ma who, every night at 10PM, answers one of his all-consuming questions and chases away his fears – at least for the night. More than anything else in the world, Frankie wishes he could be like his worry-free best friend Gigs and not a creature of habit that has to rely on a well-organised, comforting routine to get through the day.

When a new girl named Sydney arrives at his school this well-guarded routine is shaken by her straightforward, brash, effusive personality. He can’t help but to become friends with Sydney even as he is overcome with the anxiety that comes from the certainty that she will eventually ask the one question that he can’t bring himself to ask and no one in his family will address: why hasn’t Ma left the house in 9 years?

I’ve had The 10PM Question on my radar for a while now but it wasn’t until Things Mean a Lot’s Ana started raving about it that I was compelled to read it. [1. On a side note, we can now single-handedly blame The Other Ana for the direction my reading took this year. 99% of the books I bought in 2011 were purchased because she loved them. I even bought GASP three non-fiction books. I KNOW. The sky is going to fall.] And once again, she was completely right: The 10Pm Question is a wonderful book and I was left speechless by its prose, its insightful story, its plethora of fascinating characters. I am not exaggerating: it took me 5 hours to write these 327 words and I haven’t even started to examine the book yet. And this book deserves to be examined and dissected and I hope to be able to do this in a much less clinical way than it sounded just now.

The 10PM Question is that sort of book that deals with truly momentous events in a quiet, subdued way. It follows its main character as he navigates the stormy waters of his own anxiety and it does so with a lot of compassion, humour and subtlety: it is hard not to feel sympathy for Frankie and his plight and his frustration.

The most fascinating thing for me is how The 10PM Question is a book about mental illness that manages to deal with such a charged, complicated topic with tactfulness and without being direct or overt. It is really mind-blowing how well the author approaches the subject, how softly it creeps up into the writing until it becomes a veritable elephant in the room. But the clever thing is: this mirrors exactly what goes on in Frankie’s life as no one – not his father, not his brother, not his sisters, not his aunties nor his friends – will face or admit the problem with Ma. In a way it makes sense: all of the other characters have reached a point where they have dealt with the problem in their own way whereas Frankie is the youngest, and is approaching the age where he has to question his own environment. It takes a lot of courage and I can’t begin to express how much I loved Frankie, hoped for the best and admired the author for not shying away from an ending that didn’t solve all problems magically but still taking the characters in the right direction.

With regards to the other characters, there is a plethora of quirky, fun, fully fleshed-out secondary characters. Frankie’s family is the epitome of a dysfunctional family with extremely quirky characters but the author avoids the trap of stereotyping by writing every single relationship in depth and with a lot of heart. How can a book be so quirky, funny and silly even as it deals with such emotional topics?

Like for example, this visit to the public swimming pool:

And last Saturday when they’d been there he’d had his annual unsavory collision with a Band-Aid. There was nothing more revolting in Frankie’s view than freestyling your way, innocent and blissful, into the path of a used Band-Aid. In Frankie’s private hierarchy of squeamish experiences, the casual caress of a stained Band-Aid was right up there with accidentally catching sight of writhing maggots in a forgotten rubbish bag. He’d had to get out of the pool immediately and lie on his towel in the sun to recover.

Furthermore: the story is interspersed with interesting breaks between the present and the recent past and it alternates brilliantly between them. The quality of the writing alone was enough to endear the book to me as soon as I started reading it – it is beautiful and nuanced, poetic even, but without slipping into Dreaded Purple Prose.

But beyond prose, story and characters, The 10PM Question is a thought-provoking book. Not only in terms of its own themes as aforementioned but also in terms of how it fits within literature in general; and with my own reading and what I expect from books in particular. It has been an interesting few months for me when it comes to reading and reviewing. I have realised that I expect a lot from books, that beyond simply providing a good story, I expect books at the very least not to be problematic in their portrayal of Potentially Explosive Subjects (sexism, racism, homophobia, just to name a few). In this novel there are two of those P.E.S.: the way Frankie thinks that there is a divide between boys and girls (there are things that are too “girlie” and things that girls cannot do); and how he feels about Sydney’s mother (who might a sex worker), which comes dangerously close to slut-shaming.

Before proceeding any further: as I have said many times before, I don’t expect characters to be perfect or perfect examples of perfect humanity. But there is a MARKED difference between 1) a character behaving/thinking one way and that behaviour being supported/endorsed by the text itself; 2) and a character behaving/thinking one way but the text challenging their views either directly or subtly. For example: a character can be racist or sexist or homophobic without the text being any of those things as long as it is challenged or at the very least acknowledged somewhere in the story. More to the point: even though Frankie thinks those things, the text does not support it. It is, very clearly, his own particular vision of the world and not the truth of the story. There is a really important difference there – at least for me. In this book, Sydney and other female characters present a different perspective in which the divide between boy-things and girl-things is a cultural, artificial construct; and with regards to how he views Sydney’s mother, the feeling comes from his own anger and frustration. Other characters view the mother in a different light and she is portrayed in a very sympathetic way.

This, as I have learnt, is a very difficult thing to pull off especially how the author does it here: without a shadow of didacticism. The 10Pm Question is a prime example of how a book can address those things in an awesome way. Going back to not only The Other Ana’s review but also her series of fascinating follow-up posts at Lady Business about this very subject, I find myself in complete agreement with her thoughts:

I’m in awe of the way de Goldi prevented the thoughts of her close third person protagonist from becoming the only voice that is heard within the story, and try as I might I’m not sure if I can exactly point out how she did it. The 10PM Question is actually a novel that goes beyond my current working theory, because it’s not that slut-shaming and the complex circumstances sex workers find themselves in are exactly central to the story. Yet de Goldi manages to introduce enough plurality into the universe of the novel that Frankie’s anger is shown for what it is and Sydney’s mother is ultimately humanised.

The 10Pm Question is, just like its main characters, a Rara Avis: an unusual, uncommon, exceptional, unique, perfect book.

Gigs never seemed to worry. His life was a steady, tidy progress from one activity to another. He would have a task (breakfast, say; or getting his watch fixed; or doing his trombone practice; or buying an ice cream; or finishing a maths project) and he would just do it. He didn’t think about the nutritional value of the breakfast or the ice cream (Gigs never worried about fat intake). He didn’t stress about his maths ability, or his chances for Boy’s College next year, or his batting average, or whether blowing a sustained forte passage on the trombone might accidentally trigger a brain haemorrhage.

There were no detours and distractions, nor interruptions by any of a catalog of pressing problems. Gigs didn’t worry about his household, his parents, his health, his safety, his future, the probability of earthquakes, terrorism, global warming, or McDonald’s taking over the world. He was a funny guy, and a smart one – and the smartest thing about him, in Frankie’s view, was that he never, ever, ever worried.

Frankie dreamed of having such a disposition. If only you could win a temperament like that in Lotto, or get it through mail order, of bid for it on Trade Me.

Reading next: The Fecund’s Melancholy Daughter by Brent Hayward