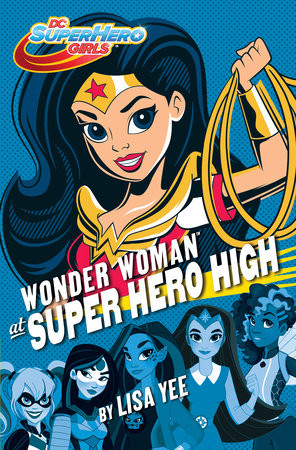 This groundbreaking new middle grade series follows DC Comics’ most iconic female Super Heroes and Super-Villains . . . as high schoolers. At Super Hero High, the galaxy’s most powerful teens nurture their powers and master the fundamentals of what it means to be a hero.

For her entire life, Wonder Woman has lived the secluded and idyllic Paradise Island. With her mother, Hippolyta, as her guide, Wonder Woman has tried her very hardest to be the model princess and future savior of the world. When she receives an email from Principal Waller inviting her to attend world-famous Super Hero High, Wonder Woman couldn’t be more thrilled. With the tentative blessing from her protective mother, Wonder Woman leaves Paradise Island for the first time and heads out for her greatest adventure yet: High School.

Attending Super Hero High with several other potential heroes (and villains) isn’t easy or straightforward–in fact, befriending other teenage super heroes is harder than any other mystery Wonder Woman has ever had to face in her young life. Studious, earnest, and honest to a fault, Wonder Woman struggles first hand with snarky classmates, internet and social media fame, and folks who mistake her eagerness for suck-up-iness. But Wonder Woman is determined–saving the world is a tough job, and the only way she can learn about the real world is to be in the real world. Plus, not everyone is bad–she makes fast friends with Bumblebee (student of the month!), Hawkgirl (athletic and hawk-eyed), Katana (wicked good with a blade and her sense of argument), Harley Quinn (video superstar and Wondy’s roommate), and Poison Ivy (shy but brilliant with experiments and botanical science).

With the help of her new friends, Wonder Woman is determined to figure out who is sending her cruel anonymous notes and why (could it be the ordinary-seeming girl, Mandy, who was expelled just before Wondy started?), crack down on her studies, excel at all of her classes and clubs, and help her school win the Super Triathalon!

Wonder Woman at Super Hero High is, in a word, charming. Written specifically for a tween target audience, this novelized version of Wonder Woman is accessible, fun, and refreshingly unpredictable. (The person responsible for writing Wondy mean anonymous notes is not who you think it is–and the motivation is also really not what you think it is.)

One thing that always daunted me as a kid reader particularly where superheroes are involved is the question “where do I begin?!” There is so much out there for comic book superheroes–so many crossover events and reboots and alternate universes–that it’s hard to know where to begin, or where to point young new readers in particular to get started in the DC Universe. (I usually end up pointing people at animated series’ because those are usually more accessible–and more well-rounded!–than certain other entry points.)

I’m happy to say that Wonder Woman at Super Hero High is a perfect entrypoint for new AND old readers alike–watching Wondy struggle with sarcastic classmates (the jokes go waaaay over her head) and encounter things like sugary cereal, group project saboteurs, and the weight of maternal expectation are universal themes that author Lisa Yee works nicely into this story.

Of course, then there’s Wondy herself! In this new Super Hero High universe, this particular version of Wonder Woman is extremely literal, having grown up a very sheltered and isolated life. She’s not very well socialized, but she DOES hold true to her principles of truth and kindness–with her fierce sense of right and wrong and her desire to make the world a better place, it’s all very awesome to watch. As readers are stuck squarely in Wonder Woman’s internal narrative, we don’t get much insight into other characters in this particular world (also, since Wondy is so trusting and literal, she’s an extremely unreliable narrator (hello, Star Sapphire). That said, as the series will progress and feature new DC Super Heroines at the helm, I expect we’ll get that kind of exposure in time. One thing I was very pleased with, character-wise, is that not all villains are simple villains–Cheetah, Poison Ivy, and Harley Quinn, for example, might have different ulterior motives but they aren’t single-minded villains (or villains at all). Super Hero High is all about potential, after all–potential for good, and potential for evil.

My only critical note is that this book reads extremeley young, which makes me question the choice of using a high school setting as opposed to middle school. That said, as a tween, I definitely read Sweet Valley High in addition to Sweet Valley Twins–so maybe that’s a wise market-targeting move.

One last thing–I absolutely adore the conceit of using a school setting for favorite superheroes (and villains). This book reminded me of one of my favorite guilty-pleasure films, Sky High–but set squarely in the DC universe.

I’m a big fan–and I’ll be back for Supergirl’s adventure next.

Notable Quotes/Parts: Read the excerpt below: