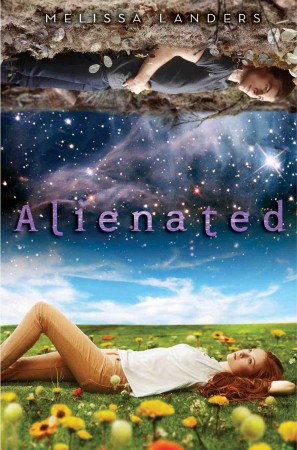 Two years ago, the aliens made contact. Now Cara Sweeney is going to be sharing a bathroom with one of them.

Handpicked to host the first-ever L’eihr exchange student, Cara thinks her future is set. Not only does she get a free ride to her dream college, she’ll have inside information about the mysterious L’eihrs that every journalist would kill for. Cara’s blog following is about to skyrocket.

Still, Cara isn’t sure what to think when she meets Aelyx. Humans and L’eihrs have nearly identical DNA, but cold, infuriatingly brilliant Aelyx couldn’t seem more alien. She’s certain about one thing, though: no human boy is this good-looking.

But when Cara’s classmates get swept up by anti-L’eihr paranoia, Midtown High School suddenly isn’t safe anymore. Threatening notes appear in Cara’s locker, and a police officer has to escort her and Aelyx to class.

Cara finds support in the last person she expected. She realizes that Aelyx isn’t just her only friend; she’s fallen hard for him. But Aelyx has been hiding the truth about the purpose of his exchange, and its potentially deadly consequences. Soon Cara will be in for the fight of her life—not just for herself and the boy she loves, but for the future of her planet.

How did I get this book: Review Copy from the UK Publisher

Why did I read this book: I’ve been in the mood for a lighthearted romantic YA novel, and Alienated seemed to fit the bill.

Cara Sweeny has got everything under control. Valedictorian of her high school, captain of the debate team, star student with her sights set on a cutting career in journalism, Cara’s senior year should be a breeze. Then, the news arrives that Cara has been chosen, one of just three human teenagers worldwide, to house the very first L’eihr transfer student. Ever since the L’eihr made first contact with humanity two years earlier, little is known of the humanoid alien race other than they appear mostly human (although they have telepathic abilities), possess exceptional and advanced technology (including the cure for cancer), and that they value the safety of knowledge over turbulent emotions or progress.

Cara is excited about the opportunity to house her L’eihr student, a young man named Aelyx – even though she wasn’t expecting it, she’ll take the scholarship money and leverage the opportunity to start her journaism career by blogging about her interactions with the alien L’eihr.

Aelyx, however, is not at all what Cara expected. Sure, he’s gorgeous, but completely devoid of emotion; that’s to say nothing of the huge cultural divide between human and L’eihr, evident from different food choices to aversion to physical contact. Still, as the days and weeks pass, Cara and Aelyx gradually begin to understand each other, and even care for each other. Their friendship, however, is put to the test every day as anti-alien groups and xenophobia start rearing their ugly heads. Faced with threats of violence and unabashed hate, Cara and Aelyx fight to keep the peace between their people – the fate of both human and L’eihrkind depend on them.

The first book in a planned series by Melissa Landers, Alienated is an unexpected book. I say unexpected, because at first glance, it looks to be your standard romantic YA fare, featuring a pretty young Earth girl and a studly alien dude uniting over their differences and getting it on. (At least, that was my impression of the book from the cover – see cover note below because whitewashing – and the blurb.) There’s absolutely nothing wrong with that kind of story, and it was what I was expecting going into Alienated. Imagine my surprise, then, when I discovered it wasn’t an instant interplanetary romance, but rather one of the overcoming pride/prejudice variety! And, beyond the romantic heart of the book, it’s also a considered story about tolerance and change. Can I get a hell yes, please?

So let’s talk about the romance first, shall we? Because Alienated is, at its heart, a science fiction romance novel. It’s the story of two unlikely protagonists getting over their differences and collective baggage, and falling head over heels (or should it be over the moon and beyond?) in love with each other. It’s not an easy love story, which I appreciate – it’s a rough road to acceptance, friendship, and beyond for Cara and Aelyx, which makes the payoff all the sweeter when they do realize the depth of their feelings for each other. The reason why the romance works so well, in my opinion, is because Cara and Aelyx exist as separate entities and are wholly believable as independent characters. Cara is driven and true to her own desires, while Aelyx, for all his insistence that he doesn’t stoop to human emotions, actually has a huge reservoir of emotional depth. Part of this character success also comes from the fact that the book is written in an alternating third person narrative, switching from being inside both Cara and Aelyx’s narratives. This style gives both characters a distinct voice, but it feels less gimmicky than many he-said-she-said alternating first person narratives, and less internalized than just being inside one character’s head (both popular techniques in YA paranormal and SFF novels, especially of the romantic persuasion).

It’s also worth noting that neither of the characters likes the other very much to begin with (I’m always a sucker for that kind of romance). Aelyx is distant and cooly superior despite Cara’s attempts to make him feel at home, and both have their own separate priorities. Cara, for example, juggles with the stress of housing the first L’eihr student and the hostile, judgmental fallout from her fellow human students, as well as resentment from her boyfriend and her best friend (both boyfriend and best friend distrust the L’eihr implicitly because they fear Aelyx and his kind have nefarious plans for humanity). Amid this tension, there’s a gradual dependence and trust that blossoms between both Cara and Aelyx – a relationship that is delicious to watch unfold. One last word on the romance – which, thankfully, avoids the trap of instalove and seems to be triangle-free (although a part of me worries about future love geometry with the ending of the book). I love that both Cara and Aelyx are wonderfully different from each other, and united in doing what they think is the right thing for their respective species.

But let’s go beyond romance now, shall we? Beyond the romantic angle, Alienated is so compelling because it actually delves into the meatier issues around human-alien contact. On the human side, there’s fear when humanity realizes that they aren’t at the top of universal food chain and ensuing rampant xenophobia. It’s ugly, but the actions of Cara’s peers, the death threats, the political protests and motions against the L’eihr are all (sadly) within the realm of reason. On the L’eihr side, things aren’t exactly rosy, either. It turns out that the L’eihr are a stagnant society that, for all its advancements in science and intellect, is dying slowly because of its lack of diversification. The L’eihr’s problem is a resistance to change – on a genetic level (the L’eihr have resorted to using cloned DNA for their new generations), and on a larger societal level. Add to this the stagnation on the L’eihr’s ruling council and distrustful resentment of the younger L’eihr generation – including the resolute Aelyx – and you’ve got a very volatile environment.

All these things to say: I enjoyed this book very much. Alienated is a romance with heart and depth, and I cannot wait to return to Cara and Aelyx’s story in book 2. (Especially as it looks like book 2 is all about Cara, learning to adapt and exploring the L’eihr world!) Absolutely recommended.

A Note on the Cover: Alienated looks like it’s boasting yet another whitewashed YA cover. Aelyx, the guy at the top of the cover, is supposed to have russet/red-brown skin – all of the L’eihr are desribed as such.