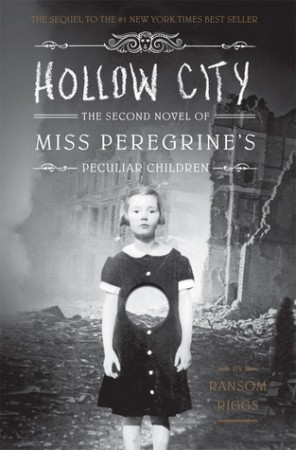 Miss Peregrine’s Home for Peculiar Children was the surprise best seller of 2011—an unprecedented mix of YA fantasy and vintage photography that enthralled readers and critics alike. Publishers Weekly called it “an enjoyable, eccentric read, distinguished by well-developed characters, a believable Welsh setting, and some very creepy monsters.”

This second novel begins in 1940, immediately after the first book ended. Having escaped Miss Peregrine’s island by the skin of their teeth, Jacob and his new friends must journey to London, the peculiar capital of the world. Along the way, they encounter new allies, a menagerie of peculiar animals, and other unexpected surprises.

Complete with dozens of newly discovered (and thoroughly mesmerizing) vintage photographs, this new adventure will delight readers of all ages.

Stand alone or series: Book 2 in the Miss Peregrine series

Why did I read this book: I loved Miss Peregrine’s Home for Peculiar Children very much and have been eagerly awaiting this book ever since. I was ecstatic when a copy finally made its way to my doorstep!

1940, England. Miss Peregrine’s home, a haven for youngsters with peculiar gifts, has been bombed, the protective time loop shielding the children from the outside world shattered. With frightful hollowgasts and cruel wights honing in on the ruins, the defenseless children flee in the night with Miss Peregrine – trapped and injured in bird form – in tow. Desperate for help, Jacob, Emma and the other peculiar children strike out to find other loops and ymbrynes who can help restore Miss Peregrine to her human form before she forgets her true self and is stuck as a mere bird forever. Their journey takes the children through woods and atop cliffs, on leaky boats and swanky first-class cars on trains, even across the bomb-strewn ruins of Blitz London itself. Jacob and his nine peculiar friends will travel anywhere, in any time loop necessary, to save their beloved Miss Peregrine, and each other.

Continuing immediately where Miss Peregrine’s Home for Peculiar Children leaves off, Hollow City is more of the same as its predecessor – danger, strange children with all order of strange gifts,and a story punctuated by delightfully creepy antique photographs. While Hollow City is a fun adventure-filled novel and more of the same, it’s not quite as memorable or magical as the first book. Instead, book 2 is very much an “on the run” tale, a bridge book, in which much time is spent as the peculiar children dash from location to location without much actually being accomplished in terms of overall story progression. While frantic scene changes and ever-present danger is entertaining overall thanks to Riggs’ deft writing, it becomes a little desensitizing and wearisome by novel’s end. This, of course, is exacerbated by the fact that at novel’s end, after some 350 pages of not much actually happening, all the twists happen. Very cool twists, mind you, but frustrating because I’d rather spend more time with those developments, as opposed to lengthy descriptions of boat-rowing or caravan-jumping travelogues with a Romani group (who are referred to in this book as “gypsies” repeatedly and exclusively, making a vein in my forehead throb dangerously). This lopsided plotting also in turn affects the enjoyment factor of Hollow City, as there’s only so much peril and so many run-ins with danger that one can bear before it all starts bleeding together or getting hokey. Not to mention there’s plenty of convenient happenstance to bail our intrepid peculiars out of each new ominous threat (bullet-proof clothing, anyone?). Also, WHY are peculiars so ubiquitous and easily found?! I digress.

On the character front, however, I’m happy to say that Hollow City is a great improvement on Miss Peregrine’s Home for Peculiar Children. Having already met Miss Peregrine’s strange young brood, Hollow City spends time getting to know them as people – and for the most part, Ransom Riggs does a bang-up job (at least with 6 of the main characters). This is Jacob’s story, and in Hollow City he truly comes into his own as a young man and a peculiar. Jacob learns how his power manifests and even how to hone and weaponize his ability to sense hollows, and he also comes to embrace the budding emotions he has for fellow peculiar, Emma (a fantastic character in her own right). A firestarter, a leader, devastatingly confident and optimistic, Emma glows with the force of her personality (and it’s no wonder the more reserved Jacob falls for her). Other standout characters in this particular volume are the exasperating Enoch, sensitive bee-keeper Hugh, super-strong Bronwyn, scholarly Millard, and sweet young Olive.

One final note on the characters: I also love the idea that these are children in appearance but not in age; they are children who have lived the same day for decades, protected by Miss Peregrine’s loop in time. In one exchange, for example, Emma tells Jacob that she’s an old woman, that he has his whole life ahead of him, that she’ll turn to dust long before his time is up. In my opinion, this is where Hollow City shines brighter than its predecessor: the story of these outcast children is incredibly sad, and Hollow City tells their tale as real people, as opposed to the gimmicky kids with strange superpowers presented in Miss Peregrine. These are children who have been rejected by their families, shunned by society, and hunted by monsters (both human and otherwise). But these children have found a home with Miss Peregrine, and happiness with others who understand and accept their peculiarities – of course they will do anything to save their beloved Miss P, and their way of life.

Finally, I’d be remiss if I didn’t at least mention the photographs that tell a parallel story to Riggs’ prose. Plenty has been said about the gimmick of creepy photographs in the first book; how the story was written around some cool images instead of vice versa. Apparently, Riggs went about writing this second novel in a different fashion – writing the story first, then finding images that suited the text. (I’m not entirely sure I buy that on the whole; the cover image, for example, is a purely tangential exchange with the peculiar children thrown in for creep-factor, as are some of the circus images in the last 50 pages of the book.) All that said, the images are so deliciously creepy and fantastic, I can easily forgive minor clunkiness in attempts to integrate those images to the text.

Ultimately, Hollow City is an entertaining, if lopsided, trip. And when you end a book with that kind of cliffhanger? Well, it’s easy for me to say that I’ll certainly be back for more. 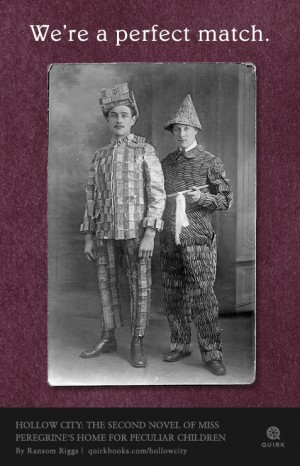 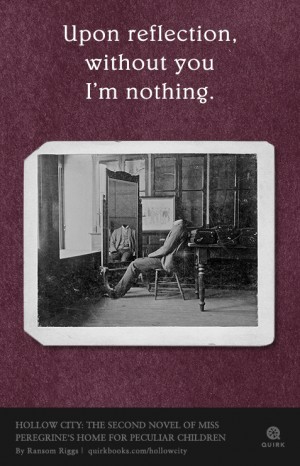 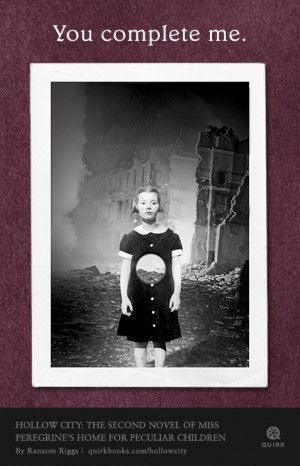 Books to look forward to!