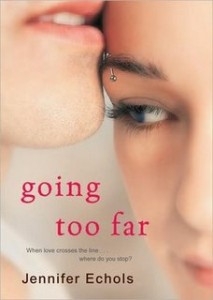 Summary: All Meg has ever wanted is to get away. Away from high school. Away from her backwater town. Away from her parents who seem determined to keep her imprisoned in their dead-end lives. But one crazy evening involving a dare and forbidden railroad tracks, she goes way too far…and almost doesn’t make it back.

John made a choice to stay. To enforce the rules. To serve and protect. He has nothing but contempt for what he sees as childish rebellion, and he wants to teach Meg a lesson she won’t soon forget. But Meg pushes him to the limit by questioning everything he learned at the police academy. And when he pushes back, demanding to know why she won’t be tied down, they will drive each other to the edge — and over….

Why Did I Read The Book: Author Victoria Dahl raved about it back in December in her Smugglivus Post. I wanted to read it ever since.

I will just go ahead and start this review saying that I had a most unpredicted, emotional reaction to this book: I could not stop reading it once I started and I stayed up until very, very late in order to finish it. I haven’t done this in quite a while, possibly years. After I was done reading, I just laid in bed unable to sleep, thinking about the book, rehashing the scenes in my head, letting it all sink in, feeling the story.

The basic plot of Going Too Far is very, very simple: it starts when 17 year old Meg, the protagonist, and a few of her friends (including her good-for-nothing boyfriend Eric) head out to the railway bridge. The bridge is off-bounds but kids keep going back there for dares and it’s rumoured that a couple died in a terrible accident years ago. They are busted and arrested by Officer John After whose life mission is to patrol the bridge and Meg’s punishment for trespassing is to ride with Officer After – who turns out to be only 19 years old – for a week in his police car.

Even though the plot is simple, at its core Going Too Far is an extremely complex character-driven story. The story is set in a small town in Alabama – a town that Meg needs to leave behind whereas John has chosen to stay. The University she will be attending is only 20 minutes away and those 20 minutes are everything to her: her freedom, her future. Meg is determined not to get close to anyone, to anything. She needs to get out and it’s only a few more weeks until she can do just that. She is all for partying, having sex, living la vida loca – she is a Bad Girl. John, on the other hand has chosen to stay, to become a steady policeman and his serious, uptight stance and his need to stay put, and take care of that bridge is as much as important to him as being aloof and getting away is for Meg. They are completely driven characters but they run in opposite directions – those 20 minutes have a completely different meaning to each of them. Until that is, those moments they sit together in that police car for those 5 nights.

5 nights of teasing, threatening, pushing each other to their limits. Each sees in the other what they can’t see in themselves. And as they drive around, they unwittingly unveil what they would like to keep hidden. Both characters are extremely observant and extremely sensitive and that allows them call on the other’s bullshit and to push. And to push they do until them both end up yes, going too far.

What they go through in these 5 nights is like Shock Therapy 101: these are characters with Baggage with a capital B that are utterly, unable to let go. This is a very difficult book to review because a lot of what happens, a lot of the information that is slowly revealed to the reader and to the characters about each other’s traumatic past cannot, should not be spoiled.

What I can say is that, this is an extremely well-written, beautiful book, a book with so many layers and a richness of details that is profoundly moving. Like the difficult relationship between Meg and her parents; or the easygoing one between John and his friends and how as he is close to them he becomes the 19 year old that he is.

Mostly, the way the relationship between Meg and John moves and changes and grows and expands in those 5 days in a realistic way. From the first impression to the gradual process of discovery: in the way John knows the exact shades of blue in her hair or how she notices he has a different way of saying “Police Academy” as though he is making fun of it. How she notices he starts wearing cologne and hopes it is for her, how he listens to the unusual songs whilst he is driving. The attention they pay to the details that show how much they want each other and how the sexual tension builds and gathers momentum. They get into each other’s skin in a way that is palpable and so very raw because as mentioned above , all of this happens whilst they are making the other revaluate their lives and that is never, ever easy. Meg and John are lovable, admirable characters that have made me cry, laugh and root for them to get well and to get together. And I completely fell in love with both of them.

Going Too Far delves in universal themes such as despair, life and death but above all, hope and love. It is an amazing story that is both simple and complex; funny and witty but also moving and raw; frank and even somewhat brutal and Jennifer Echols beats her characters down to emotional exhaustion and takes the reader along for a difficult ride but in the end? Oh, in the end she rewards us all, characters and readers alike. I believe it is physically impossible to finish this book without a smile in the face.

Character-driven novels are my favourites, especially romance such as this one and Going Too Far is a precious gem. I am beating myself up for not reading it sooner but now that I have, it goes straight into my top 10 of 2009 – no question about it.

Notable Quotes/ Parts: a typical interaction between Meg and John

“Why don’t you want people to ask you questions?”
“I guess I feel like I don’t have very good responses”
“Responses,” I repeated. “See there? That’s another thing you do. You use words that distance you from what you’re talking about. Responses instead of answers. Vehicles instead of cars. Weapons instead of guns, What do you call these?” I touched my jeans.
“Denim trousers”
“What do you call this?” I touched the demure part of my shirt.
“Chemise”
I put my hands to my face. “This?”
“Visage”
I touched my hair.
He turned off the main road, onto the dirt road through the woods that led to Martini’s. Yes, everything in this town was at the end of a dirt road through the woods.
He looked over at me. “Indigo,” he said. “Cyan”. He glanced at the road in front of him, glanced at me. He reached over and ran his fingers down one of the darkest strands in the back, where I’d used a little purple. “Violet.”

Verdict: An amazing character-driven story of love and hope and loss and despair that is funny and emotional in the best of ways. One of the best books I read this year. Highly recommended to YA and adults – above all, recommended to those that love romantic stories.

Reading next: The Poison Garden by Sarah Singleton