The Middle Grade Review Bonanza is a new feature of 2-3 mini-reviews for short (typically 250 pages or less) MG books we both really wanted to read. It’s a new Regular Thing (and we’d love to hear your thoughts and recommendations for future entries).

I’ve been meaning to do a new round of Middle Grade reviews and I had several 2013 releases on the TBR Mountain I wanted to read, so here we are. 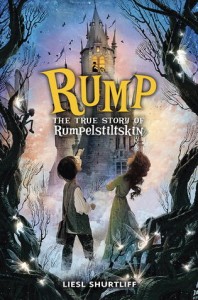 In a magical kingdom where your name is your destiny, 12-year-old Rump is the butt of everyone’s joke. But when he finds an old spinning wheel, his luck seems to change. Rump discovers he has a gift for spinning straw into gold. His best friend, Red Riding Hood, warns him that magic is dangerous, and she’s right. With each thread he spins, he weaves himself deeper into a curse.

To break the spell, Rump must go on a perilous quest, fighting off pixies, trolls, poison apples, and a wickedly foolish queen. The odds are against him, but with courage and friendship—and a cheeky sense of humor—he just might triumph in the end.

Rump (Alfred A. Knopf Books for Young Readers; April 2013) is a retelling of Rumpelstiltskin, from his point of view. In this imagining, Rump is a 12-year-old boy who lives in a magical kingdom where names are a person’s destiny. To his frustration, Rump’s mother died before she was able to say his complete name and he has spent all his life wondering what his full name is – and what having an incomplete name means for his destiny. When he finds his mother’s old spinning wheel and discovers he is able to spin straw into gold, he thinks his problems are now sorted. Until he realises that magic like this comes with a price: for every gold piece he weaves, a bargain must be made. But unfortunately for Rump, he has no control over those bargains.

Rump was quite charming and entertaining although not without many flaws. On the plus side, I loved the themes explored here about controlling magic (instead of letting it control you) and about the importance of names (is your name YOU?). This is also a story about choices and free will and although not particularly outstanding, there was enough here to make Rump an enjoyable read. I liked Rump’s quest, the discovery of his full name (and what it meant) and I loved his relationship with his best friend Red.

That said, it’s been a few days since I finished reading it and its problems have become more obvious in my head. For example, there is a lot of uncomfortable fat shaming when describing its main villain. I was also uneasy with the portrayal of Opal, the miller’s daughter who never has any control over her destiny between her father’s machinations and Rump’s attempts to help her. She is almost always referred as “Poor, beautiful Opal” and for some reason that is never really explored or explained she is described as having her “tongue sticking out and rolling around her mouth” (is this a sign of her being stupid or slow-witted?) And as much as I loved Red and her fierceness it made me a bit sad that in the end she had to be saved by Rump.

Mixed feelings on this one. 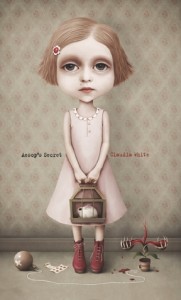 Melinda and Felix Hutton are just an ordinary pair of siblings, until their parents confess that they have all inherited the talent of metamorphosis, a revelation that begins to unravel the children’s world. Ten-year-old Melinda embraces her Athenite heritage, but her efforts often end up leaving her freckled face attached to feathered body with a twitching rat’s tail. Her older brother Felix doesn’t greet this new reality as something to celebrate. Wishing he were normal, Felix resents becoming parts of the myths and fables he’s read. But there’s a threat rising just as the children are learning of their talents, and a powerful enemy will use every trick and tool he has to keep the family from letting slip the secret of their gifts. With only the help of Melinda’s pet rabbit Aesop, who has begun acting awfully strange lately, Felix and Melinda determinedly fight back against the suffocating grasp of those who want to drive the Huttons and their kind back underground.

I was browsing at The Strand and came across this little book with this amazing cover and I just had to have it. How funny (not really) that the amazing cover that sold me the book turned out to be a lie? Because the character it depicts is supposed to have curly brown hair and freckles all over her face. Grumble grumble, I am done complaining about the (still amazing) cover now.

Aesop’s Secret (MP Publishing; May 2013) follows a pair of siblings – Melinda and Felix – who are as different as day and night. Buttoned-up serious Felix wants nothing to do with his family after it is revealed that they are all Athenites – people with the ability to transform into animals at will – whereas Melinda eagerly embraces the news. But as Melinda is starting to learn to deal with her talents a dastardly villain kidnaps her father and puts Felix to sleep (literally). Only Miranda and her pet rabbit Aesop (who has a secret) can help.

Aesop’s Secret reads more like a novella with a very short and focused story. It is a very quirky story with a side of Horror and villainous scientists. Although the characters are not exactly well-developed in depth, the story is still quite fun and engaging. I especially loved Miranda, how excitable she was, how gross she could be and the way that she so eagerly wants to turn into all sorts of animals (ha, even a giant frog). This reminded me of Jack Gantos’ books. 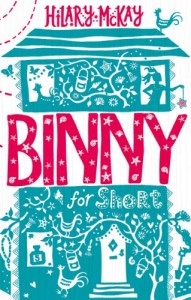 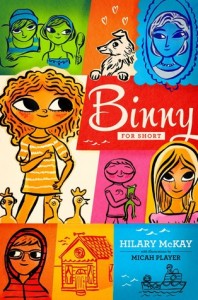 When she was eight, Binny’s life was perfect: She had her father’s wonderful stories and Max, the best dog ever. But after her father’s sudden death, money is tight, and Aunty Violet decides to give Max away—he is just too big for their cramped new life. Binny knows she can’t get her dad back, but she never stops missing Max, or trying to find him. Then, when she’s eleven, everything changes again.

Aunty Violet has died, and left Binny and her family an old house in a seaside town. Binny is faced with a new crush, a new frenemy, and…a ghost? It seems Aunty Violet may not have completely departed. It’s odd being haunted by her aunt, but there is also the warmth of a busy and loving mother, a musical older sister, and a hilarious little brother, who is busy with his experiments. And his wetsuit. And his chickens.

Surprising no one, Binny for Short (Margaret K. McElderry Books/Hodder; July 2013) Hilary McKay’s new book is amazeballs. Just like her Casson Family series, this focuses heavily on familial problems and relationships with a lot of heart and humour.

Binny’s family are not having the time of their lives. The father’s sudden death has catapulted the family into a spiral of loss and economical strain after they lose everything. Even worse for Binny is the fact that her beloved dog Max was given away and she never learnt what happened to him. Although her obsession with Max is Binny’s most obvious motivator there are other important things happening too like their family move to a new house and her relationship with her new frenemy Gareth (after Binny’s OTHER enemy has also died).

And if this is somewhat feels just like the Casson Family books, this comparison is only in the best possible way. Because there is so much heart here and compassion and shrewd observations (oh the mother, and her bravery and her industriousness) just like in those other books including the way that the narrative sometimes hides things in plain sight. And although familiar-sounding, this is also completely unique. The relationship between Binny and her nemesis Aunty Violet is one of the bets things I have ever read because it’s hard and maybe even a bit cruel.

And then there is James. The six-year-old baby brother obsessed with getting all sorts of animals into his home. I loved everything about the book but James made me laugh so hard I cried.

‘I’m getting chickens,’ he told the old ladies, and they did not argue as his family would have done.

They said, ‘I thought you young ones were all into computer games these days,’ and, ‘Chickens. Well.’

Some of them were actual chicken experts and gave him mysterious, chicken-flavoured advice. ‘You don’t want a rooster.’ ‘Turn them over twice and you can fold them up like a package.’ ‘They’ll bring in the foxes.’ ‘They’ll clean up your snails.’

James’s toes curled with excitement as he absorbed this information. At night in his bedroom he replayed the words again in his head. Turn them over twice? But how? And over what? Surely a rooster would be magnificent? Exactly how would a chicken set about cleaning a snail? Like Kate’s cat cleaned her kittens? Would they really bring in the foxes? Where would a chicken get a fox? Did the chickens at the old people’s home bring in foxes?

How interesting is it that the most magical of these three books is a book that has no actual magic at all in it?

Over at Kirkus: Two Serpents Rise by Max Gladstone